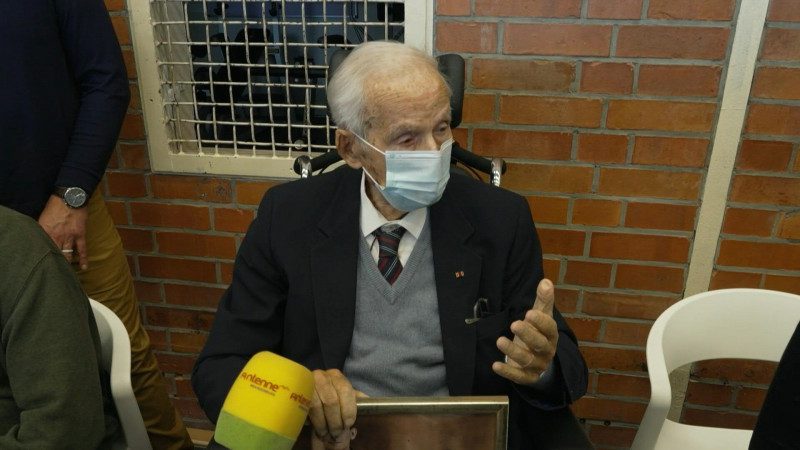 A German court has sentenced a former Nazi concentration camp guard to five years in prison.

101 year-old Josef Schuetz maintains he did nothing wrong and was unaware of any crimes being committed at the Sachsenhausen camp in Oranienburg, north of Berlin, where he worked from 1942 to 1945.

“I don’t know why I am here,” he said at the close of his trial on Monday.

But prosecutors said he “knowingly and willingly” participated in the crimes as a guard at the camp and successfully pushed for a five year sentence.

More than 200,000 people including Jews, Roma, regime opponents and gay people were detained at the Sachsenhausen camp between 1936 and 1945…

The allegations against Schuetz include aiding and abetting the “execution by firing squad of Soviet prisoners of war in 1942” and the murder of prisoners “using the poisonous gas Zyklon B”.

During the trial, Schuetz made several inconsistent statements about his past, complaining that his head was getting “mixed up”.

At one point, the centenarian said he had worked as an agricultural labourer in Germany for most of World War II, a claim contradicted by several historical documents bearing his name, date and place of birth.

After the war, Schuetz was transferred to a prison camp in Russia before returning to Germany, where he worked as a farmer and a locksmith.

Schuetz has remained at liberty during the trial, which began in 2021 but has been delayed several times because of his health.

Despite his conviction, he is highly unlikely to be put behind bars given his age. He intends to appeal, his lawyer Stefan Waterkamp told AFP.

Richie Allen is the host of The Richie Allen Radio show, Europe's most listened to independent radio show and is a passionate supporter of free speech. He lives in Salford with the future Mrs Allen and their two dogs.
All Posts
5 2 votes
Article Rating
Login
Please login to comment
11 Comments
Inline Feedbacks
View all comments

This is what pisses me off.

But we just can’t arrest pedophile MPs such as Grenville janner, Cyril Smith, Leon Brittan & god only knows how many others.

It’s my opinion & no one will convince me otherwise

”I didn’t know what i was doing, i was just following orders.” This is another thing the 101 year old Nazi guard probably said. From the documentaries iv seen, and having spent some time doing some searches on the net. It is believed that the SS were primarily running and guarding the concentration camps. Though there may have been some Luftwaffe . Further more, it is likely that many of the guards volunteered for the job.

The SS was originally part political wing and part Hitler’s personal bodyguard, and were very small in number. They later grew in number, and took on other roles. But they never made up more than 5% of the regular army. To be in the SS, you had to show that you believed in racial purity and agree not to marry some one, who was not ‘racially pure’. It is known in occult circles and by historical researches that Hitler was a Black magician. And that he along with many SS, carried out satanic type rituals. The SS were the hard core fanatic’s and not regular soldiers. I personally believe as others do, that the holocaust was a giant ritual sacrifice. This was almost certainly one of the reasons behind it.

If your a Jew hating inadequate, and the only way to get sexually excited, is to torture, humiliate, starve, rape and gas defenseless men, woman and children. Rather than a real man who would be fighting on the battlefield and risking his life. It would make perfect sense if they were volunteering to be guards as speculated.

” Why am i here, i dont remember anything”. Tell it to someone who cares, i have zero sympathy. This thing has lived free for years to a ripe old age. Now justice has finally caught up with him, 5 years is a joke. It matters not one bit to me his age. I expect his victims would be saying the same thing if they were able. Its a shame that all the perpetrators of the recent mass killings will not even serve 5 months.

I will take that red tick as a badge of honor.

I mean no offence as i’m sure you are a good guy but that is the worst post i have ever seen on this site. Almost everything you have written is utter tripe but i am not allowed to address it in detail for fear of being suspended. That hurts, but sadly that’s how it is. I will find it hard to take any of your future posts seriously.

I mean no offence, but i think you saying i write tripe is tripe. And i think its obvious where your offence at my posts comes from, and its from somewhere very warped and dark. As regards my posts, iv posted many things on different subjects since the very beginning January 21. Usually very well thought out and well written posts. And had much positive feed back over the last 18 months. I dont know everything, but due to my background. I have a wide and broad knowledge on several unusual subjects. Due to decades spent not just in study, but in experience and practice. I also pick things up by psychic means as well. In many ways all this gives me a unique perspective. If you think that’s arrogant so be it, but its a fact non the less. Lets make this our last communication. As I’m pleased to say, its very unlikely we have anything in common.

This is virtue-signalling nonsense. If you weren’t there, you don’t know how any individual comported himself. Your mentality would appear to be the product of war propaganda and an unending torrent of fictional stories generated in the Hollywood illusion factory. .

If Mr. Schuetz is to be found guilty, what of the corporations who both supported Hitler’s regime and profited from it?
What of Audi-Volkswagon? What of Mercedes who provided Hitler with his ceremonial car? What of BMW, owned by the same family today as the one who backed Hitler? What of Bayer, who were part of the conglomeration that made up IG Farben – the manufacturers of Xyclon B? What of IBM who produced the proto-digital personal IDs for the slave labour force? What of Siemens who exploited the labour force at Ravensbruck and ran an industrial plant at Auschwitz? What of Ford who provided the first engines for many of Hitler’s tanks? What of the Warburg owned pharmaceutical company that operated in Hitler’s Germany?

If none of them are to be held to account then why is a 101 year old ex-lowly soldier?

Yip I agree but would like to add: lets not forget the American government, Operation Paperclip. What about that Gaza place, former British Prime Minister David Cameron called it a “prison camp.”? Surely we need to take a good look at our selves for taking the money to keep quiet.

Sounds like a political conviction to me.
Personal feelings aside, soldiers are trained, more than any other, to follow orders – which is what this chap obviously did.
Conscientious objectioners (the few that would have existed) in that regime were executed for dereliction of duty, so what else was Schuetz meant to do?

Besides, how much research must there be to prove that most people tend to follow orders or instructions without question? The last couple of years has firmy clarified that point as every societal level.

Curiously enough, a great deal of modern equality and diversity training is about trying to see things through the eyes of another (much like the ‘walk in their shoes’ idea), but that concept requires things like empathy, nuance and context – all of which seems increasingly lacking.
It could very well be completely lacking for Mr. Schuetz.

I agree with you Craig. The comments i would like to make about this would see me suspended from the site as i have been in the past, therefore free speech is strictly limited even here. I understand why, but it’s hugely frustrating.

Yip, I was just reading about how American soldiers during the 1917-18 influenza con, where subjected to the most horrendous experimentation to see if they could be infected with the disease, all just following orders, Sir.