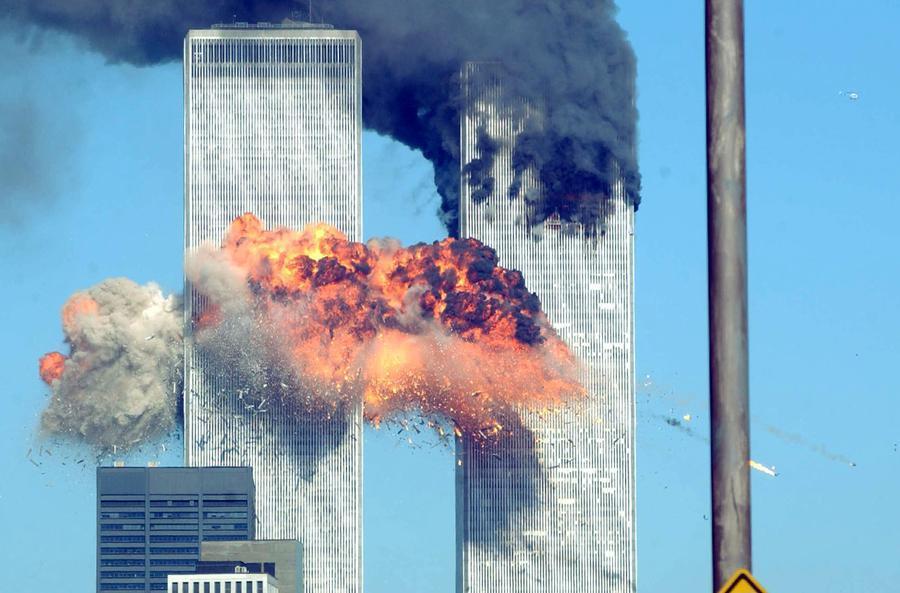 A Few Facts About 9/11 That Just Might Make Your Friends & Family Look Again.

I’ve never been one to offer unsolicited opinions on news and current affairs when chatting with folks. It’s just not me, even though God knows I am a gobby opinionated old sod. I’ve always believed that if someone wants your opinions on the Tories, Corbyn, Climate Change, the price of oil etc, they will ask you. However, since I began making conspiracy research radio and TV shows, old friends and family have on occasion, asked me to prove to them that there is substance to any of the conspiracy theories featured on my shows. What do I do? Well first of all, I tell them that I honestly cannot prove anything, but that what I can do, is show them that there are some facts, facts mind, that have never been disclosed, let alone investigated further by the global mainstream media. There are more holes in the official narrative of what happened on 9/11 than a Swiss cheese. But, when speaking to the unconvinced, the perplexed (coined by the great Jeananne Crowley), I prefer to say “consider this” rather than “here’s proof!” People tend to react pretty negatively to being told “you’re wrong!”

Here are a few things you might know, but the vast majority of your family and friends do not know, because the media has failed utterly in informing them. Thomas Kean was the chairman of the 9/11 commission. The US government set up the commission to investigate what happened on 9/11. He was given $3 million to conduct the investigation of the deaths of nearly 3,000 Americans. Yes, you read right. $3 million. Can you guess how much money congress allocated for the investigation into Bill Clinton’s sex life? No? Okay. They spent $65 million on finding out whether or not Bill had oral sex with an intern. 3,000 killed by terrorists? Throw some loose change at it. Billy’s Blowjobs? Give the investigators a blank cheque. 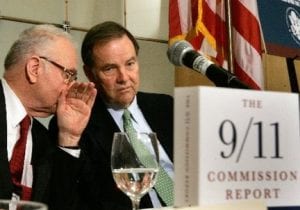 Back to 9/11 commission chairman Thomas Kean. In August 2006 he co-authored a book about his experience of investigating 9/11. In it he says that the 9/11 commission was “set up to fail” and that “the commission was so frustrated with repeated misstatements by officials from The Pentagon and the Federal Aviation Administration during the investigation, that it considered a separate investigation into possible obstruction of justice by Pentagon and FAA officials”. Did you just read that? The man charged with investigating 9/11 said he was hampered at every turn, to the point that he looked into possibly bringing obstruction charges against the various justice departments. Most people in the world today, do not know this, because their TV and radio stations and their newspapers have not investigated this further and are not only not informing them, they are wilfully keeping this information hidden.

Did you know that just one week before the attacks somebody or somebodies made stock market bets that the share price of American Airlines and United Airlines would plummet drastically? You didn’t? That’s because the media didn’t report on it. Yes, Rolling Stone magazine mentioned it and it was mentioned sporadically in American newspapers, but it wasn’t covered or investigated properly by CNN, FOX, NBC, CBS, C-SPAN or any of the nationals. Mindy Kleinberg lost her husband Alan on 9/11. In March 2003, Mindy gave a statement to The National Commission on Terrorist Attacks Upon the United States. Here’s what she said:

“In the week prior to September 11th both the SEC and U.S. intelligence agencies ignored one major stock market indicator, one that could have yielded valuable information with regard to the September 11th attacks. On the Chicago Board Options Exchange during the week before September 11th, put options were purchased on American and United Airlines, the two airlines involved in the attacks. The investors who placed these orders were gambling that in the short term the stock prices of both Airlines would plummet. Never before on the Chicago Exchange were such large amounts of United and American Airlines options traded. These investors netted a profit of at least $5 million after the September 11th attacks. Interestingly, the names of the investors remain undisclosed and the $5 million remains unclaimed in the Chicago Exchange account. Why these aberrant trades were not discovered prior to 9/11? Who were the individuals who placed these trades? Have they been investigated? Who was responsible for monitoring these activities?”

Great questions Mindy. It’s been fifteen years since Mindy’s testimony and she’s still waiting for answers. It’s hard to fathom that eh? That your media hasn’t ever followed that paper trail? Ah well, nothing to see here. I could be here all day. The FBI confiscated dozens of videotapes from security cameras belonging to businesses and properties near The Pentagon. These video tapes would have shown Flight 77 hitting The Pentagon. Why were those tapes (literally hundreds of tapes by the way) confiscated? Why have we not been shown footage of Flight 77 approaching or hitting the building? Why did the BBC report that Building 7 of the World Trade Center had collapsed because of fire, while the building was still standing behind the reporter? It collapsed later of course and it wasn’t hit by a plane? Why do 2,500 eminently qualified architects and engineers continue to say that the planes could not have brought down the buildings and why are they ignored by the media?

But I’ll leave you with this. Again, irrefutable. Again neither reported nor properly investigated by the mass media. The New York Times reported that a group of men had set up video cameras aimed at the Twin Towers prior to the attack  and were seen congratulating one another afterwards. The men were arrested by New Jersey Police and were later deported back to the country they came from, Israel. 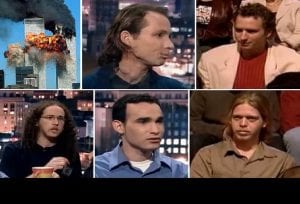 Back home In Israel, the men gave television interviews about their experience. They denied that they were laughing or happy on the morning of Sept. 11. One of them said “The fact of the matter is we are coming from a country that experiences terror daily. Our purpose was to document the event.”  Document what event? Did they know something was going to happen in New York that day? Why is it that the vast majority of US men and women do not know of these five men?

Well I suppose that TV and radio shows like mine will just have to continue chipping away at people. And not to brow beat them or to ram our opinions down their throats. You know, I prefer to ask people for their opinions. What do you think about what Thomas Kean said in his book? What do you think about the insider trading? I believe we should see the tapes of Flight 77, what do you think? Are you curious to hear a bit more from the thousands of learned men and women who say that jet fuel couldn’t have weakened the steel and caused the catastrophic collapse, certainly not in such a short time? I believe that the official explanation for 9/11 is ludicrous and utterly risible. But I won’t inflict that on anyone. Because ultimately everyone has the answers. We just have to ask them the questions.

Richie Allen is the host of The Richie Allen Radio show, Europe's most listened to independent radio show and is a passionate supporter of free speech. He lives in Salford with the future Mrs Allen and their two dogs.
All Posts
5 1 vote
Article Rating
Subscribe
Login
0 Comments
Inline Feedbacks
View all comments