Are You Addicted To Your Smart Phone? Go On, Take This Test It Just Might Change Your Life.

The next time you are in the company of a group of people, casually observe how often someone in the group checks his/her phone. You'll find it happens constantly. Someone is always pulling a phone from a pocket or a bag, glancing at it and putting it away again, that's if they don't leave it on the table where they can glance at it every few seconds. We are a nation of addicts. Get this. Back in 2012, digital solutions firm SecurEnvoy conducted a nationwide study which found that 66% of the population has some form of Nomophobia. Nomophobia is the fear of not being able to use your cell phone or other smart device. 66% of the population is a staggering figure, if it's true of course and I suspect it is. But wait a minute, the study was undertaken in 2012 and the results published exactly six years ago this week. If it was accurate then, what do you imagine the percentage of people with Nomophobia in the UK is today? 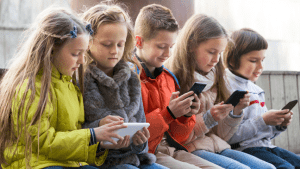 Last November, researchers at Korea University in Seoul published a very important paper which claimed that smart phone usage impedes brain function. There was little fanfare unsurprisingly. It should have made the international headlines, but it didn't because Apple, Sony, Samsung and the rest, spend hundreds of millions of pounds with TV networks, to flog their devices. Yes, this is yet another example of corporate interests dictating the editorial. Scary huh? The Korean scientists used brain imaging to study the brains of 19 teenage boys who were diagnosed with internet or smartphone addiction. Compared with 19 teenagers who were not addicted, the brains of the addicted boys had significantly higher levels of GABA, a neurotransmitter in the cortex that inhibits neurons, than levels of glutamate-glutamine, a neurotransmitter that energizes brain signals. In plain English, smart phone usage slows down the brain, affects attention span and your ability to control your thought process. Dr. Hyung Suk Seo, professor of neuroradiology at Korea University who led the team of researchers also revealed that the phone addicted teens who took part in the study, suffered depression, anxiety and insomnia.

Take your child's phone away. Do it now. Ignore the tantrums and the hysterics. These devices are killing your children. That is not an exaggeration. They are rotting the brains of the young just as much as if you were injecting them with crack cocaine. Throw your own away while you are at it, or at least practice turning it off when you are not using it. Only turn it on to make an essential phone call then turn it off again. Delete the Facebook and Twitter apps. Do it. Do it today. Show your child the example. Caglar Yildirim, an assistant professor of human computer interaction at State University of New York at Oswego designed a questionnaire. Try it. Let me know how you get on.

Rate your responses on a scale of 1 (completely disagree) to 7 (strongly agree) and add up your score. A score of 20 or below means you're not an addict; a score of 21 to 60 means you're mildly nomophobic; and a score of 61 to 99 means you probably can't go long without checking your phone.
Go on, have a go. It just might change your life and the lives of your children.