Assad Is Bombing Children Again.....Says A Fat T-Shirt Seller In Coventry & The Media Eats It Up.

"Twenty boys and girls are among more than 100 people killed in government attack on rebel-held region" is just one of the headlines emblazoned on the front pages of UK newspapers and blogs this morning. It is being claimed today, by the unquestioning rinse and repeat British press (and international media too), that the bastard Bashar has bombed a rebel held enclave in eastern Ghouta. 100 people including twenty children are dead allegedly. The papers claim that "harrowing pictures" of dead children is evidence enough that the "regime" is slaughtering the young and the innocent. What evil bastards they are.

How do the UK's journalists know that Assad is behind the carnage? That's pretty simple. They were briefed on the attack by The Syrian Observatory For Human Rights, a very important sounding organisation which is in fact, a fat t-shirt seller in Coventry who goes by the name of Rami Abdel Rahman, a man who spent time in a Syrian jail for colluding with Syria's enemies to undermine the government. You couldn't make it up. Well, somebody did make it up. I first mentioned this guy on The RA Show back in 2014. How I laughed at the time when I discovered that Rahman was living in Coventry and spent his days writing stories on social media about the war crimes of the Assad "regime", stories including death tolls, graphic descriptions of torture and all manner of horrors inflicted on Syria's people by government forces. When he was tracked down by RT a couple of years ago, Rahman claimed "sources" from all over Syria were feeding him information all of the time. Apart from the sinister White Helmets, the first responders who in reality support an agenda to partition Syria, nobody knows who Rahman's sources are. 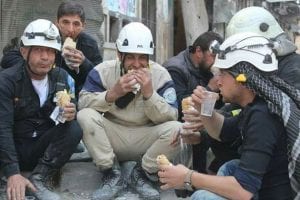 This is some laugh right? You're rubbing your eyes in disbelief aren't you? Well it's true. The international media are being briefed on a daily basis, by a man who was previously jailed for working with Syria's enemies, to bring down Bashar al-Assad. And yes he really is working out of a house in Coventry. The fact that this guy was exposed by the independent media years ago as an agent of the real architects of the mayhem in Syria and the media are STILL quoting him liberally, is all you need to know about the health of the press in this country. So is your presenter denying the story, simply dismissing it out of hand? No I am not. It is very possible that children have been killed in an airstrike, how awful if it is true. But do I believe that Assad is instructing his military to senselessly slaughter innocent people? No I do not, you could dry that old turd out and fertilise the lawn with it. Syria's autocratic government is not to blame for the dire situation it faces today. The dark actors really responsible for the chaos, the death and the mass migration need never fear exposure so long as the media gets its facts from the likes of Rami Abdel Rahman.

richieallen.co.uk
Previous Child Abuse At UK Boarding Schools Is Normal, Claims Staggering New ITV Documentary! Next YouTube Has Informed Me That It Will Soon Delete The Richie Allen Show Channel.