Beware! Your Social Media History Can Be Used To Destroy Your Life.

As a rule we don’t do sport on The Richie Allen Show, bread and circuses and all that. However, there are two stories doing the rounds of the media today, stories that are very relevant to recent discussions on The RA Show. They feature two sportsmen, the American tennis player Tennys Sandgren and the former Manchester United player Phil Neville. It should be a very good day for both men and their families. Sandgren has just reached the last eight of The Australian Open, a fantastic result for the world number 97. Phil Neville has just been appointed manager of The England Women’s football team. That’s a top job. England are ranked third in the world and it’s a great time for women’s football in the UK. It’s growing faster than any other sport. Rightly so too. I’ve watched a few games on BT this season and the standard is excellent. You smooth bastard Allen eh? No, I’m not virtue signalling. I love football. I love a good game. I don’t care whether the players are black, white, Asian, disabled, blind, male or female. 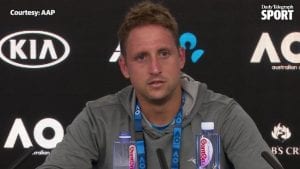 Anyway, so Sandgren and Neville have a lot to celebrate. But hold on. It seems that both men have said some stuff, it seems that both men have said some things, stuff and things deemed to be offensive. We can’t have that can we? So what did they say? Well it’s Twitter of course what else? Sandgren’s preparations for his quarter final match were dogged by questions over his political views and tweets he has posted about Hillary Clinton, Pizzagate and racism in America. He’s also been plagued by questions about who he follows on Twitter and why he re-tweeted certain videos. Sandgren described Pizzagate, a conspiracy theory linking Hillary Clinton to a paedophile ring as “sickening and the collective evidence is too much to ignore”. In an exchange with fellow tennis player James Blake, Sandgren denied that racism was systematic in the US and cited the election of Barack Obama as proof of his belief. Burn him! He’s a racist! He’s a purveyor of Fake News. How dare he have an opinion, how dare he speak his mind?!?

The Progressive snowflake Twitterati are having a field day. Sandgren is a Christian you see, so he’s been trolled to kingdom come. He’s racist, homophobic, misogynistic and all the rest of it apparently. He once Tweeted a picture of Serena Williams to criticise her bad language during a game. He used the word disgusting, referring to her profanity. That’s been taken out of context and he’s been called racist. Jesus wept. Jesus wept uncontrollably.

Phil Neville is a former footballer. He played for Manchester United and Everton. He had a great career. He applied for the job of England ladies team manager. He got it and now he’s really getting it! Former players are screaming on national radio today, that it is wrong, that a woman should have gotten the job. Maybe Phil was the best qualified candidate the FA had to work with. Just maybe. Maybe, just maybe, it is hypocritical to demand equality for women and then demand inequality for men. I don’t know if Phil was the best candidate, only the FA does of course. But, not content with caterwauling about the appointment of a man, they’ve dug up Phil’s old Tweets! Turns out Phil hates women! Turns out Phil is a misogynist. How serious are these historical tweets? You be the judge. According to The Daily Mail:

Historical tweets posted in 2012 by the former England defender saw Neville face criticism on his first day in his new job at the Football Association.

“Morning men couple of hours cricket be4 work sets me up nicely for the day,” Neville wrote. When asked why he only referred to men in his post, Neville replied: “When I said morning men I thought the women would of been busy preparing breakfast/getting kids ready/making the beds-sorry morning women!”

Burn him!! Sack him! The twitter storm has raged. Poor old Phil. This is all very amusing on the surface, but beneath the surface it is very very sinister. This is social engineering. This is all about programming millennials to understand that individual thought and freedom of expression is forbidden and that the consequences for stepping away from the herd will be devastating. Say that which we don’t like and we will destroy you. In Tennys Sandgren’s own words:

“You seek to put people in these little boxes so that you can order the world in your already assumed preconceived ideas. You strip away any individuality for the sake of demonising by way of the collective. With a handful of follows and some likes on Twitter, my fate has been sealed in your minds. To write an edgy story, to create sensationalist coverage, there are a few lengths you wouldn’t go to to mark me as the man you desperately want me to be. You would rather perpetuate propaganda machines instead of researching information from a host of angles and perspectives while being willing to learn, change, and grow. You dehumanise with pen and paper and turn neighbour against neighbour. In so doing, you may actually find you’re hastening the hell you wish to avoid, the hell we all wish to avoid.”

The young tennis star is pretty savvy eh? He’s absolutely spot on. This is tyranny in action, the shutting down of opinions, eliminating your personal freedom to say what you think, what you believe and why? That’s easy. The tyranny coming down the line will make today’s madness look like child’s play. And they will stop at nothing to destroy any dissent or opposition to it. This is what this Progressive, Cultural Marxist stampede is really all about. In the meantime, be careful. We all have to eat, we all have bills to pay. When applying for a job, keep in mind that they will trawl through your social media accounts and any harmless joke, any retweet, anything at all in fact, can and will be used against you. What a world.