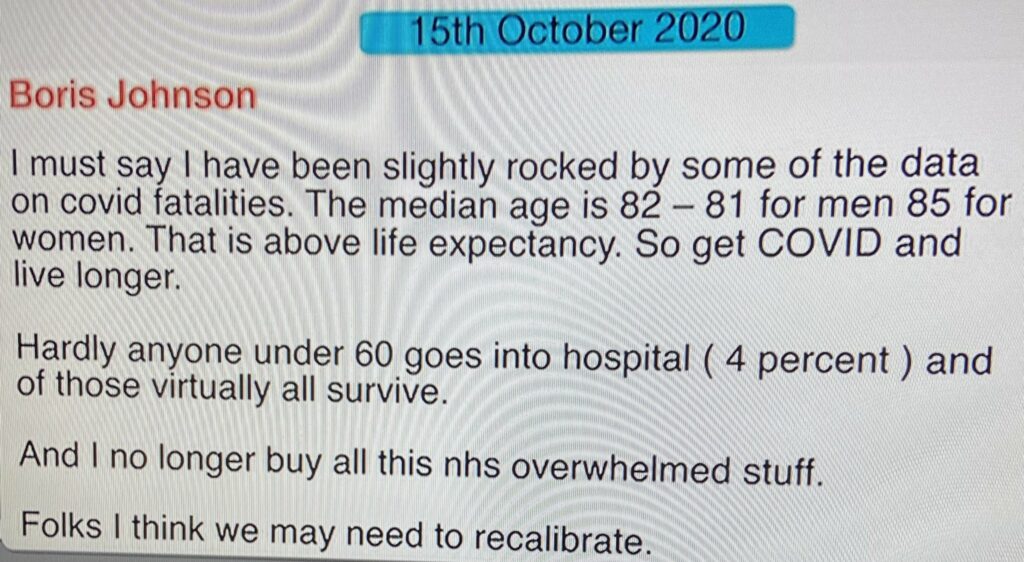 In a WhatsApp message to advisers last October, Boris Johnson made it crystal clear that he believed the threat from coronavirus was being exaggerated. He said that the average age of death from the virus was above life-expectancy and that the government should “recalibrate.”

Hardly anyone under 60 goes into hospital (4 per cent ) and of those virtually all survive. And I no longer buy all this nhs overwhelmed stuff. Folks I think we may need to recalibrate.

There are max 3 m in this country aged over 80. It shows we don’t go for nation wide lockdown.”

The WhatsApp exchanges were presented to the BBC by Dominic Cummings, Johnson’s former chief adviser. He has given an interview to BBC Political Editor Laura Kuenssberg. It will air in full on BBC Two this evening at 7pm. 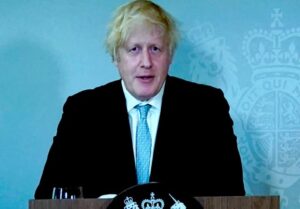 Johnson is being hammered on broadcast media today. The consensus is that he is someone who doesn’t give a damn about the elderly and was happy to let them die while everyone else carried on as if nothing was happening.

There may be some truth in the accusation. I despise Johnson. His government couldn’t give a shit about seniors. But the central premise of his message is right on.

Median life-expectancy for UK citizens is indeed 82. The average age of a covid fatality is 83. The great majority of hospital cases were senior citizens. So locking down society was tantamount to madness.

The decision to impose lockdown after lockdown has caused a real health epidemic. Nobody disputes that.

Johnson seemingly wanted to recalibrate the government’s response. Did he really? It’s hard to know what to believe these days. But if he did, who talked him down? Who’s really in charge? These are rhetorical questions. I have a fair idea. I’m guessing you do too.

I’d give my left testicle to interview Johnson. I’d give him a fair go. I would press him hard though, on the contents of his WhatsApp messages.

“Prime Minister, you knew that covid was of no real threat to the great majority of the population. You strongly believed that claims of an overwhelmed NHS were exaggerated. Why didn’t you act?”

“Why didn’t you have the courage to declare that everything would be done to give the elderly and the vulnerable the best possible chance against covid when they got it, but that everyone else should carry on as normal?

“Why mandate unnecessary, experimental and highly dangerous jabs? Are you a Nazi? Who got to you Boris? Who changed your mind and how did they do it?”

Richie Allen is the host of The Richie Allen Radio show, Europe's most listened to independent radio show and is a passionate supporter of free speech. He lives in Salford with the future Mrs Allen and their two dogs.
All Posts
5 7 votes
Article Rating
Subscribe
Login
Please login to comment
9 Comments
Inline Feedbacks
View all comments

It’s like that old optical illusion, “duck or rabbit”?

He also regretted the disaster of the first lockdown and sought to fight off the second apparently. And pointing out that destroying civil liberties and the economy was madness. Now these are his crimes, amongst others no doubt. Proof if any were needed that he is not running anything.

Last edited 11 days ago by Stubini
5

Former ethics researcher at the W.H.O., Astrid Stuckelburger, PhD, sheds light on the behind-the-scenes at our Top wlWorld Health Agency, their conflicts of interests, and WHO’S really been pulling the strings in the #Covid19 pandemic response.
https://thehighwire.com/videos/w-h-o-whistleblower-connects-the-dots/

Dominic Cummings has shown himself to be a lying untrustworthy little toad. Why is anyone listening to him now? Are TPTB trying to throw Boris under the bus? or is it some personal revenge crusade?

Tisha Bav The festival finished on Sunday night and the clubs opened a few hours later!
freedum day whilst the MP, chancellor and health minister all isolating! after a text message telling them they are possibility ill. computer says no isn’t far away.! more like it is here.

later on they changed it and said he did not mean that.

Can you explain more on the connection of “Tisha Bav The festival” and freedom day?

It does seem to me these so called “whatsapp messages” are a way of manoeuvring Johnson to one-side as the powers that be know more and more of the public are waking up. it all seems too convenient that all of a sudden now that their are more and more protests, the media, sage etc are out for Johnson and these messages are being put out their, why now? why not say last Dec etc. Or it could be that they are trying to make Johnson “one of the people” so that they are with him again rather than protesting, somethings off as normal.

Last edited 11 days ago by Patrice
14

Richie, you know as well as anyone that, even if you did get an opportunity to grill the PM, he would not be able to answer your questions honestly.
Whoever has a hold over him will be making damn sure Johnson doesn’t squeal.
Instead, he may be ‘forced’ to step down (as Hancock was) and replaced with someone else with less bad media coverage. The illusion of change without any real change.

It has been postulated that to get the peoples of the world united on the idea of a One World Government a perceived ‘alien invasion’ would do. And it probably would.
But so too would exposures like the one above, replicated through every nation.