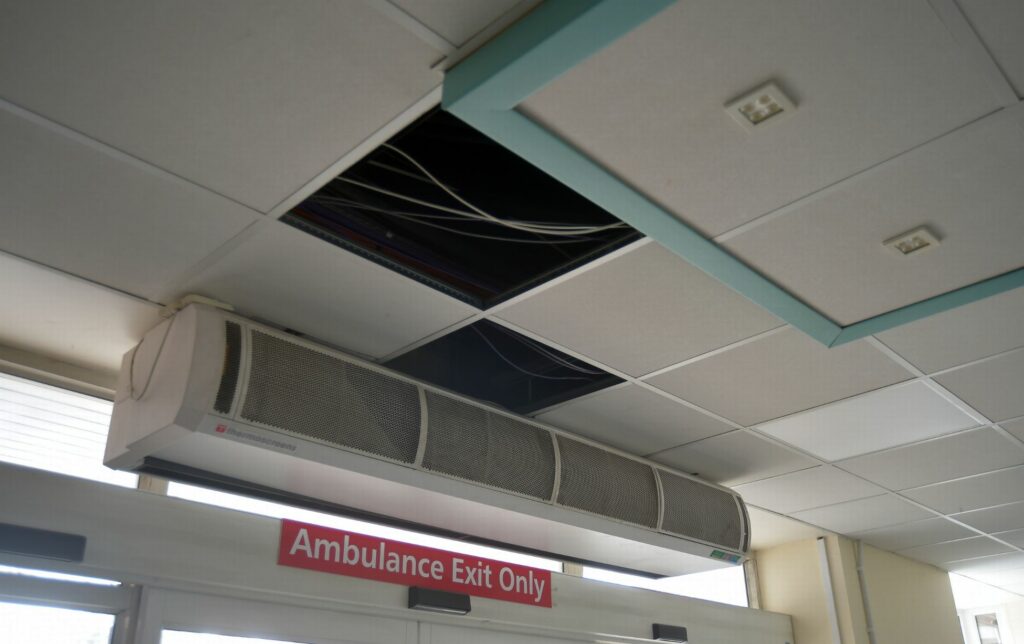 An investigation by The Times newspaper has revealed that some UK hospitals are in such a poor state of repair, patients lives are at an increased risk.

Reporters found incidents of ceiling collapses and power cuts disrupting surgeries. Some hospitals were found to have rat infestations and rooms overflowing with raw sewage.

Patients’ lives are at risk because NHS hospitals have been allowed to crumble into disrepair, with ceilings collapsing and power cuts disrupting surgery.

The number of clinical incidents linked to the failure to repair old buildings and faulty equipment has tripled in the past five years, an investigation by The Times found.

Hundreds of vital NHS operations and appointments are being cancelled as a result of outdated infrastructure, undermining attempts by doctors to tackle record waiting lists.

Recent incidents include an unconscious patient on a ventilator being trapped in a broken lift for 35 minutes and power running out as a patient lay in an operating theatre.

Freedom of information requests sent to NHS trusts in England also revealed dozens of cases of ceilings collapsing at hospitals over the past three years.
These include a “massive leak” of roof water into a unit for newborn babies, and water pouring through the ceiling on to bodies in a hospital mortuary.

Poor temperature control means some patients have had to “sleep in hats and gloves” on wards, while doctors have recorded some incidents as “a patient death waiting to happen”.

On Saturday, April 23, a five-hour power cut at the Royal London Hospital in east London led to the cancellation of operations including two lifesaving kidney transplants, and meant women giving birth had to be transferred to different maternity units in the backs of taxis.

Hospitals have also recorded hundreds of rat and pest infestations, and some rooms containing patients have been left “overflowing with raw sewage”.

Official figures highlight how the crumbling NHS estate — some of which dates back to the Victorian era — does “not meet the demands of a modern health service”.

Last year the NHS recorded 6,812 clinical service incidents related to estate and infrastructure failings, the highest figure on record and up from 2,338 in 2016-17…

..Nigel Edwards, chief executive of the Nuffield Trust health think tank, said that without urgent investment in new equipment and hospital infrastructure the waiting list for routine operations and scans, currently at 6.2 million, would continue to spiral.

He said: “Every year the maintenance backlog gets worse and the impact on safety increases. Hospitals are having to patch things up and use temporary accommodation.

Richie Allen is the host of The Richie Allen Radio show, Europe's most listened to independent radio show and is a passionate supporter of free speech. He lives in Salford with the future Mrs Allen and their two dogs.
All Posts
4.5 2 votes
Article Rating
Login
Please login to comment
10 Comments
Inline Feedbacks
View all comments

Did, Theresa May sell off the NHS buildings??? I recall her saying she was implementing the Naylor Report which included the sale of NHS Buildings. Can somebody refresh my memory, so much shite has happened since 2017, I can’t remember.
Any how, I’m not surprised by the state of the NHS, as we are Governed by Grifting scum.

£136bn spending on the NHS in 2021/22 (Source: Kings Fund) and this is what we get in return. Where is all the money going, because it’s evidently not going on the maintenance of their infrastructure!

Too many chiefs! Part of the depopulation agenda! Keep clapping!

If governments stopped stealing the national insurance maybe these places would be fit for purpose.
From what i have heard hospitals are not a place anyone should go as you may not leave.

NHS aka the (national homicide squad)

Off topic I know but I couldn’t resist sharing this. They are now giving you two hoaxes for the price of one, saves time I suppose. Climate change will be causing new viruses they claim.

Last edited 13 days ago by Jennie
3

Oh no. One hoax serving another then. And almost everyone will believe it! AND the ignorant masses will start repeating it. When we have the next virus hoax foisted on us they’ll all say ‘ Yes, but it’s climate change’.

We had friends over Sunday for dinner after 2 years. They are full swing with the msm fully jabbed. Our conversations were very heated, they think we are conspiracy theorists and climate deniers. At some points i was being told i was stupid.
I do not think we will be seeing them again. So sad. 🙁

Sadly such friends are best jettisoned where this is headed. They will only prove to be traitors to you at a later time when snitches do indeed get prizes! Consider all jabbed, especially if they got real shots, to already be the walking dead. They do not have long left.

It is sad that you can not have a different opinion and be respected for it. Even though they say they do. But to be called stupid at my age to me was disrespectful. It is sad as i know so many who have even one of my children 🙁