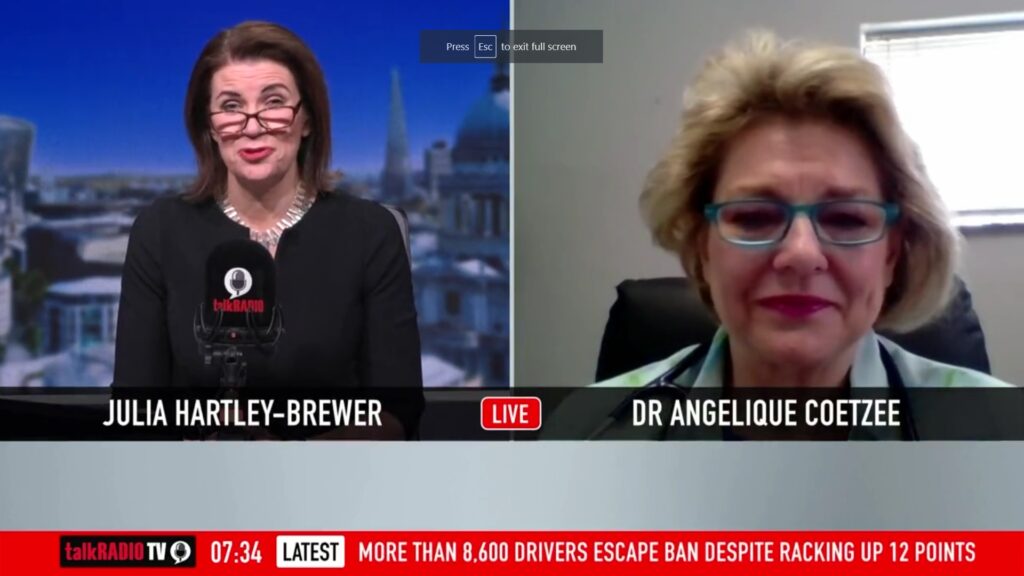 Doc Who Discovered Omicron Says: “Hype Makes No Sense At All!”

The woman credited with the discovery of the Omicron covid variant, told Talk Radio that the world is over-reacting to it. She also said that it causes no more than mild symptoms.

“Patients I’ve seen had mild symptoms and recovered. None were admitted and no oxygen was needed. The hype makes no sense to at all.”

The media is a disgrace. Health Minister Edward Argar did the rounds this morning, appearing on national radio and television. Not a single presenter asked him to justify his government’s over-reaction to the emergence of Omicron.

No, presenters instead preferred to ask him why his government isn’t going further and moving to Plan B, meaning even more restrictions and also vaccine passports.

I could strangle the bastards.

South African Dr Angelique Coetzee first raised the alarm over the Omicron variant and says the rest of the world is over-reacting.

"Patients I've seen had mild symptoms and recovered. None were admitted and no oxygen was needed. The hype makes no sense to at all."@JuliaHB1 pic.twitter.com/c14pbzveN6

Richie Allen is the host of The Richie Allen Radio show, Europe's most listened to independent radio show and is a passionate supporter of free speech. He lives in Salford with the future Mrs Allen and their two dogs.
All Posts
5 2 votes
Article Rating
Login
Please login to comment
23 Comments
Inline Feedbacks
View all comments

Best part is goverment calling to get your booster, when in theory the booster gives no protection…or why has Moderna and Pfizer announced they release an omicron compatible booster early 2022?

Also questionable, some massmedia saying symptoms for the omicron variant include heart problems of any sort, so besides creating this fear factor to reason more restriction we also cover up vaccine damage?

Lest we forget it’s winter now.
So any cough or sniffle will show up on a fake pcr as having some code of the original Wuhan leaked Fauci flu contained within, as it’s been in circulation long enough now.
So, all these fancy names and as we all know only too well, are just a rebranding of the original Fauci flu strain.

So, call them the Fauci Flus!

With regard to their potential lethality, it doesn’t matter who lives or dies from a bout of Fauci flu (as is normal and has occurred for aeons from regular good ol seasonal flu!) because all that’s needed now is the threat to sustain the “fear”.

It’s one massive global and relentless psychological operation this and they are utilising every trick in the book to maintain it, to include “plausible deniability.”

This plausible deniability is being used to make everyone think the Fauci flu scariants are doing the harm, when in fact it’s the injectable bio weapon itself that has now taken over this task, this injectable is assisting the “Agenda 21/30 Sustainable Development Goals” by way of curtailing the global population growth issues… Aka “Eugenics”.

The end game here is Digital ID, which will allow them to fully contol and “punish at will” whatever is left of the global population whenever this stage of the psychopathy ends.

There’s only one way to stop this now..

And that’s to break this cycle of fear.

I posted this link before, but it’s an excellent discussion on the financial side of ‘Ze Great Rezet’ which is why the whole psyop was triggered to begin with..

The media is dreadful and just continue to get worst over time. if only the day would be nice if everyone got together to shut the transmitters of garbage like the bbc and sky.

A case of a naive scientist seeking to make a name for herself?
After all, given everything that has happened over the last 20 monrhs, how else did she think her news would be received?

never ending circle of rebranding the cold and flu.

“The first four reported Omicron variant cases were all from patients who were “fully vaccinated.”
https://beckernews.com/here-is-what-the-mainstream-media-wont-tell-you-about-the-actual-origins-of-the-omicron-variant-43219/

So the pharmaceutical companies already stated they can change the vaccines to accommodate new variants, so that’s going to be their angle. So easy to do as the virus and various variants are computer generated nonsense. More excuse also to roll out the booster to more age ranges.
I can see regional lockdowns, the closure of hospitality and the Green Pass coming in the next month or so.
Hopefully, those that have complied up to now and been stupid enough to get jabbed will give their heads a wobble and the fog might start clearing. Though it’s more likely they will sing ‘we wish you a merry Christmas’ several times while washing their hands as their glorious leader requested.

Still trying to work out the angle here.Are the powers that be going to fear monger us into thinking the vaccines cant touch the new variant and then all of a sudden they will be declared effective against it?This will support the drive to get everybody jabbed.What a load of pish.
Maybe their slogan should be “Have an (enlarged) heart (muscle) this Christmas! Get the jabs”

Off topic but a couple of observations. A friend’s brother who lives in the US said that there are ships full of goods moored off the coast of California and the authorities are not allowing them to unload. They are deliberately creating shortages.

On Saturday when I went for a walk the sky was an absolute mass of chem trails. Someone I know who used to work in the airline industry on the technical side and still has contacts said that they are spraying heavy metals including aluminium. Can’t think of any legitimate reason for doing that.

Of course there’s a very good reason for the overreaction by the UK government and media. To continue their campaign of psychological terror against the British public and strengthen their case even further for the introduction of more lockdowns, mandatory vaccines and Covid passports.

And sadly many people will still fall for this nonsense and vent their venom and anger towards those of us who haven’t caved in and submitted to the sheep dip.

Stupid bitch should have kept her gob shut but no she has not, knowing full well the panic she would cause,i bet she is laughing her tits off behind closed doors,still its all part of the plan,this will never end .

Indian Bar Association filed murder charges against Bill Gates a week or so ago if you missed it.

Hopefully it’s the first of many.

Ya can but hope eh.

To be sung in the style of the Trumpton firemen roll call (for those that can remember!)
MU
NU
OMICRON TOO
DELTA
ALPHA
BETA
Lost it a bit at the end but you get the gist!
Someone come up with something else?

got mixed up with the magistrates court

Been in that place quite a few times over the years (not I should point out as a as defendant). It was a really depressing shithole. It didn’t survive the Tory austerity cuts and along with half the other Magistrates Courts has now been closed and sold.

good to hear it has been shut. one of the longest days of my life spent in there, innocent of course.