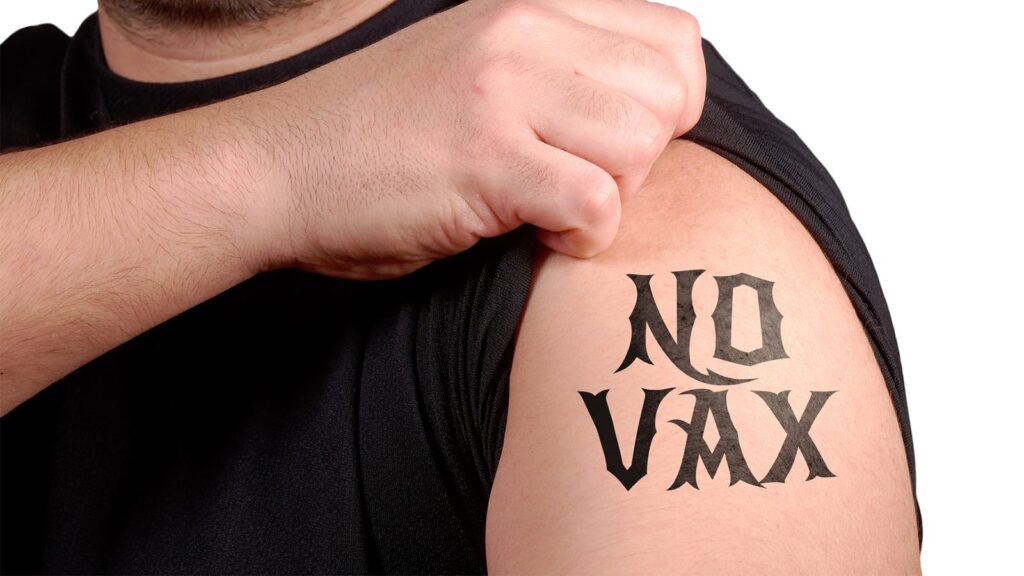 Doctor: “Less Than 20 Per Cent Of EFL Players Double-Jabbed”

Dr. Wes Tensel is the club doctor for Rochdale AFC. The club plays in League Two, the fourth tier of the English Football League. Speaking to the BBC this morning, Tensel said that potentially, less than 20 per cent of EFL players have been vaccinated against covid-19.

BBC Radio 5 Live’s Rachel Burden asked Dr. Tensel (pictured) if he had any idea as to the percentage of league players who have been double vaccinated. He replied:

“I’m not going to get into specific numbers. I do have the figures because the EFL have been auditing the players in the league so we’ve had to ask our players who’s been single-jabbed and who’s been double-jabbed. I can tell you it’s very low.”

The presenter asked him was it lower than 50 per cent? He said indeed it was. She (Burden) then asked:

“It’s low, yeah it’s quite low. Off the top of my head potentially yes.” 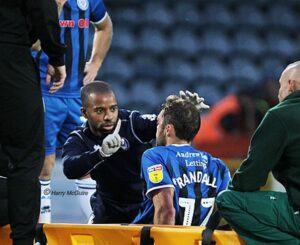 Tensel then went on to say that social media is having a big influence on players decision not to be jabbed:

“I think, one of the other reasons was social media, the anti-vax stuff that has been bandied about and that does get passed around the changing room. Football changing rooms are different to most other workplaces. The players are all together.

It’s an echo chamber, so if one of the senior players or an influential person has seen something on social media and that’s passed to someone else, they’re not likely to critically appraise where that’s come from and you can end up going down a rabbit hole.

You can spend two hours from one video to another because of the algorithms on social media. The next thing you know you believe that the Earth is flat.”

Rachel Burden then asked the doctor:

“Is there any excuse for this or are you just tearing your hair out?”

“No, I mean, everyone has free choice and to be honest if I was to get frustrated with these sorts of things all the time, I’d be very down and down in the dumps. This is their choice and I can give them the advice, the advice is out there. It’s on the NHS website. There’s only so much I can do.”

Tensel went on to say that he was there for the players if they wanted to ask him about something they’d seen on social media. He said that he would be able to provide alternative information to educate them.

Richie Allen is the host of The Richie Allen Radio show, Europe's most listened to independent radio show and is a passionate supporter of free speech. He lives in Salford with the future Mrs Allen and their two dogs.
All Posts
5 2 votes
Article Rating
Subscribe
Login
Please login to comment
29 Comments
Inline Feedbacks
View all comments

I wonder has Rachel Burden ever stopped to consider her former colleague Lisa Shaw.

Did Lisa make it to her second jab?
(But it’s confirmed that the clot shot killed her, so it’s irrelevant now!)

And how might Dr. Tensel answer that one if confronted by a senior or influential person in the locker room one also wonders??

Last edited 22 days ago by Gerry
3

“Tensel then went on to say that social media is having a big influence on players decision not to be jabbed:”

I would have thought watching Christian Erikson have his life changed had a bigger influence.

There is a mass hysteria that has gripped the medical industry (I no longer call it a preofession). it seems that almost every GP has been drowned in the Covid koolaid. Absolutely shameful!

Good for them, one way to get the message out in the msm. But i feel these player’s will start to be coerced to get the jab. Seams that anyone who goes against the narrative are punished in some way or another.

The unjabbed players at the Pittsbrurgh Steelers have to wear a yellow wristband – surpirsed it wasn’t a yellow star.

its all very sinister when you hear people say “i will educate you in a new opinion” you have free choice until I don’t like it then your opinion should change. Footballers should have amazing immune systems when you see them hugging and kissing each other after a goal.

They will be exempt when it comes to travel, quarantine etc. They are high value individuals. Elite sport must go on no matter what.

They need to retain the farce of ‘bread and circuses’.

Great news most of the players haven’t been jabbed, and succumbed to the lies and propaganda. Its a shame that the entire country cant be privy to the conversations in the changing rooms, and that they dont go online to look at alternative media. For if this was the case, thousands would not be suffering from life changing injury’s or losing there lives. As a result of an unnecessary fake vaccine, that is now poisoning the population of the planet in unprecedented numbers. As there own records now show.

Its interesting the Dr, describes his views as alternative information. Bearing in mind, he is merely peddling the same lies ,propaganda and fear, that has been the benchmark for the last 18 months.

The rabbit hole reference, though originally coming from Alice in Wonderland. Was made famous by the Matrix film. Which just happened to be on television last night. The last thing these Drs and the rest of the establishment want, is people going down the proverbial rabbit hole. For they know that if they did, just like in the film, there is a hidden world of truth lying beneath there feet. This remarkable film is a metaphor, showing how everything most people see and hear, is an illusion. Created to keep people enslaved. At no other time in history has this been so relevant as it is now.

One of my favorite quotes from the Matrix, is when Neo tries to bend a spoon with his mind. Like he has just seen a child do. The child tells him,

As no covid samples have ever been provided, no excess deaths or funerals were shown for 2020. And flue was down by 98%, to be replaced by a new virus. I think it is more than fair, to see the spoon as covid.

It is great news indeed Fox.

Nice to hear from you, how’s things?

Things are good.
Trying to prepare for another Lockdown.
How are you doing Fox.

What can i say,

Be positive as much as possible.

‘Vaccine only Covid passes or lockdown with no Christmas?’

Which do you think an 80/90% double/triple injected public will be happier with. They will embrace the ‘Freedom Pass’ (as the Australian authorities are risibly calling them) like a long lost friend.

Make no mistake, we are going to be completely marginalised within the next 3 months. Some not fortunate enough to be in a position financially to be able to refuse the injections will make it easier to marginalise us even further.

Some of the injected will initially refuse to use these passes in solidarity with the uninjected but that won’t last long, especially when the scope of the pass is widened to encompass pubs and restaurants.

From there you will have a very small percentage but a sizeable hardcore of ‘refuseniks’, and it will be how this hardcore organises itself as a force which will decide whether or not we’ll be ‘allowed’ back in general society or have to live a parallel life.

They’re going to launch something ‘big’ on that date…

Max alludes to it here:
(Watch until the end — a great music video sings out this one! 👍)

You make several good points. I agree that any proposed lockdowns will not take due to the fact that so many more people are aware of the difference between, statutes, guidelines and actual law and have their rebuttals in place.

Jake, I don’t think they’ll get away with another lockdown.

I have 0-zero idea who this ‘racial burden’ is.
So.
I looked her up and…appears to be a witch as in the older films of yesteryear’s.
R.B.’s gotta a …twisted ‘countenance’/face.
Yeah. Twisted-thoughts, twisted-face. Nature Never Lies. 😉

Yes Lord Haw Haw aka William Joyce was hanged for treason in 1946 even though he was actually a US citizen. He had obtained his British passport by deception so they gave him his full entitlement of being a British national.

He was a yank?

Yes he was a yank of Irish heritage who obtained a British passport by deception and joined Oswald Moseley’s Blackshirts. He fled to Germany just before the outbreak of WW2 and went to work in the Propaganda Ministry of Dr Geobbels. He would have been perfect for today’s BBC. He was actually hanged by Albert Pierrepoint.

Hung by Pierrepoint; who wasn’t? 🙂 He was a super busy guy and a total professional at what he did. A nice movie if you haven’t already seen it – https://cineb.net/watch-movie/watch-pierrepoint-the-last-hangman-free-494.2522851

A stooge puppet allegedly working as a “Journalist”.

And how, mein fuhrer, shall I stop destroying the comments section, please?

Are your thumbs non-opposable, ape? Scroll past! 🖕

Stay the fuck out my inbox, weirdo!!!

This website uses cookies to improve your experience while you navigate through the website. Out of these cookies, the cookies that are categorized as necessary are stored on your browser as they are essential for the working of basic functionalities of the website. We also use third-party cookies that help us analyze and understand how you use this website. These cookies will be stored in your browser only with your consent. You also have the option to opt-out of these cookies. But opting out of some of these cookies may have an effect on your browsing experience.
Necessary Always Enabled
Necessary cookies are absolutely essential for the website to function properly. This category only includes cookies that ensures basic functionalities and security features of the website. These cookies do not store any personal information.
Non-necessary
Any cookies that may not be particularly necessary for the website to function and is used specifically to collect user personal data via analytics, ads, other embedded contents are termed as non-necessary cookies. It is mandatory to procure user consent prior to running these cookies on your website.
SAVE & ACCEPT
wpDiscuz
29
0
Would love your thoughts, please comment.x
()
x
| Reply