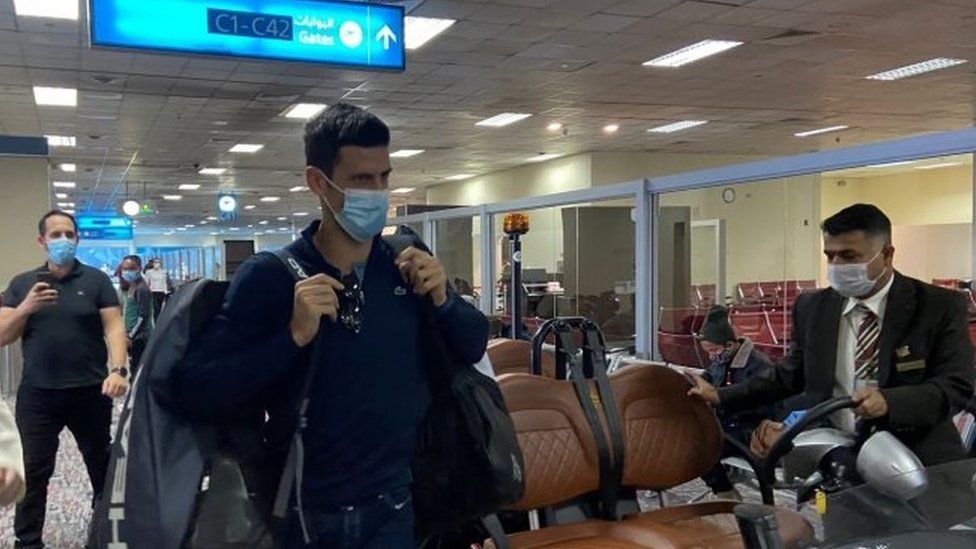 Will Novak Djokovic ever win a record-breaking 21st Grand Slam singles title? Maybe not. Djokovic is currently licking his wounds back home in Serbia after being kicked out of Australia on the eve of the Australian Open.

Yesterday, the French government announced a ban on unvaccinated athletes from competing in the country’s stadiums. Looks like we won’t be seeing Novak at Roland Garros this Spring then. As it stands, he has no chance of rocking up to Flushing Meadows to play in The US Open later this year either. No-one is getting into the US right now unless they’ve been jabbed.

What about Wimbledon? According to The Telegraph:

The UK Government position remained unchanged on Monday but the Daily Telegraph has been told that did not mean Djokovic’s Wimbledon title defence was assured.

The All England Club was said to be prepared to go further than the law required when it came to its own Covid rules – as it did last year.

A total ban on unvaccinated players in the absence of Government edict would seem unlikely but Djokovic, who arrived back home in Serbia on Monday, could yet be subject to severe restrictions during the tournament.

It’s a brave new world. Oliver Brown is The Telegraph’s Chief Sports Writer. He described the Djokovic saga as “Orwellian.” In an excellent article for the Sunday Telegraph, Brown concluded:

This sets an alarming precedent. The Australian Lawyers’ Alliance issued a statement that the deporting of Djokovic reflected less the toughness of the nation’s border laws than their arbitrariness. Greg Barnes SC, the group’s spokesman, said: “One of the most dangerous aspects of the Djokovic matter is the preparedness of the federal government to deem someone a risk to public order simply on the basis of what it perceives that person’s views might be. This is Orwellian and it is deeply troubling in a society supposedly committed to freedom of speech and freedom of thought”.

“Orwellian” is right. For almost two years now, Australia has coined some of the cruellest policies ever concocted in the name of public health. Families have been separated indefinitely across the oceans, expatriates have been threatened with prison if they dared return to their own country, while Melbourne’s 262 days of lockdown were symbolised by the sight of a homeless woman on a park bench surrounded by eight police officers. The complication is that while these excesses provoke horror in the outside world, they are endorsed by most here. Mark McGowan, premier of Western Australia, has kept his borders slammed shut even to neighbouring states for 22 months and is feted as a hero.

It is against this backdrop that the ejection of Djokovic is greeted with mass enthusiasm. It is a cause for national jubilation that the reputation of the world’s most divisive player has been severely wounded. But so too, sadly, has that of the once-tolerant country that has kicked him out.

Richie Allen is the host of The Richie Allen Radio show, Europe's most listened to independent radio show and is a passionate supporter of free speech. He lives in Salford with the future Mrs Allen and their two dogs.
All Posts
5 4 votes
Article Rating
Login
Please login to comment
23 Comments
Inline Feedbacks
View all comments

I think this is all circus myslef. novak i think is on the side of the cabal and will probably take the jab to try and sway others

Novaxx can make a bigger stand by simply saying he will retire from the sport rather than have a jab. My sporting hero Mohammad Ali went to jail and threw his Olympic medal in the river because he stood for something. Novax can be a real hero rather than a victim. Is he really free or does he answer to his masters? They can only take away his sponsorships and stop him from breaking records but these are only possessions and trinkets in the grand scheme of things. Come on Novax have some (tennis) balls and speak out against the tyranny waged against humanity and not your individual battle. No one is Free unless we are all Free

There is much outpouring of emotion defending or condemning Djokovich, yet the bigger issue is the precedant that this has created.
The revoking of citizenship based on personal choice or opinion.
Everyone should be alarmed at that.

Instead, attention is drawn to the man. Not the implications.

Not sure if it will throw any light on the situation, but i spotted this little five minute video doing the rounds recently pertaining to crime reference number 6029679/21
[For Misconduct in public office and Gross negligent manslaughter made at Hammersmith police station on Monday the 20th of December 2021.]

It’s a good video…
& Worth sharing.

Nice to see..
One of the disciples of the “One Eyed Liar Dajjal / Antichrist?

Last edited 3 months ago by Jake
3

All I hope is that he’s innocent of this and was unaware of what the images symbolised…??

As for his wifes praise for the satanic worshipping Marina Abramovic..

What can you say about that!!!

They are in the Globaliat Gang.

Check out the latest Max Igan video Jake.
Max puts a sample of Djok’s private opinion on life & spirituality etc from a discussion he had.
Djokovic might yet prove to be an ally!

It’s shown circa 20 minutes in!

Thick as treacle…
It sure is Layla😁

Omg the blood coming out of that girls nose frightened the life out me 😢 Great video, scary as hell but really good, thanks for posting Gerry 👍

It scares me too Layla!!
Always the possibility it’s artificial, however it looks authentic and we know for certain these injections are causing clotting… (To name but one issue!!)

The rest of the video seems genuine to me and the crime number reporting is most definitely the real deal!!

Getting kicked out of the country just because the government don’t like your views on something is truly awful. I fear his career is over.

John McEnroe has sent a message of support to Novak Djokovic. He obviously believes that the Australian government cannot be serious. Nice to see him getting some support. It would have been great if the other players had refused to participate unless he was allowed to play.

Tennys Sandgren has also spoken out against the madness. He’s decided not to compete cos he’s not jabbed and he’s against tyranny. All the other players apart from Kyrgios are sitting on the fence I’ve lost a lot of respect for some of them.

who knew there were so few balls in tennis

The knowledge that he hasn’t been kicked because his visa for emption was acceptable or not but because of his stance, on maintaining personal choice which might insight radical reaction in Australia, is so damning for the Country. I gather he also happened to be very vocal against an Australian mining company who have had the sights set on mining lithium in an area of Serbia. So nothing to do with health but pure politics.

Last edited 3 months ago by Clare
10

It’s sickening isn’t it.This whole fake pandemic is about politics and control, never had anything to do with health from day one.