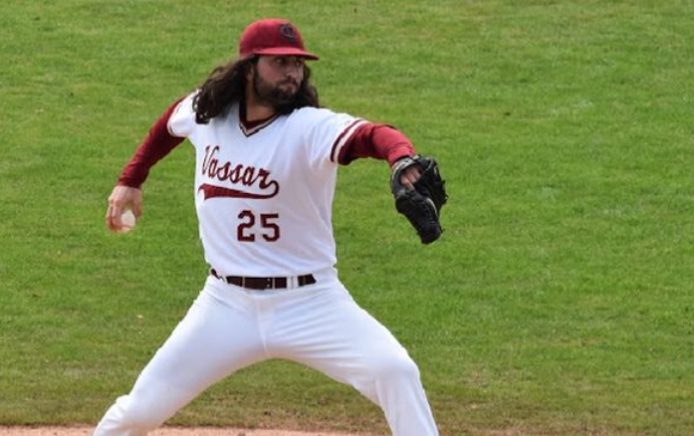 A gay minor league baseball player has hit out at players and teams who have said they will not be wearing a rainbow logo during pride month.

Bryan Ruby came out last year while playing in Oregon. He has left the sport to pursue a music career.

‘A lot of guys just don’t get that they’ve always had, and will continue to have, gay teammates. Such antiquated language and behavior actively hurts the team. It’s hard enough to be gay in baseball,’ Ruby told USA Today.

Ruby – who founded an activist group called Proud to Be in Baseball and is a ‘community advisor’ for a group attempting to bring an MLB team to the city of Nashville – added that he feels the pitchers’ decision sends a message that people like him are not welcome in baseball.

He also took issue with Adam’s use of the Bible and Jesus to form his opinion on the matter.

‘It always baffles me when guys use Jesus as their excuse to discriminate,’ Ruby said, later adding, ‘This isn’t about religion. This is about being a good teammate.

When guys go out of their way to make a point of opposing Pride Night, they’re sending a clear message that people like me just aren’t welcome in baseball.’

‘It’s a reminder that even on the one night we get to be proud of ourselves at the ballpark, we are still second-class citizens. It’s as simple as that,’ he added.

Adam, a reliever who spoke on behalf of the group, said ‘a lot of it comes down to faith, to like a faith-based decision.’ He also stressed that their decision was not the product of anti-gay discrimination, saying: ‘All are welcome and loved here.’

After last weekend’s game, Tampa Bay Rays manager Kevin Cash said that he and the organization ‘want to support our players that choose to wear or choose not to wear to the best of our capabilities.’

I can see why Ruby stopped playing and took up singing.

It must be difficult to swing a bat in anger with a massive chip on your shoulder.

He said it’s hard enough to be gay in baseball. The implication is that it’s even harder if teammates don’t wear a pride logo. What a load of bollox. He came out last September. He was roundly praised for it. Nothing changed.

And that’s the rub of it. After grabbing a few headlines and radio interviews, the limelight faded quickly. I suspect it’s all been a bit underwhelming for Ruby since then.

That’s the real issue here, not the pride logo and who chooses not to wear it.

Richie Allen is the host of The Richie Allen Radio show, Europe's most listened to independent radio show and is a passionate supporter of free speech. He lives in Salford with the future Mrs Allen and their two dogs.
All Posts
5 2 votes
Article Rating
Login
Please login to comment
10 Comments
Inline Feedbacks
View all comments

As a gay man I used to think these attitudes where ok – until probably around 5 years ago when gay surrogacy started being a thing – I vividly remember the response from a guy who with his partner was getting – and this is complicated- a white woman from South Africa to donate eggs to be fertilised ( two eggs by either male – so they could have twins ) and inserted into an Indian woman’s womb )
I asked a bit perplexed why they where using another woman’s eggs instead of the ( or another ) Indian woman’s ones – he blithely replied “ I don’t want a black baby “
I was disgusted. They where a very wealthy gay couple who could well afford to do it, it had/has less to do with ‘access’ for gays to have kids. For allot of gay men it’s been a race to the bottom shit show for a while now. It’s like where on the ‘gay merry go round’ but then you get kicked off – because your not keeping up with the ‘latest thing’ and you sit on the sidelines watching it get faster and faster and chuck more and more off – till all you’ve got left are tranz who like having sex with roller coasters and a ‘thruple’ who are into ‘dog play’ – oh and the no longer border-line grooming of kids into once adult spaces to ‘experience’ a drag show – which has more than a smattering of adult sex themes thrown in. Long and short ‘inclusive’ means ‘for them not you’ and wearing ‘the logo’ is not optional – Ruby is about to get thrown off the roundabout but has no clue. The inclusion he thinks he wants will destroy places like baseball – it’ll become a race to the bottom shit show like allot of places who have ascribed to the so called ‘gay agenda’ – I can’t believe- in 2021 there talking openly about such shit – all this ‘drag story time this ‘n that’ is killing Drag- to anyone who used to love the un-pc
adult world of drag – and it was a blast! – this is making the world more and more like a communists wet dream – which, of course is the point.

Bless him such a sensitive entitled little flower 🙄

A sobering read. LETTER TO THE LAW (richardsonpost.com)

The “shame game”, an old Communist tactic designed to incite feelings of guilt and reinforce phoney communitarianism, is being rolled out everywhere in society nowadays.

“When guys go out of their way to make a point of opposing Pride Night, they’re sending a clear message(…)”

And there it is. If we don’t actively validate their lifestyle we must, by default, be against it. Dangerous thinking.

Authoritarianism has dolled itself up to the 9s with pretty words and appearances…but underneath it’s just as ugly as ever. What an unpleasant man he must be.

That said, Ruby is just a highlighted symptom of a system that constantly encourages self promotion without encouraging humbleness.
In both the education system and the workplace the emphasis is on self appraisal, rather than objective assessments of teachers and managers.

I’m no absolutist. People in positions of authority are not perfect and they get things wrong, and self reflection certainly has a place. But, in my opinion, that place should be largely in private.

Bryan Ruby’s job is to play baseball and entertain the crowds through that sport. Period. His sexual preferences have no more bearing on that than gender identity, skin colour, religious affiliations or political persuasions should. That is how equality should work.
If he wants to promote a cause in his personal time, that’s his choice.
And if he got bullied or sacked for simply being gay, I would defend him – but I’ll not defend him for having a tantrum.

Whatever happened to ‘letting one’s Baseball doing the talking’?

These Attention seekers really do my head in, get them all in a big ring and let them fight to death

All this gay rage!! Being gay used to be a bit ‘out there’, a bit, let’s say… ‘different’. Many gay people had a reason to promote and celebrate their difference to others, or a reason to moan about being oppressed. Now that it’s clear to them that no one actually gives a flying fuck who they sleep with, some just can’t handle being classed as ‘normal’ hence all this bullshit.