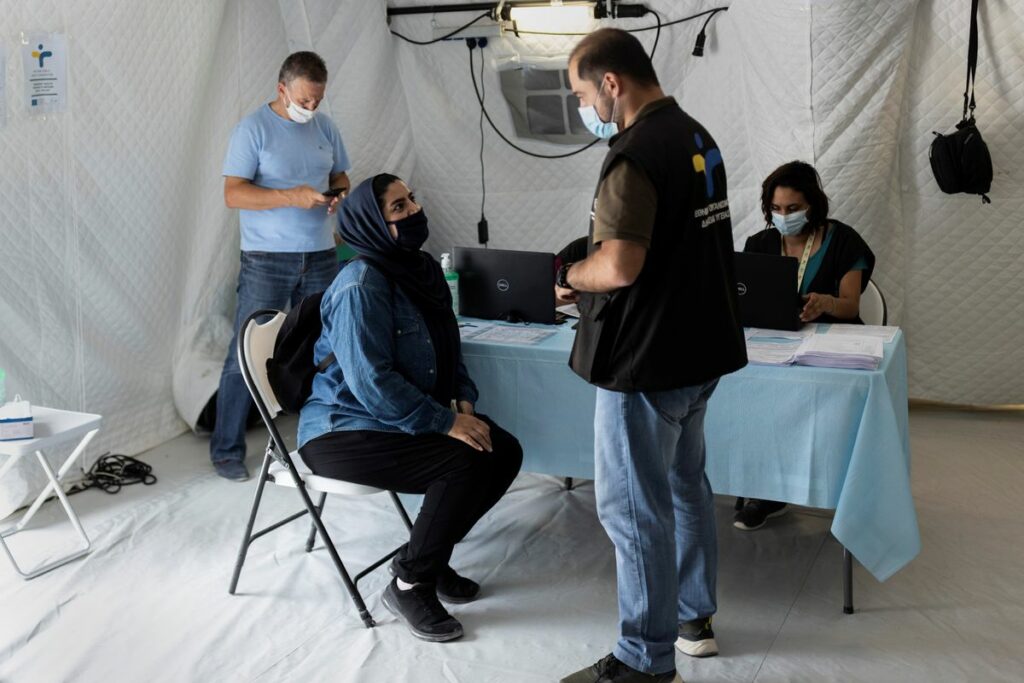 The Greek government announced this morning that covid vaccines will be compulsory for the over-60’s and that those who do not comply will be fined.

Greece said on Tuesday it would make COVID-19 vaccinations mandatory for people aged 60 and over, a drastic step for the country grappling with a new surge in coronavirus cases. Authorities said they would impose a 100 euro ($114) fine on every individual over the age of 60 who was not vaccinated.

The measure would apply each month from Jan. 16 onwards.

Kyriakos Mitsotakis, the Greek Prime Minister, said he struggled with the decision, but it was necessary to protect more than half a million elderly Greeks who had failed to get the jab.

“Its the price to pay for health,” he said.

About 63% of Greece’s around 11 million population is fully vaccinated. While vaccine appointments have picked up in recent weeks, health ministry data shows there are 520,000 people over the age of 60 who have failed to get a jab.

The hits just keep on coming.

Richie Allen is the host of The Richie Allen Radio show, Europe's most listened to independent radio show and is a passionate supporter of free speech. He lives in Salford with the future Mrs Allen and their two dogs.
All Posts
5 1 vote
Article Rating
Subscribe
Login
Please login to comment
22 Comments
Inline Feedbacks
View all comments 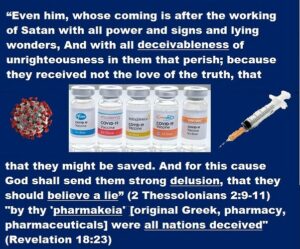 As the prison cell doors slam shut one after the other, our options are rapidly running out.

I don’t mean to be defeatist, but I’ve met so many decent well educated people who have fallen for the COVID scam. I can’t help but think things have to get a lot worse before people will wake up and take action so things can start to get better.

We aren’t losing because the NWO is smarter, we are losing because our faith teaches, we are about love of humanity and therefore we have a moral bar which prevents us from stooping to the levels of our evil overlords.

A war consists of many battles, and if the satanic NWO wins the first few rounds that does not guarantee they will win the war. In the Christian and Muslim scriptures we have been forewarned of the epic battles of the end times.

Satan played the long game in the west, he slowly took people away from their faith. It{s reached the point now where you can display a crucifix in a jar of urine and call it art and it is defended under the banner of freedom of expression. At the same time some Christians are denied the right to wear a crucifix around their neck….

Take a breather folks, and watch this. WEAPONIZATION OF CORONAVIRUS: WHEN NATURE IS CONSCRIPTED TO HARM – Hope For Our Times

This might wake a few more people to the big picture idea. It’s Begun! | Tom Hughes and Billy Crone – Hope For Our Times

Hi Patrice, please share this site with others; hope to reach 5 million by Christmas. launched last Friday. it doesn’t matter if you are not in Australia, sign up for resources to help support others with kids. I’ll also place this on to the main forum alongside Richie’s other stories and also personally email Richie . Thanks, Parents With Questions | Australians Say No

Mandates means nothing its not legal wake up Greece

doing the same in Germany and Austria

Wish more people would read about vaccine and its history, more people who question is what we need to say united no.

Once you watched or read a bit about the last 100+ years of vaccine and who pushed and funded it more would open their eyes.

Or read what a fraud Pasteur was, rigged the numbers on his experiments, and even cheated on his first human inoculation “The private science of louis pasteur” can read it on archive org

Or read later on how Rockefeller Funded the Flexner report in 1910, older brother Abraham wrote that report while the younger Simon became first director of Rockefeller research institute… the report was about to get everyone in line for the vaccine narrative:

“Between 1910 and 1935, more than half of all American medical schools merged or closed.” you can just guess it was because “…any approach to medicine that did not advocate the use of treatments such as vaccines to prevent and cure illness as tantamount to quackery and charlatanism. ”
“A few schools resisted for a time, but eventually most complied with the Report or shut their doors.” So here we are, all education, universities and medical schools are inline with Rockefeller vaccine narrative, so sure nearly no medical worker starts to question, they are heavily conditioned.
https://en.wikipedia.org/wiki/Flexner_Report

And exactly that Rockefeller research institute directed by Flexner was it who injected experimental vaccine into soldiers 1918 at Fort Riley/Kansas and caused the wrongfully named “spanish flu”.

Like these 2 small examples you can add alot reading the backgrounds of every vaccine and epidemics, like polio smallpox avian flu etc, all very questionable often only cover up.

Cases, cases, cases. Medically cases don’t mean anything except they’ve done a lot of testing with a test which is not a test and can’t look for anything specific. No more testing, no more pandemic, simple as that.

So depressing. I’ll take the fine and pay them £1 a month. They did this in the UK over 100 years ago – was in the book Dissolving Illusions. The rich could pay the fines easily so was a none issue but the poor went to prison.

This Tyrannical medical fascism is now reaching new depths of Tyranny, as yet another country falls inline with the next stage of the global plan. If people are lucky enough to survive this vile concoction. { I use the term lucky in its broadest sense, as not one will be left unmutilated.] This will not be the end, but only the beginning of the end. The intention being that these Jabs are intended to be permanent and continuous. Any one not complying, or strong enough to be able to stop being medically raped, like is now taking place in Greece and other country’s, will find themselves ostracized from society. Unable to do anything that others are able to do, without there up to date poison pass.

The above short film, shows in clear detail how vaccine passports are the start of the social credit system that we see in China. Whilst people blindly walk into the abys, they are being sucked into a system of total enslavement and control. These passes will be able to track our every movement, every purchase, every contact with others, every habit, every action that we take. Only those that are the most obedient slaves, will be given various treats for being good citizens. Whether the masses gratefully except these poison passes, or say enough is enough, is the pivotal moment that freedom either lives or dies.

Meanwhile whilst those of us that can see the truth try to warn others. As we continue to resist the best we are able this attempt to inject us with poison. As we fight to stay alive, and remain free human beings.

Morons like this man in Sweden, are lining up in shopping centers crying out, ‘Lets have some more of that please master.’ I guess those of us, that spoke of wanting to microchip people, were not just crazy conspiracy theorists after all then. As people are now being microchipped with vaccine passports in Sweden.

‘ He also forced everyone, small or great, rich or poor, free and slave, to receive a mark on his right hand or on his forehead, so that no one could buy or sell unless he had the mark, which is the name of the beast or the number of his name.’

I dont believe in coincidences, nor do i believe as some do that our futures are set. But that these prophesies, like the prophecy’s of Nostradamus were meant as a warning. But the time is rapidly running out to reverse this course of events, and the grinning idiots like the man in this video is hastening our fall into the darkness.

Coming soon to a WEF hub near you.

Aha!!
And so the Greek government are monetising it too!!

And for their pensioners no less!! (Well , close enough!!)

A nice little earner for the Christmas out of holiday season!!

and what happens if 520,000 refuse to take the jab or pay the fine? I cannot see all these people being locked up.

if they do not pay the fines their pensions will be stolen.

I’m sure the removal of pensions was already in the machinations years ago. I for one have always expected there to be nothing in the pot when I reach retirement age – not that I’ll ever afford to retire

This website uses cookies to improve your experience while you navigate through the website. Out of these cookies, the cookies that are categorized as necessary are stored on your browser as they are essential for the working of basic functionalities of the website. We also use third-party cookies that help us analyze and understand how you use this website. These cookies will be stored in your browser only with your consent. You also have the option to opt-out of these cookies. But opting out of some of these cookies may have an effect on your browsing experience.
Necessary Always Enabled
Necessary cookies are absolutely essential for the website to function properly. This category only includes cookies that ensures basic functionalities and security features of the website. These cookies do not store any personal information.
Non-necessary
Any cookies that may not be particularly necessary for the website to function and is used specifically to collect user personal data via analytics, ads, other embedded contents are termed as non-necessary cookies. It is mandatory to procure user consent prior to running these cookies on your website.
SAVE & ACCEPT
wpDiscuz
22
0
Would love your thoughts, please comment.x
()
x
| Reply