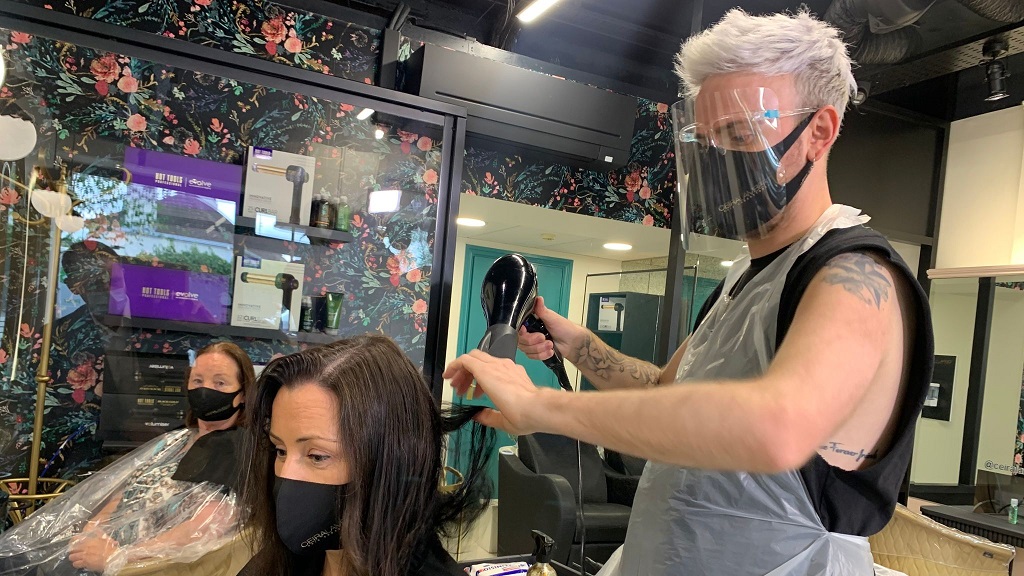 The government has told hairdressers and beauty salons to keep it simple when they reopen next week.  Guidance published on the Government’s website says hair and beauty salons “should consider providing shorter, more basic treatments to keep the time to a minimum.”

Brits who want to book lengthy procedures like extensions or highlights, might be out of luck. The guidance also says that when doing longer procedures such as braiding or massages, workers should consider how to minimise the length of the appointment.

Businesses that are on life-support desperately need to get punters back int the door. Before they open, they are being hamstrung by an out of control government. This really is tyranny. 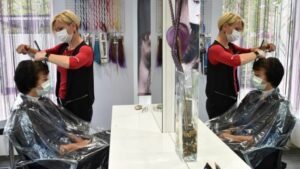 Around 5,000 hair and beauty businesses have already closed, and the British Beauty Council estimates the industry will shrink by around 20 per cent as a result of lockdown.

When salons open on Monday, staff must wear PPE, including a visor. Customers must wear a face mask when they are sitting in waiting rooms. The guidance says salons should operate an appointment-only system to avoid a build-up of  customers in waiting areas.

Music must be kept at a low volume to avoid customers having to raise their voices and risk spreading the virus through droplets. Visitors must register their details with NHS Test and Trace on arrival.

Imperial College London runs the REACT study, which measures covid levels in society. Yesterday, it announced that 1 in 500 people in England has the virus. That equates to 0.2 per cent of the population.

There is no pandemic. There never was a pandemic. Surely even the most obtuse among us, can now see that this is not about a virus?

Richie Allen is the host of The Richie Allen Radio show, Europe's most listened to independent radio show and is a passionate supporter of free speech. He lives in Salford with the future Mrs Allen and their two dogs.
All Posts
5 3 votes
Article Rating
Subscribe
Login
Please login to comment
15 Comments
Inline Feedbacks
View all comments

Greg’s has been asked to reduce fat content;
The NHS has been asked to save lives;
Taxi drivers asked to make journeys on foot;
BBC asked to report news;
Newspapers to employ journalists;
SKY news to make 6-7pm the daily TRUTH hour;
The vampiric Royals to stop drinking the nations blood;
Ministers to begin to reduce paedophilic activity with a view to ending it within 2 years;
Royals asked to publicly denounce incest;
Kate Garraway and ITV to let her husband die with dignity.

The lunatics have taken over the asylum. Fun boy three.

Had no problem getting a Haircut during “Lock up”.
Just rang someone and arranged a time thankfully.

SERCO is owned by CCS, the Crown Corporation Services. CCS is owned by the Crown Estate, which is the Monarchy. Corona means crown. The Monarchy also owns Qinetiq,
the military wing of SERCO. The Privy Council have shares in QinetiQ.
https://www.qinetiq.com/en/

I expected more from you like as real journalist

You dont like me talking about the crown corporation and serco ?

SERCO is owned by , the Crown Corporation Services. CCS is owned by the Crown Estate, which is the Monarchy. The Monarchy also owns Qinetiq, the military wing of SERCO.
https://www.qinetiq.com/en/

SERCO owns all the immigration holding centres in England, New Zealand and Australia. SERCO runs Yarl’s Wood Immigration Removal Centre where staff were abusing immigrants and using immigrants in a prostitution ring. SERCO is linked to human trafficking.
SERCO owns all the high-speed boats to pick up all the immigrants at sea.
SERCO has been linked to using boats to bring drugs to the U.K. borders.
SERCO is the largest operators of private
prisons all across the UK and Australia.
SERCO runs all the ankletagging for prisoners in England. SERCO was involved in a scandal for charging the government for dead prisoners.
SERCO runs the infrastructure for the track and trace system and the enforcement of £10,000 fines for not self-isolating. SERCO covers waste disposal all across the U.K.
SERCO owns half of London’s traffic lights and also in Dublin.
SERCO issues driving licenses to residents in Ontario, Canada.
SERCO run the trains and ferries in Australia and
all across the UK.
SERCO has a presence in all the military bases in Australia. SERCO is contracted to run the federal emergency management agency FEMA in 17 states in the USA.
SERCO runs the U.S. patent Office, they issue every patent in America.
SERCO runs air traffic control across the whole world. Public transport in the West and the Middle East is dominated by SERCO.
SERCO run, own and
maintain APR Cameras and facial recognition cameras all across the UK.
SERCO is contracted to the DWP to run their call centres. SERCO was contracted to run every single school in Bradford from 2001 to 2011, and during that time school girls were groomed into prostitution.
SERCO also runs the infrastructure for the child protection services for vulnerable children.
SERCO runs the UK
ballistic system and nuclear weapons.
SERCO also make land mines that they ship to Africa. SERCO run 3 naval bases in the U.K.
SERCO bring in ashes (illegal drugs) to the UK on their Navel Ships.
The entire blood bank is run by Serco.
In the 1980s Serco was involved in taking blood from American prisoners and selling it to the NHS where haemophiliac patients were infected with HIV contaminated blood.
SERCO runs SKYNET, the satellite system.

SERCO is owned by CCS, the Crown Corporation Services. CCS is owned by the Crown Estate, which is the Monarchy. Corona means crown. The Monarchy also owns Qinetiq,
the military wing of SERCO. The Privy Council have shares in QinetiQ.
https://www.qinetiq.com/en/

‘guidance’ it only ‘suggestions’ like what hypnotics do
never the less i have been out recently and everyone looks like they been getting their hair cut from some else and good on them.

so this is usual media madness they do before opening up as like before and all the other time.

Last edited 7 months ago by ame
5

Well my hair has looked liked a bird’s nest for months now as I’ve not been able to get it done but I’ve noticed that this has not been the case with politicians, celebrities and people in the media. This is excepting Boris Johnson of course but his hair always looks like that, mine doesn’t. As with staying in hotels and travel it seems there is one law for them and another for the rest of us.

“…risk spreading the virus through droplet…”

”…Surely even the most obtuse among us, can now see that this is not about a virus?…”

nope, until this perception of the imaginary “virus” exists, they would live in fear and go along with the whole nine yards