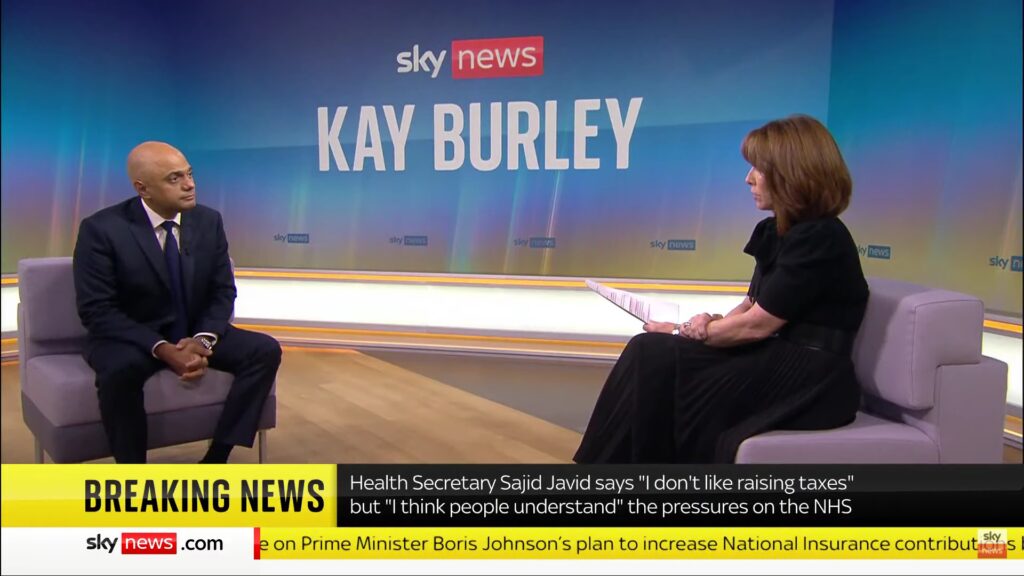 The UK Health Secretary Sajid Javid said this morning that if children and parents differ when it comes to the child receiving a covid jab, the child will prevail if he or she is deemed to be competent.

“If there is a difference of opinion between the child and the parent then we have specialists that work in this area, the schools vaccination service. They would usually literally sit down with the parent and the child, and try to reach some kind of consensus.

If ultimately that doesn’t work, as along as we believe that the child is competent enough to make this decision then the child will prevail.”

Burley didn’t bat an eyelid. Her response was to ask him about rumours that the government is preparing a potential “firebreak” lockdown for October.

Javid said that “no-one knows the future pathway of the virus.” Burley went on to tell him that in her opinion he “is doing an incredible job.”

Parents, I said it yesterday and I am saying it again today. Seek legal advice immediately. As I reported on these pages yesterday, Oxford Family Law Professor Lucinda Ferguson was unequivocal in her statement to the Telegraph on parental rights around child vaccination. She said:

“At least at this early stage (clinicians) would be reluctant to accept that that consent [from a child] is good enough because of course if you treat a child without informed consent, either from them, or from a parent with parental responsibility, it’s technically battery and that would be what would be concerning the clinician.”

Richie Allen is the host of The Richie Allen Radio show, Europe's most listened to independent radio show and is a passionate supporter of free speech. He lives in Salford with the future Mrs Allen and their two dogs.
All Posts
5 1 vote
Article Rating
Subscribe
Login
Please login to comment
25 Comments
Inline Feedbacks
View all comments

Last edited 13 days ago by tqrzvnk
0

The Cnuts know that the worse thing that will happen is ending up on the back benches still on their salaries and then when the public have forgotten they will reappear in a different role.
Pritti “Ugly” Patel is an example of this.

They know of the damage already in children caused by these death shots, yet still they push the narrative, basteeds. 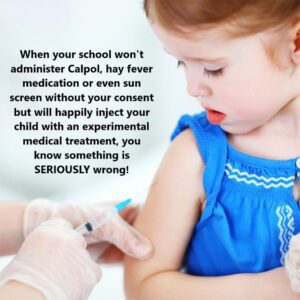 Javid “is doing an incredible job.”
Despite the cringe-worthiness of this, I think you have to admire Kay’s ability to maintain clarity of speech with her mouth full.

I would pay good money to give savage jabid a jab.

one thing i noted in the last say 10 yrs, techically children I.e.say from 13 have been referred to as “young adults” legally either your an adult or your not, if your not then your a child.

Last edited 17 days ago by Patrice
4

I’m still shaking my head in disbelief Jennie . But sadly it proves my point. Those in power can do literally anything they want. The only thing that can stop them is not the courts, but the weight of numbers not complying making things unworkable. But the numbers just aren’t there. Its all very well, people saying ,no one can make you take this jab. But the case you mentioned is just one of many, which shows it is not true. There was a video I think in Canada, but may have been the States. Of a care home, where a resident who had run away, was held down screaming. And was filmed in an alleyway outside the home being forcibly jabbed. Whilst a policeman looked on, with others. And when it was done, they all clapped. So to say people can not be made to do things against there will, is simply ludicrousness.

Just one more thing I forgot to say. If you told this story to many people. They would just say, yes its sad, but there is an emergency situation. And governments use this to justify everything. The two phrases that cover all sins are ” Public health emergency” and “Its in the public interest”. Two years ago, people would have said detaining whole populations in there homes without trial, and forcing them by law to put masks on there faces was illegal but it didn’t stop it happening.

Does anyone notice most of new gate keepers and Asian descendants.

All Cnuts with the same mindset no matter what decent they are from.

Because most people have been indoctrinated into wokeness, so they’re more likely to believe something from a ‘diverse’ person or ‘minority’ to show how morally ‘woke’ they are.

Plus they know that a lot of BAME will not take the “Experimental Gene Therapy.” Who better to promote the poison than those from your own “community”.

(Latest Update, down load the pdf version of the transcript or the podcast before it is deleted.)
We’re now seeing reports of herpes and shingles infection following COVID-19 injection, and this is precisely what you can expect if your Type I interferon pathway is disabled. That’s not the end of your potential troubles, however, as these coinfections could accelerate other diseases as well.
https://articles.mercola.com/sites/articles/archive/2021/09/07/long-term-covid-vaccine-dangers.aspx

In the UK, If a young person under 16 years consents to sex, it is classed as statutory rape. As the consent is not excepted in law. It is also called statutory rape, if a person of any age, can prove they consented but were coerced. Therefore should not anyone including children, be classed as having been medically raped, if the above applies to them.? I believe it should.

But how many parents in reality will object to there children being jabbed.?. It will not be many. Most of them have happily been having there children vaccinated for years. Despite the evidence of harm with traditional vaccinations. For example there are countless links to autism which most ignore.

The problem started long before 2020.It is what I used to call ” the politics of complacency”. The general public ,have been indoctrinated over many years, to believe authority and to believe in the system. Which is why it was so easy for them to get away with what they did in March last year, in striping everyone of there basic freedoms, under the guise of a public health emergency. The problem all along is how to break this belief. This belief that has aloud the increasing tyranny over the last 18 months.

This indoctrination starts in the schools at a young age. So unfortunately, many children will be only to happy to except this dangerous poison into there body’s. So where does that leave the handful of parents who can see the truth and object.? I suppose the only option is the legal rout. Though as I have stated many times, I have little faith in the outcome of that. And laws can be changed at any time where they think necessary. I don’t have any children, but I feel for any parents who can see the truth. Having the responsibility of protecting there children ,in the world we now live. In a world where schools are no longer places of learning, but have long been indoctrination centers and now “medical centers.”

Once again it comes down to numbers. If enough parents said no. And if these parents got enough support. Then these monsters would not be able to enforce there will. But it will not be because of the legal system. It will be because, the weight of support and resistance disrupts the system. Making enforcement impossible.

Everything we have been told over the last 18 months is a lie. The only way to end all of this, is non compliance in large enough numbers.

Well said Fox, I am a parent to 3 kids, one in High School, a special needs School and a nursery and so far I have written to each School & the nursery to make clear I do not consent to these covid19 jabs and they have all written back stating that they would not be able to administer these jabs, let alone any kind of medical intervention without full parental consent, but it’s not enough as it’s not the staff in the Schools as such I don’t trust, it’s what’s calling the shots above them, the whole system. In the case of my younger ones, I would either take them right out of the Schools/nursery if they go ahead with this evil of jabbing children or look into legal advice like Richie suggests, I know there is a lot of parents against this, especially at the Special needs School ( a lot of Teachers as well) but the high School parents are mostly all going along with it, it’s soul destroying 🙁

Maybe you and the other concerned parents can get together to pay for a lawyer to draw up a contract for the head of the school to sign stating that no children will be jabbed without parental consent, and if they refuse then it’s obvious what’s going on. Maybe a silly idea as I’m not a parent and not familiar with the law.

Not at all Bobby, it’s definitely something to look into further, thank you x

Thanks for that, good to hear from you Layla

Thanks Fox, I always love reading your messages, you put out some fantastic info x

Where this inevitably leads is reducing the age of consent – including for sexual interaction.
It’s not as if there haven’t been plenty of signs of this in recent years.

And the reasons behind it? I would say pretty obvious. All those high level paedo rings can no longer be prosecuted.

That is an extremely astute observation. Absolutely spot on.

I find it laughable how these replaceable government puppets come out with their plans, maybe’s, maybe not’s, confirmations and denials in the lead up to something that’s been planned for months if not years. The theatre is so obvious yet the masses will drink this kool aid.

You can guarantee every major policy and action was planned way in advance, they just needed said puppets, lackies and stooges to engineer the narrative to gain public acceptance. .

This has been planned for decades.

This website uses cookies to improve your experience while you navigate through the website. Out of these cookies, the cookies that are categorized as necessary are stored on your browser as they are essential for the working of basic functionalities of the website. We also use third-party cookies that help us analyze and understand how you use this website. These cookies will be stored in your browser only with your consent. You also have the option to opt-out of these cookies. But opting out of some of these cookies may have an effect on your browsing experience.
Necessary Always Enabled
Necessary cookies are absolutely essential for the website to function properly. This category only includes cookies that ensures basic functionalities and security features of the website. These cookies do not store any personal information.
Non-necessary
Any cookies that may not be particularly necessary for the website to function and is used specifically to collect user personal data via analytics, ads, other embedded contents are termed as non-necessary cookies. It is mandatory to procure user consent prior to running these cookies on your website.
SAVE & ACCEPT
wpDiscuz
25
0
Would love your thoughts, please comment.x
()
x
| Reply