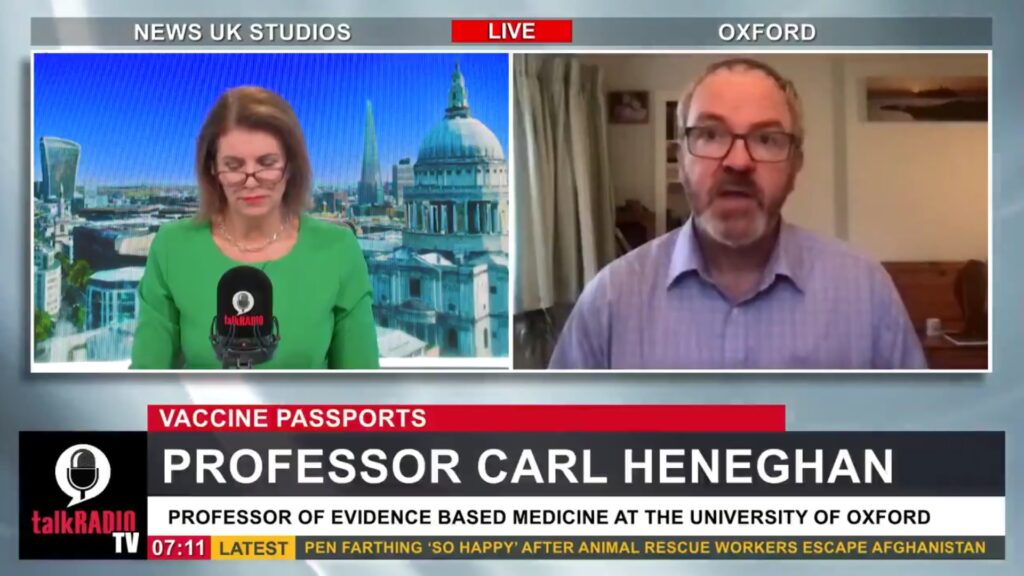 Oxford University Professor and general practitioner Carl Heneghan told Talk Radio this morning that the NHS has been in crisis 17 out of the last 20 Winters. Speaking to Julia Hartley-Brewer, Heneghan said:

“So the big problem we face as we go into the Winter is that we’ve got one of the lowest bed capacities in Europe, really quite low down, somewhere like Germany has three times as many beds as us.

So if you think we’ve only got just over 100,000 adult beds, we’ve got no flexible capacity as we go into Winter. It’s a bit like a Christmas store saying “we can’t get any jobs at Christmas and we can’t expand the number of checkouts.” We have a significant structural problem in the NHS.

We need about 20 per cent extra beds. Most of those beds could be low-tech and for the vulnerable and the elderly. But if we put 20-25 per cent of those people that take up 20-25,000 beds, suddenly the NHS is overwhelmed.

“That’s 17 out of the last 20 years that I’ve been a doctor the NHS has been in crisis in Winter. With the heightened anxiety of where we are now, it’s going to be difficult for the Prime Minister and his cabinet to not press that button to go lockdown.”

Heneghan went on to say that just as with flu, people should be trusted to take care of themselves over the Winter and decide which precautions to follow.

Richie Allen is the host of The Richie Allen Radio show, Europe's most listened to independent radio show and is a passionate supporter of free speech. He lives in Salford with the future Mrs Allen and their two dogs.
All Posts
4 4 votes
Article Rating
Subscribe
Login
Please login to comment
11 Comments
Inline Feedbacks
View all comments

The money is not for the NHS, it’s for lining the pockets of their mates with all those COVID Contracts…

When it comes to wars, bullshit, stealing money from you, or killing brown people in faraway lands, then the government will suddenly find that magic money tree. When, God forbid, it comes to help ordinary people, then, “WHERE WILL THAT MONEY COME FROM”?...

The truth about the pressure the NHS is under.

The imaginary virus patients are not now, nor were they ever the reason for the lack of hospital beds. There is no evidence of one patient ever having had covid 19. What has happened since the start of this scam, is people have gone into hospital as they always have done. Some times they have flue and other respiratory problems. They also have dozens of other illnesses, diseases, complaints, injury’s and ailments, just like they always have done.

But what happens when they get into hospital, they are given a fake test, that is not meant to be used to diagnose viruses. They are then officially classed as covid patients, when many don’t even have flue symptoms. And if they die, classed as imaginary virus deaths.

There is often a shortage of beds in hospitals, as they have been reducing them for year’s. But ironically, since the covid measures, there should have been many beds empty. And sometimes there has been. As they sent vulnerable patients into “care homes” to murder them. For many months they were hardly treating anyone for anything or carrying out any examinations. As they waited for the imaginary onslaught of the imaginary victims of the imaginary virus. Many patients are still not being treated even now. Hence the massive backlog.

In addition to this, they have been removing hospital beds to keep patients further apart. Even though hospital beds are usually at least 6 feet apart anyway. There have also been staff shortages due to staff being sent home because of the fake test. And at the” peak” of this covid con, there were casual nursing staff being given two months leave. Many have come forward and said this. They were so busy they sent staff home, never used the Nightingale hospitals, and the small staff they kept on the ward, were so busy they had time to make dance videos.

If there is a genuine shortage of beds in the months ahead, it will be because of the reasons already stated, and because of poison jab victims. Not because of covid 19, squirrel flue or pink elephant rabies.

You just summarized, perfectly, how politicians cover up their own fluckups by deflection, creating a new crises thereby inflicting more misery and hardship on their populace.

Hi Johan, where you.? I’m in a secret fox lair in London.

Spot on and they are testing terminal patients and the very elderly with their fake test (at a high level of cycles) so that when they die they can called it a covid death.

I think I might have pink elephant rabies, is it when your brain can’t take anymore bullshit and propaganda?

He he, yes could well be. I have something in my head regarding Kangaroos, i hope you will like it, but that’s for another day.

If only we had created thousands of extra, specialist beds at the start of this ‘crisis’ which now stood empty.

This is a link to an edited version of Gareth Ikes latest program. In which he interviews several parents about the poison jab. It may be of some comfort to those aware parents to know they are not alone. Also it may be useful, to post to some parents who are still in the dark.

No. The pretence of a pandemic via the coronavirus act has to be maintained otherwise the jabbing has to stop. The jabbing is only authorised under an emergency use mandate.

This is madness the NHS wastes so much money and as for those running it most are not fit for purpose. Put a few ex business people who have something about them in charge, instead of the old school mates syndrome and we might get some sort of a descent organisation.

Interesting article regarding the NHS https://nhsfunding.info/nhs-crisis-making/#