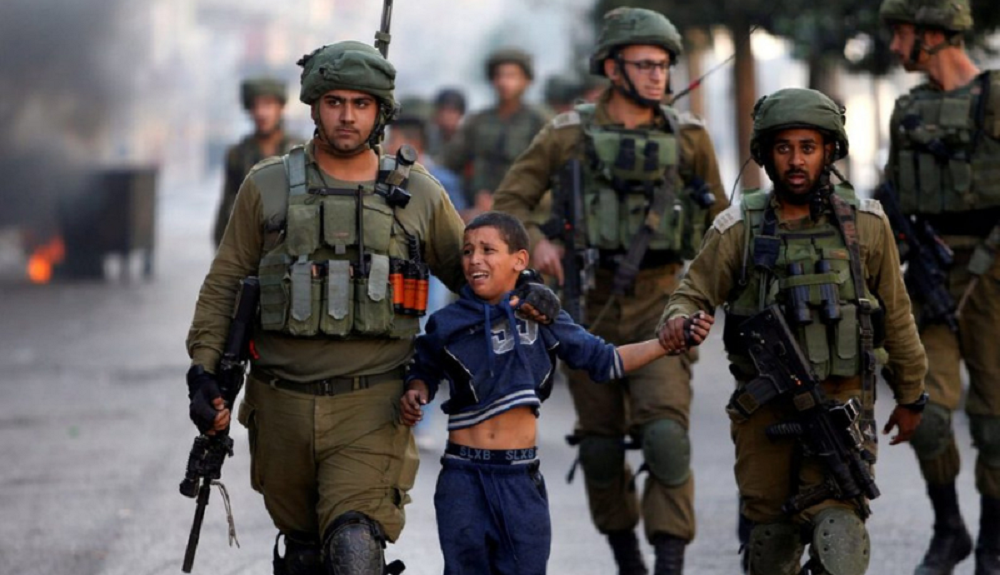 Human Rights Watch (HRW) has today accused Israel of pursuing policies of apartheid and persecution against the Palestinians, that amount to crimes against humanity.

In a 213 page report, the organisation said its aim wasn’t to compare Israel with apartheid-era South Africa, but to assess “whether specific acts and policies” constitute apartheid as defined under international law.

The Israeli government has rejected the report, labelling it “preposterous” and “false.” Israel’s foreign ministry accused Human Rights Watch of having a longstanding anti-Israel agenda.

In the report itself, HRW used the example of illegal Jewish settlements in Palestinian territory and restrictions on the movement of Palestinians, as examples of persecution and apartheid. 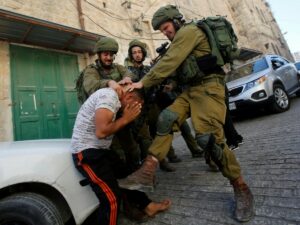 Across Israel and the (Palestinian territories), Israeli authorities have pursued an intent to maintain domination over Palestinians by exercising control over land and demographics for the benefit of Jewish Israelis.

On this basis, the report concludes that Israeli officials have committed the crimes against humanity of apartheid and persecution, as defined under the 1973 Apartheid Convention and the 1998 Rome Statute.

“The purpose of this spurious report is in no way related to human rights, but to an ongoing attempt by HRW to undermine the State of Israel’s right to exist as the nation state of the Jewish people.”

Israel is a racist, apartheid and illegitimate state. Of course it has no “right” to exist. Israel’s only claim to legitimacy is based on a passage in the bible. God is said to have promised Abraham;

“…unto thy seed have I given this land, from the river of Egypt unto the great river, the Euphrates.”

“This country exists as the accomplishment of a promise made by God Himself. It would be absurd to call its legitimacy into account.”

Call me absurd then.

The treaties that led to the UN resolution on the partition of Palestine in 1947, are just as dubious as the biblical promise. The Sykes-Picot agreement, signed by Britain and France in 1916 and the following years Balfour Declaration, were both illegal under international law.

Neither Britain nor France had any legal stake in the future of Palestine. But ultimately that didn’t matter. 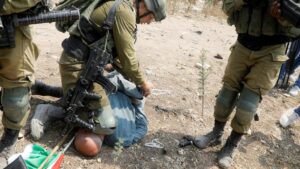 Gaza has been described as the biggest open-air prison in the world.

The UN has passed thousands of resolutions denouncing Israel’s crimes, but no action is ever taken. If I had my way, Israel would be sanctioned back to the stone age. As Amnesty International reported last year:

Israeli forces continued to use excessive force during law enforcement activities in Israel and the OPT. Israeli forces killed 31 Palestinians, including nine children, in the OPT; many were unlawfully killed while posing no imminent threat to life. Israel maintained its illegal blockade on the Gaza Strip, subjecting its residents to collective punishment and deepening the humanitarian crisis there.

It also continued to restrict freedom of movement of Palestinians in the OPT through checkpoints and roadblocks. The Israeli authorities arbitrarily detained in Israel thousands of Palestinians from the OPT, holding hundreds in administrative detention without charge or trial. Torture and other ill-treatment of detainees, including children, were committed with impunity.

The authorities used a range of measures to target human rights defenders, journalists and others who criticized Israel’s continuing occupation of the West Bank, Gaza Strip and Syrian Golan Heights. Violence against women persisted, especially against Palestinian citizens of Israel. The authorities denied asylum-seekers access to a fair or prompt refugee status determination process. Conscientious objectors to military service were imprisoned.

Richie Allen is the host of The Richie Allen Radio show, Europe's most listened to independent radio show and is a passionate supporter of free speech. He lives in Salford with the future Mrs Allen and their two dogs.
All Posts
5 2 votes
Article Rating
Subscribe
Login
Please login to comment
18 Comments
Inline Feedbacks
View all comments

Rampaging Israeli Settlers
Calls for “Death to Arabs” in Jerusalem.
Last week there were some interesting stories that were very definitely underreported partly due to the fact that the mainstream media was heavily into the distraction provided by its beatification of George Floyd. For example, the tale of how a mob consisting of hundreds of Israeli Jews, composed mostly of settlers and the extremist so-called Kahanists, rampaging through Jerusalem and calling for “Death to Arabs,” was largely ignored. Right-wing Israeli lawmaker Itamar Ben-Gvir sent a message to the settlers, encouraging participants to “hang Arabs.” One member responded to the advice to bring their firearms with them with “We’re burning Arabs today, the Molotov cocktails are already in the trunk.”

In spite of the extreme violence and racism behind the attacks, the story did not seem to interest the disproportionate number of Zionists among American news editors and reporters. Along the way, the angry Jews beat Palestinians and attacked their homes and businesses in one of the Old City’s remaining Arab neighborhoods Sheikh Jarrah.

Attacks on Palestinians, to include their homes and livelihoods have been increasing in Jerusalem and on the occupied West Bank over the past several months without any intervention by Israeli police. The settlers were reportedly part of a right-wing Israeli group called Lehava which organized the violent demonstration with the objective of “restoring Jewish dignity” by “breaking the faces of Arabs.” Lehava claimed it was only avenging alleged attacks on Jews by Palestinians in and around Jerusalem, but most reports indicated that recent violence was instead caused by small groups of Jewish teenage boys looking for trouble….
https://www.unz.com/pgiraldi/rampaging-israeli-settlers/

They call themselves jews, but they are not, they are the synagoge of Satan.

I acknowledge the promise from God to Israel to give them the land of Canaan. As a Christian I also have to publicize the fact that God said he would kick them to the curb if they didn’t stop reverting back to impure worship. Jesus Christ pointed out that by rejecting him as the messiah, God likewise finally rejected them for the last time.
Israel no longer has any claim to God or the land given to them. Individually they can accept Jesus as the promised help from God like the rest of us.

Israel is not an apartheid state, it’s a fuckin’ genocidal one.

So no surprises that they’ll even turn on their own by way of forced vaccinations and tyrannical health passports.

Surely at this stage, many more Jewish Israelis can see the complete lie that the whole state has now become.

You could talk all day about it, suffice to say, this state is no role model for anything or anyone and shame on any country that might support it or follow its lead.

So upon watching it, one should consider how this type of propaganda is now being utilised to control the entire planet using a false narrative of a fake pandemic…
(And how well it works!)

This is simply a must watch…

And if you’ve already seen it…??

Watch it again and ‘go tell your friends!’

Very good film Gerry.
If someone wants to understand how deep Israelis are controlling british politics then I highly recommend watching the Al-Jazeera series of documentaries “The Lobby.”

Al Jazeera Investigations exposes how the Israel lobby penetrates the many different levels of British democracy.

Thank you for sharing, that will be my homework for tonight. I always download things straight away when I can because they have a habit of disappearing.

Israel should also be investigated for their role in organ harvesting and trafficking for the benefit of the so called elite. They use Palestinian prisoners and others, sometimes the Palestinian families get the bodies back and sometimes they don’t.

Except to the Palestinians of course!!
(And anyone else who tries stand in their way!)

And now they’ve even turned on their own with the digital ID Agenda enslavement health passport gene modification programme!!
(The irony of it!!)

Nothing surprises me with this Apartheid regime!!

Last edited 12 days ago by Gerry
1

It was an excellent film, thank you. It was good to see that the British media still had a bit of courage a few years ago but I don’t think that would be the case now on anything. The way the world is going I think we’re all going to be in a similar position to Palestinians soon.

Truer words never spoken Jennie.
Too many brainwashed sheeple unwilling and incapable of doing the necessary research to unplug themselves from the Agenda engineered delusion!

And when it comes to the finance and power to do it, these globalist psychopaths can simply manufacture it at will.

Mr Biton’s stance is clearlt that of a bisased view based largely on the fact that Israel (often by proxy) possesses a financial stranglehold on many governments. If any sector of the human race should know better than to behave in this way it is the Jews. 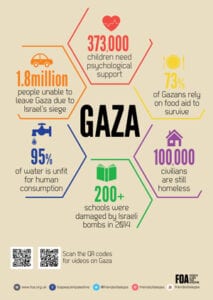 Much appreciated. This is truly disgraceful.

You are welcome.
Not sure if know about this?

According to former Chairman of the Joint Chiefs of Staff Admiral Thomas Moorer, “Those men were then betrayed and left to die by our own government.” The survivors are still awaiting justice.
https://councilforthenationalinterest.org/liberty/

Here is the documentary about the incident.
https://brandnewtube.com/watch/the-attack-on-the-uss-liberty-by-israel-amp-amp-amp-the-cover-up_jXpPmf3IVCN2Ng6.html

There are good and bad people in all sections of society. We are not our race, our religion, our sex etc, we are individuals.

A good paradigm fro us ALL to live by.

I wasn’t being funny or sarcastic I really did mean it.