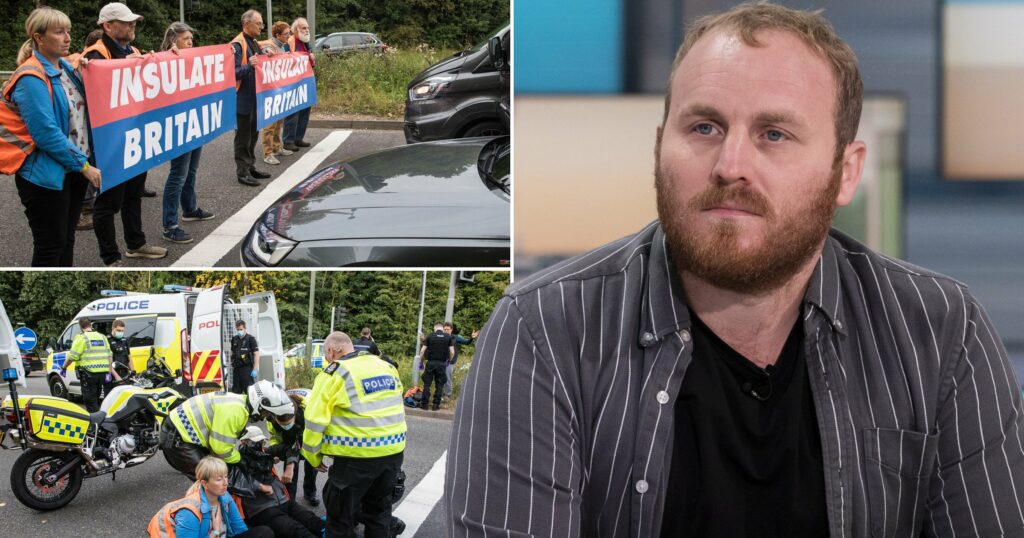 Are Liam Norton’s relatives concerned about his mental wellbeing? If not, they should be. Norton is a spokesman for Insulate Britain. He’s been a constant on UK radio and tv news in the last few weeks. He doesn’t look or sound well.

Of course, I’m not qualified to diagnose mental illness and I’m not in any way taking a cheap shot at Norton. I’ve had a good laugh at his (and his colleagues) expense on The Richie Allen Show lately, but I think someone should be looking out for him.

Every other day since the eco-campaign group Insulate Britain first blighted the lives of the nation’s motorists, Liam Norton has popped up on national media, each appearance more bizarre than the preceding one.

Insulate Britain wants the government to spend billions on a national home insulation programme so that homes won’t use as much energy in Winter. They say that if this doesn’t happen, the climate will breakdown leading to societal collapse and the deaths of hundreds of millions of people.

It’s so preposterous that even I can’t find the words to do it justice. But people like Liam Norton actually believe it. Either that, or he’s an excellent actor. I think he might be struggling with a sort of religious mania. 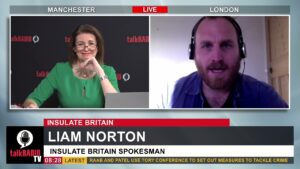 An old friend of mine lost his first wife to suicide. She suffered with something that was known as religious-mania. These days they call it hyperreligiosity. He told me how his wife was consumed by the idea that we (humans) were all terribly wicked and that the end of the world was imminent. She was frenzied and would verbally abuse random strangers and implore them to repent.

Liam Norton has been going on national television and radio and telling the presenters (and the viewers) that we are complicit in the destruction of the Earth. He says that we are playing a dangerous game and that history will remember those of us who didn’t act, as traitors. He means it.

His Extinction Rebellion pal Roger Hallam has suggested that journalists who don’t join his band of climate warriors, will probably hang. Here, I have to be blunt. I believe these people are ill. They should be sectioned and evaluated.

Sectioned, for anyone who doesn’t live in the UK, means that when a person is deemed to be suffering from mental illness, they can be involuntarily committed to a psychiatric facility to be assessed. It’s a legal process.

This isn’t going on my highlight reel. I take no pleasure in suggesting that someone is unwell and needs to be evaluated. I’m calling it as I see it.

There’s something else to consider. Children are listening to Liam Norton and Roger Hallam as they rant their apocalyptic prophesies on tv and radio. They are largely unchallenged by the interviewers. Talk Radio’s Julia Hartley-Brewer is a notable exception.

I don’t want children to hear the nonsensical ravings of men who seem to be suffering some form of hyperreligiosity. Children are terrified enough as it is.

“The injunction is just an attempt to use fear to intimidate us and it won’t work”.

Richie Allen is the host of The Richie Allen Radio show, Europe's most listened to independent radio show and is a passionate supporter of free speech. He lives in Salford with the future Mrs Allen and their two dogs.
All Posts
5 1 vote
Article Rating
Subscribe
Login
Please login to comment
20 Comments
Inline Feedbacks
View all comments

They should have started building new houses with really good insulation years ago, do agree about that. I also agree that climate change exists, although we are heading for a cooling not a warming, but it’s caused by solar cycles and there isn’t a great lot we can do about those.

Changes to the Mental Health Act in recent years makes it incredibly difficult to section people.
For the longest time, I’ve not been a fan of section orders. I’ve seen it abused too much. However, I recognise that it is necessary on occasion. The last time I was involved in a case that really did warrant a section order, myself and my colleagues couldn’t get it.

Hold on Richie, if the Mental Health Act starts getting thrown around, there’s a lot of people here including me who could catch a sectioning. Let the loonies run free.

Last edited 15 days ago by Abdel
7

I’d be locked up right next to you bud; and would be proud to be so. Alain de Botton has very famously said” in order to find commonality one must find those who are crazy in the same way as we are2. THAT is my yardstick.

That is really not a good idea. People who are sectioned have no right to refuse any medication or treatment.

I dont believe in people basically being imprisoned by a medical gestapo without having committed a crime or having been found guilty. Everyone should be tried, regardless of what the idiot psychiatrists say, if they have been arrested for a crime. Otherwise you have the brain butchers being used as a fascists’ tool of the state. Just look at the people that have been locked up, by the shrinks because they have spoken out about covid scam. Including several Drs. Another repercussion, of the sectioning system, is that people are sometimes locked up for many years who may or may not have committed murder. But again without being tried, if deemed to be incompetent. They can then be basically locked up till the day they die or released at any time. Regardless of whether they did the murders or not. Again all on the say, of a shrink.

Which makes it fascism. Locked up without trial and given brain damaging drugs.
Not justifiable, not ever.

Not just brain damaging drugs: any drugs. Someone who is sectioned will have no right to refuse the ‘vaccines’.
I don’t understand how people can’t see that, or the dangerous slope that they are advocating.

A history of climate change.
https://electroverse.net/a-history-of-climate-fraud-i/

A HISTORY OF CLIMATE FRAUD
DOCUMENTING EARTH CHANGES DURING THE NEXT GSM AND POLE SHIFT.
https://electroverse.net/a-history-of-climate-fraud-i/

If these people are getting £574 fines for being out or not wearing a mask what should Liam Norton get ?
https://www.northantstelegraph.co.uk/news/crime/the-latest-lockdown-law-breakers-in-court-from-kettering-corby-and-wellingborough-3412315

I agree with you Richie. Him and his ilk are a tin short of a six pack, and pretty much useful idiots to those steering the climate change agenda for totalitarian purposes.

Alex, I would go further than that in saying that Liam Norton looks like a media ‘construct’. This man ticks way too many ‘classic ranting looney’ boxes for my liking, even flouncing off a TV show under some (allegedly) heavy questioning from Richard Madeley – which is rather like being savage by a King Charles Spaniel. It just doesn’t smell right to me.

Your thoughts are similar to mine on this issue, Backbeat. I’ve had many dealings with mentally ill people over the years, family and patients/service users I’ve worked with – and this guy doesn’t ‘smell’ right, at all.
If he is a construct (and I concur, he would appear to be so) – I would say that his invention could serve several purposes, namely:
To agitate, gain a genuine following (ie, those who have genuine, if somewhat misguided, views around climate change), cause ‘protest-related’ problems, and therefore be used as leverage in order to change the laws around protest, freedom of expression, etc;
To facilitate the labeling of dissidents of any kind (especially those who go against the present new world order ‘narrative’) as being mentally ill, non compos-mentis, unable to make decisions regarding ‘vaccination’ and, therefore being unable to decline said ‘vaccines’. Add to this scenario the inevitable mission creep, this could be extended to fit all and any ‘my body, my choice’ related health and social issues……..

I would like to hear Liam Norton and Roger Hallam debate climate with Ian Plymer and Dr Patrick Moore. I think that would be really entertaining. They could get little Greta in on the debate too.

Greta has gone into hiding and will appear some time in the future.

What would be the point? These people are not interested in debate – only demand.