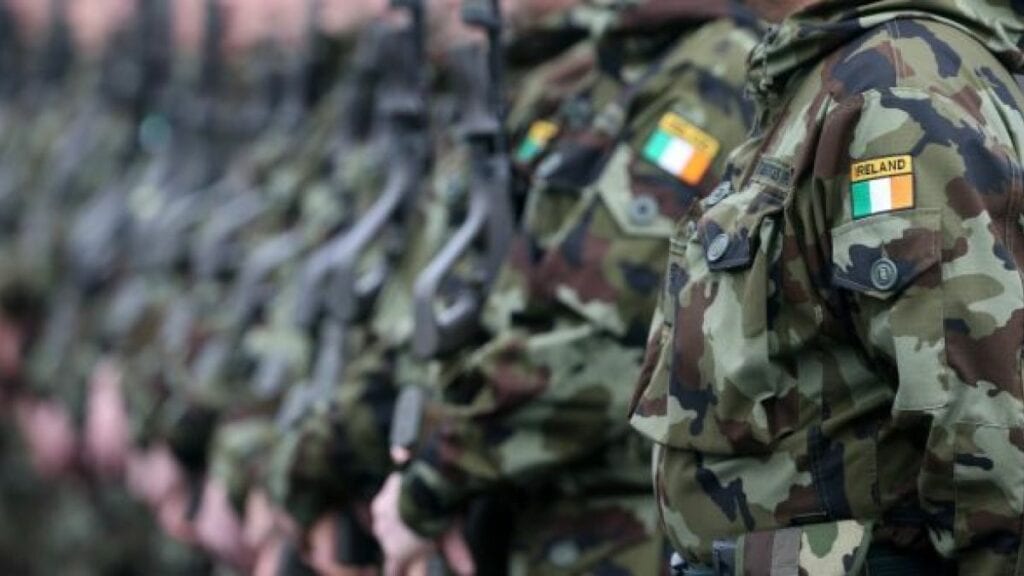 Watching the very large numbers out and about and hearing anecdotal evidence of people starting to meet again in each other’s houses, I see no way short of martial law of us achieving zero-Covid.

Just to be clear, Quinn is suggesting that a military government may need to be imposed in Ireland and the law suspended in order to keep people in their homes. Yes, a journalist is mooting the idea of stationing troops on Ireland’s highways and byways, to force people into their homes and ensure they remain inside.

As of this morning, Ireland’s National Public Health Emergency Team (Nphet) says that Ireland has had a total of 215,000 coronavirus cases and 4,136 deaths.  Three weeks ago (Friday January 29th), The Irish Times reported that: 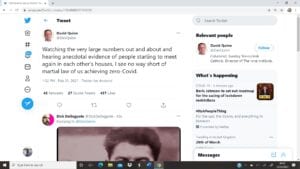 ..more than eight out of 10 people who have died as a result of Covid-19 have had an underlying condition, most commonly chronic heart disease…..

The most common underlying condition was chronic heart disease which accounted for 43 per cent of those fatalities or 967 cases in total.

Of those who died with an underlying condition, 66 per cent had one, 678 had two and 355 had three or more co-morbidities.

The mortality statistics underline the importance of vaccinating vulnerable cohorts in the population. More than 63 per cent of all deaths (1,720) were in people over 80.

The average age of someone dying with Covid in Ireland is somewhere between 83 and 86, depending on which newspaper you read. And of course we should never forget that dying with doesn’t mean dying of. This is a scam. There is no pandemic. It has been thoroughly debunked, using our collective governments own data.

Rather then eviscerate the Irish government and the medical goons advising it, David Quinn, who claims to be a journalist, would rather call for Martial Law. And the beat goes on.

Richie Allen is the host of The Richie Allen Radio show, Europe's most listened to independent radio show and is a passionate supporter of free speech. He lives in Salford with the future Mrs Allen and their two dogs.
All Posts
4.4 13 votes
Article Rating
Subscribe
Login
Please login to comment
24 Comments
Inline Feedbacks
View all comments

They’ll be holding us down and vaccinating us in the street next. I’ve been told today that I should be grateful and thanking the people that have already been vaccinated. Because if everybody was like me, and thought like me, we’d have nothing and no route out of this shitshow. Fucking HELL! 😳😂

These types will be the ones crying when their small worlds come crashing around them. Yes we’ll be affected too but at least we’re ready for it. The person that said that to you will be a snivelling nonentity when the shit hits the fan. Xx

It’s like banging your head against a wall. People too thick to see the obvious. I’m not the brightest tool in the box at times, but it’s so obvious that the whole thing is bollox. The vacant stares I get on a daily basis are starting to grate on me xx

You and I are brighter than we give ourselves credit for Jo. And we’re definitely smarter than all the epsilon’s out there lol. Xx

😄👍🏻 I certainly hope so, Kathy. Them Alpha’s can kiss my arse, lol xx

The mean side of me actually wants some of these vaccination sheeple to actually become ill as a result just so I can say “I told you so”. But grace will always win the day (even if it’s a struggle). Kathy, it is not our duty to bring people to the light look at what that did to Jesus.

I’m realising that and have decided to zip it. Thank you.

I do hope that you told them to foxtrot Oscar? Think like me i.e. hardly at all or independently, stay in line STFU and be happy about it; this is why so few can manipulate the many. An scene in the excellent movie ‘Midnight Express’ comes to mind where the protagonist convicted American drug smuggler William Hayes makes a decision NOT to be drawn into the vortex of depression suffered by his fellow inmates. When ‘walking the wheel – daily exercise’ Hayes decides to walk the other way much to the dismay of all of the other prisoners. Jo, if you’ve lost friends over this; they were never compatible in the first place. More power to you.

Thank you 😊. I definitely seem to be losing friends. I may even lose a husband because of it. Especially if vaccine passports happen. I’ll probably end up living a hermit lifestyle, which will suit me just fine. I don’t like humans much anyway 😄.

Do you remember when I said to you we’ll be the savages in Brave New World? I’d love to buy an island where we all could live without this bs. Know what you mean about the husband!

I remember 👍🏻. I’ll be right behind you, to that glorious island. Strictly, no sheep allowed.

Only the furry kind. Xx

🤣 yes, only the furry kind xx

That’s so good to hear, it restores your faith in human nature. We will all wish them every success.

Please let this come to pass. Then maybe the sheep will finally wake up.

Like those firefighters who start fires to justify their jobs, we now have journalists creating the news rather than reporting it.

It has been said that ‘the first casualty of war is the truth’.

I know exactly how to get zero covid. Stop the bogus testing, stop the fearmongering on the msm, lift all the measures and let people get back to normal. No more covid19 I guarantee.

It never takes long for these people coming galloping up the garden path does it. What’s next when that doesn’t work. Interment camps? Finally fag up against the wall and bang bang!
I am sick of reading in the comments section of newspapers and talking to people “we would be out of this mess, if people just followed the rules”
“really” I say “how’s the lobotomy working out for you”

Quinn is a disgrace to his profession