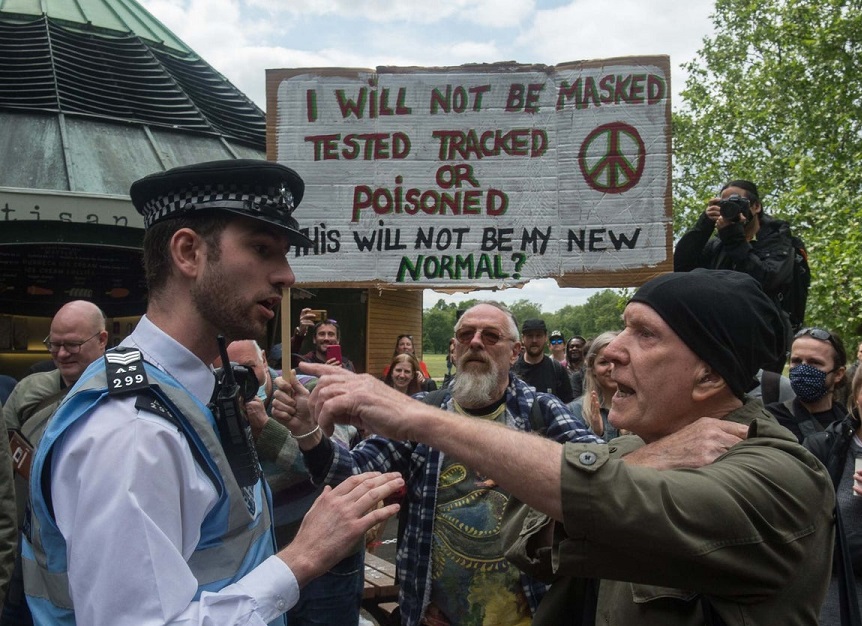 Journalist: “I Suspect (Covid) Rules Are Here For The Rest Of My Life”

Writing in The Telegraph today, Tim Stanley said that he believes government-mandated covid restrictions will be with us for the rest of our lives. Stanley believes that future variants and crises like new diseases and even climate change, will be used “to justify the reactivation of controls that this pandemic has invited.”

Stanley claims that any labelling of the current restrictions as “light” is nothing more than propaganda:

It’s true that we’re not fully locked down, and our rules aren’t as draconian as in parts of Europe, but don’t swallow the propaganda that these measures, however proportionate, are “light…..

Labour and the broadcast media will nudge ministers to go further; the vast majority of voters will comply. We have normalised the extraordinary, accepting as inevitable phenomena that contradict the fundamentals of what I was taught was the British way of life, such as snooping, emotionalism and invasive policing. Someday, we’ll have to sit down with a pencil and paper and rewrite our national myth.

I also suspect that these rules are not just for Christmas but the rest of my life, for there will long be variants – and always a crisis, be it another disease or a flood, to justify the reactivation of controls that this pandemic has invited. A precedent is set. The interesting question is when, or if, it can finally be broken.

I wonder if it has occurred to Tim Stanley that his government is not merely over-reacting to covid and its coat of many variants? He’s a bright lad, is Tim. I interviewed him several times when I was working in Spain.

Surely now, 20 months into this scam and more than 115 million jabs administered in the UK, Tim has realised that there’s something far more sinister going on?

Maybe. Or, maybe not.

Richie Allen is the host of The Richie Allen Radio show, Europe's most listened to independent radio show and is a passionate supporter of free speech. He lives in Salford with the future Mrs Allen and their two dogs.
All Posts
5 2 votes
Article Rating
Subscribe
Login
Please login to comment
16 Comments
Inline Feedbacks
View all comments

I hope the penny drops for more journalists asap.

MEDIA CONTROL is an anagram of OMICRON DELTA

Please join and share. please share this site with others; hope to reach 5 million by Christmas. launched last Friday. it doesn’t matter if you are not in Australia, sign up for resources to help support others with kids. I’ll also place this on to the main forum alongside Richie’s other stories and also personally email Richie . Thanks, Parents With Questions | Australians Say No

What took this guy so long to come to that conclusion?

I’m sure that listeners’ to Richie already know what this is all about. Just incase anyone there any doubters though:
https://www.nationalthailand.com/life/30316005
(Sorry, dont know how to attach link on here!)

Tim Stanley is a fucking idiot.
Fascism is already here
I see no point at all in replaying the tyranny – it gives ‘them’ the giggles
We need to be preparing for our survival and not wasting time on the propaganda

Well said mate. Awareness groups are all over this, which is a good thing; I only hope that it’s not too late.

the scariest part at the moment is seemingly the majority will roll over and except it, if that will change or not is a wait and see game.

Patrice, I completely agree – the undecided / enough is enough / fed up are the ones who’ll tip the balance. having to realy on these people gives me the heebie geebies…

Well said and well written Tim, but such a shame that there are so few writing , speaking words of truth. Only recently i was writing about the normalizing of all of this. Locally some of the shops and my bank, have never stopped enforcing the restrictions. Including masks and one way systems. A staff member in the bank , blocked my path, as i was going to walk past her in the wrong direction. Only seconds later to brush past me going the other way. How did the virus know which way we were walking. So many business and public dont even need to be told any more.

‘ What you look upon as strange now, one day you will come to see as normal.’

One thing i would disagree with Tim about, is his referencing a future where people are rewriting what happened. Along similar lines, of David Icke talking about what people will tell there Grand Children, about how they didn’t stand up to Tyranny. What this is ignoring , is the fact that history is being deliberately altered, rewritten and deleted over the last 20 months. Any survivors of this mass depopulation agenda, will have no future reference points of anything ever having been any different.

This whole period is being rewritten and sold, as a wonderful turning point in history. Where the world came together to beat the deadly plague. And we all learnt valuable lessons that helped us to save the planet. In the process introducing climate lockdowns, as they worked so well for viruses.

And if survivors are fused with technology, connected to a hive mind. As certain Key front men have openly talked and written about. It will no longer matter, as people will never again be able to think for themselves. This is not how these Tec plans are being sold of course, however it is very much the intention.

‘ Soon there will come a time, when people will no longer ask the question, were things better before the war. As they will never know things had ever been any different.’

Well said. People might as well go down fighting because if the psychopaths get their way life isn’t going to be worth living anyway.

I agree 100%. And right on cue the Ethiopian mutant himself, Tedros at the WHO, pipes in with the revelation that “the time has come for countries to agree on a common binding approach to a common threat”. All choreographed and staged. By the way, Icke’s Dot Connector every Friday is the highlight of my week – last Friday’s episode was fantastic.

Thanks Gerald, I generally check David, Vernon and Richie everyday. And usually post a summery of Fridays vid, with the link on here on Mondays. But didn’t today. Did you see his latest conversation with Alex Jones.

I trust and follow the same brave commentators, Fox. And an Irishman called Ivor Cummins is doing some very good work tearing holes in the hysterical official narrative. Must find that Icke / Jones exchange and ingest it tonight as this is the second time it has been recommended to me and I missed it somehow. Thanks!

In the above link, David and Alex discuss the latest developments around the world, showing latest footage.

Including news of the Fake vaccine deaths, and the horrific developments in Australia, of forced removal of residents to concentration camps. They finish by looking at the real end game. Depopulation and the fusing of the survivors into The Metaverse. The latest buzz word, for the Tyrannical mad scientist plan, to fuse us into technology.

Yes Gerald, I think the ‘common binding approach’ was agreed at the COP26 thing in Edinburgh. You will notice that since then we’ve had the sudden massive increase in testing in Austria (trial country) leading to lots of ‘Covid’ and mandated ‘vaccines’, with a follow up in Germany and other countries. Next comes the inevitable new variant leading to more draconian measures. This could lead to a new ‘vaccine’ aimed at the ‘deadly’ Omicron.