Moral Contracts. The Chances Are, Your Next Employer Will Require You To Sign One!

The next time you get a job, your employment contract could contain within it, a morality clause. This is the latest progressive driven nonsense to come out of the #MeToo movement. And today the Oxfam scandal is being held up as some sort of proof that not only are morality clauses necessary, but that they should be adopted urgently. So your next employer might seek to contractually reserve the right to fire you and even sue you if you do something in your private life, that is in breach of their moral code. The mere accusation that you have done something wrong will be enough. Companies will be able to say that your behaviour has reflected badly on their wholesome, decent, family corporate image and affected their bottom line. So you won't just be fired, you could find yourself in litigation too. Sound mad Ted? It ain't mad, it's coming down the line lads. All national news networks in the UK this morning are talking about it and their guests are pushing it hard. 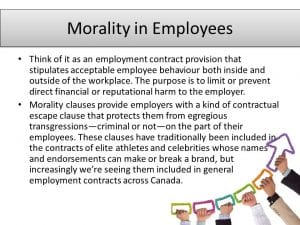 Speeding fines, court appearances for non-payment of council tax or TV license, falling behind on child support payments, possession of marijuana, misdemeanour convictions.... these are the sorts of things that could in theory be used against you. This sort of thing isn't coincidental, it is problem-reaction-solution in action. You will never have a private life again. It will be subject to the scrutiny of your employer. You might find yourself being called in to see HR, who show you a Facebook post, a video of you pissed and falling around at a party. You might have posted strong opinions on current affairs issues. You might be someone who watches/shares content from RT, The Richie Allen Show or davidicke.com. This doesn't reflect well on the firm, here's an official warning. Sinister beyond belief right? Sky News presenter Sarah Jane Mee made the point this morning, that as politicians work for us (they don't, they work for the crown), they should have to adhere to a moral code drawn up by the people. Yes, but what would the text of that moral code look like? Every second of every working day, our elected leaders act immorally right?

Also today, the UK government has unveiled a tool it says can accurately detect jihadist content and block it from being viewed. You know what? This "tool" is not really designed to seek out and block jihadist content. These measures are meant to produce false positives, meaning in reality, content that is not harmful, but rather critical or sceptical of the establishment, ends up being taken down or blocked. We are entering total lock-down. Freedom of thought, let alone freedom of speech is under attack as never before. I said to Liz Crokin on last nights RA Show, that we are becoming the mainstream media. Indy media viewing figures and overall market share is on the rise while at the same time people are turning away from the MSM in their droves. The system is aware of this and is raising the stakes. Game on I say, game on.