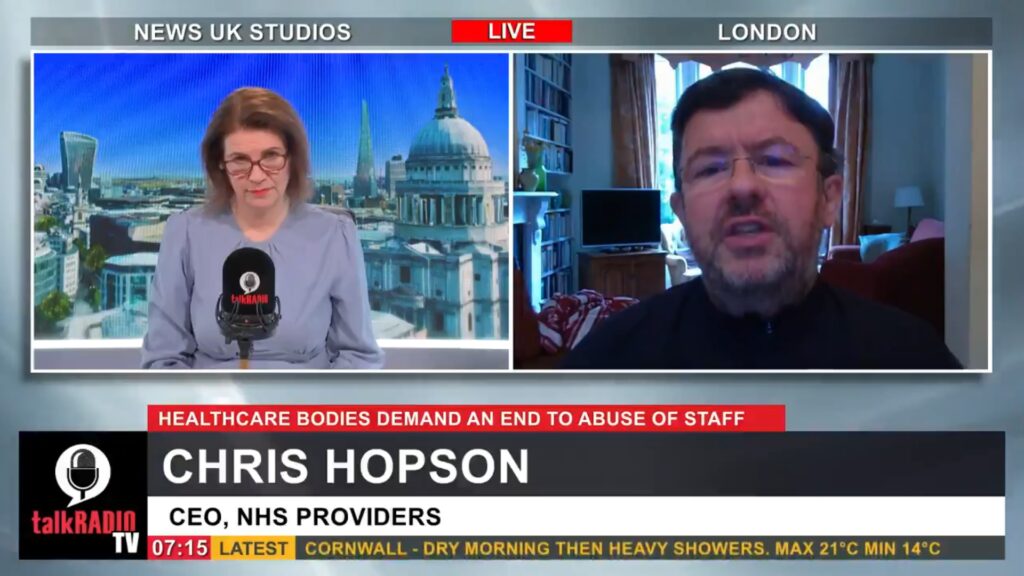 NHS Providers CEO Chris Hopson told Talk Radio’s Julia Hartley-Brewer this morning that doctors and nurses are being abused by a minority of anti-vaxxers. He claimed that in some instances the abuse has turned violent.

“There’s no doubt Julia that there is a small minority of people, who feel incredibly strongly about this, but it tips over for those people into a combination of kind of online abuse, email abuse, but also crucially in terms of frontline staff. We know that frontline staff have been saying to people, look, you can’t come in to our hospital without a facemask and without hand sanitiser, because we’ve got very vulnerable people here.

And they are being abused and in some cases even physically attacked. That is completely unacceptable. That’s why that letter has been written. We want to make it really clear that the NHS, all of us as leaders in the NHS have an absolutely zero tolerance approach to this.”

Hopson went on to say that healthcare workers had every right to go out and attempt to persuade the public to have a jab. He said:

“And also in terms of vaccinations, it’s quite right that we should be out there trying to put the arguments forward as to why people should get vaccinated. And we shouldn’t be abused.”

This is how they will crack down hard on dissent. It’s yet another example of problem reaction solution. The problem isn’t really a problem at all. A tiny minority of people are shouting abuse at healthcare workers. In extremely rare cases, it has resulted in a minor scuffle.

I am in no way justifying assaults. Not at all. They have used this tiny problem to get the reaction. The reaction came in the form of the letter from the representatives of healthcare workers.

The solution is to eliminate all dissent and equate moderate voices who are asking legitimate questions about the safety of the jabs, with a few headcases.

Healthcare bodies have demanded an end to abuse of doctors and nurses by anti-vaxxers.

NHS Providers CEO Chris Hopson: "They are being abused and in some cases physically attacked. That is unacceptable. The NHS has a zero tolerance approach to this"@JuliaHB1 | @ChrisCEOHopson pic.twitter.com/K1JNxTS7nv

Richie Allen is the host of The Richie Allen Radio show, Europe's most listened to independent radio show and is a passionate supporter of free speech. He lives in Salford with the future Mrs Allen and their two dogs.
All Posts
4.3 6 votes
Article Rating
Subscribe
Login
Please login to comment
19 Comments
Inline Feedbacks
View all comments

Maybe these nhs nurses should mind their own fucking business and do their jobs instead of trying to push a fucking vaccine agenda.

Pro and anti vaxxers are a false dichotomy the obvious position is ignored which is choice.

They need to stop abusing anti-vaxxers as nutcases, rather than well informed, medically literate individuals, who value their body autonomy and are not daft enough, to take the most lethal and maiming injections ever invented! Its fully admitted the anti-vaxx movement are far more au-fait on the science here, than the pro-vaxx fools that bought into the Safe & Effective mantras and whom are brainwashed not to look into the real stats. The jabs do not work. They increase peoples risk to covid and variants and death, plus the immediate injuries are 100X+ more dangerous than anythign seen before, whilst clearly the long term effects are kicking in and ADE appears to be taking double jabbed down fast, along with reproductive health issues and infant mortaliies. All for a common cold to 99% of people. Its lunacy and being abused for knowing reality, i.e “UNSAFE & DON’T WORK!” is a harrowing situation as social pariahs, soon destined to be labelled terrorists and chucked in camps by pro-vaxx nutcases that are rapidly dying.

“a small minority of people”… Uh huh. The same people who lied about a “deadly pandemic”, lied about masks protecting anything, lied about “asymptomatic transmission”, and who are murderously lying about “vaccines” (even the term is a LIE), are telling us that a “small minority” is refusing? They’ve been lying with statistics from the git go.

I believe the claim people declining the jabs are a “small minority” is utter bullshit, pure and simple, intended to persuade people to take the pus. Do Not Believe Anything They Say. Anything at all. It is all lies and has been from the start.

now i am not condoning abuse of anyone, nhs staff, doctors, having said that, i can see people’s frustration when in some cases people are seriously ill and are being told to get on a waiting list for 1 yr or more, for a percentage of these people, they could either end up worse or die. Death as far as we know is the end of the road, i also don’t think these tik tok dances last yr helped many people’s mood or do i think the reported 15% that nurses etc want in a pay rise and are considering strike action if they only get 3% is also helping the temperature.

Also if NHS staff are refusing entry to people who won’t or cannot wear a mask, then this is not lawful.

Last edited 1 month ago by Patrice
4

Actually I don’t believe that death is the end of the road but that life is just an experience. That doesn’t mean that we shouldn’t make this life as tolerable as possible and the psychopaths behind all this are making it completely intolerable.

The problem is if health care workers are going around telling people lies about this injection what do they expect. I will clarify their lies, it is not safe, they have no idea what it will do to ones body, they have no idea what is in it (drug companies will not say fully) it is killing and damaging people and will be on trial until 2023. tell the truth health workers and people may respect you.

Ever discussed the science behind the jabs with a health “professional”? I have, many times, and when they run out of programmed phrases they resort to “GFY” or dog whistle other pro vaxxers to pile on. There’s only so many times they can get away with that before they get something in return. It’s not right, but it’s just humans doing human things.

Thanks for this Brenda. Good stuff 😊

If they come to your door (or approach you in the street) to ask if you’ve been jabbed, just say ‘yes’. If they ask for details tell them you were drunk at the time and can’t remember. If they say they have no records of your jab status, shrug and tell them that is not your problem.
From there you can refuse any more intrusiveness such as requests for name and address, etc and can categorically state objection to vaccine passports as a step too far.
A bullheaded, completely honest approach is not going to work and could lead to further problems down the road.

Work around the problem: don’t try to tackle it head-on.
Play smart.

Just politely tell them you will only discuss your medical circumstances with your GP and they will quickly back off. I had one knock on the door and they went away very quickly.

Yep, that will do it as well: but that is already starting to be interpreted as non-compliance and an ‘anti-vax’ stance.

Like that….’drunk at the time’ 😂 got my response ready now, which is a bit more polite than my original choice 😂

If you tell them you were drunk it will end up with a report to your local community mental health and substance abuse team. They will doubtless do absolutely nothing about it but it will remain sitting on an NHS database ready to bite you on the backside at some future date when they decline an elective medical procedure because you have a drink problem.

When all roads potentially lead to Hell, focus on the immediate obstacles rather than possibilities further on.

Last edited 1 month ago by AlanTracy
1