Centerparcs has just announced that it will no longer advertise with the Daily Mail. The family holiday village operator made the decision after Mail columnist Richard Littlejohn wrote an article which criticised gay parenting. Littlejohn was writing in response to the announcement by Olympic diver Tom Daley and his husband Dustin Black, that they are having a child via a surrogate. The piece was accompanied by the headline: "Please don't pretend two dads is the new normal." A member of the public Tweeted Centerparcs asking, "My son so wants me to book at your parks, but how can I do that if you support homophobia?" The company immediately apologised to the tweeter and promised to cease advertising with The Daily Mail, "with immediate effect."

Is Richard Littlejohn homophobic? I have no idea. He's an old school right-wing writer who chucks grenades gleefully across his columns. He wants to provoke, to stir a bit of shit, but ultimately he wants to get people talking. He knew a shitstorm was coming though, saying in the piece, "Before the usual suspects start bouncing up and down, squealing 'homophobia', don't bother," adding: "I still cling to the belief that children benefit most from being brought up by a man and a woman." I wholeheartedly agree with him. I don't believe that two men raising a child is in the best interest of that child. I'll never change my mind on that. I too found Tom Daley and husband Dustin Black's conduct in announcing their news a little unpalatable. Littlejohn called it a publicity stunt. I'd go further. Their behaviour says to me that the child will be an accessory, sure isn't it all the rage? I have said on the RA Show that there has been a tendency for some gay men to view a baby as some sort of must-have. When I used the term accessory on a show eighteen months ago, I got some abuse, but not much. It's what I believe though, it is what I think. Am I allowed to think? Is Littlejohn? Are you?

You know, the Daily Mail comes in for some almighty stick. The left reviles it, sees it as a Tory newspaper and in truth, there has been some outlandish shite in its columns down the years. But these days it is not so easy to categorise The Daily Mail. While the editorial is supportive of Brexit, the paper publishes opinion pieces by pro EU writers. In fact across the board, the Mail seems to be striving for balance on most issues. For example, when Daley and Black made their announcement the paper covered it, published the pictures and reported positively on the couple. Littlejohn doesn't like it, so the paper published his piece. Fair enough right? No it isn't fair enough. 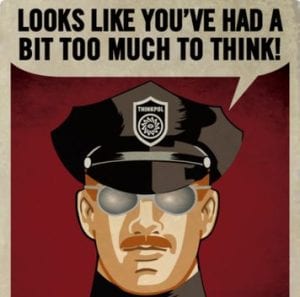 Progressive Cultural Marxists have decreed that same sex parenting and adoption is a fabulous thing. That is how you must see it then. Go against them and they will terrorise you on social media. Your advertisers will be harassed until they agree to distance themselves from you or else. Or else meaning that their businesses will be targeted. Sound familiar? Zionist Nazis employ this tactic all the time, threatening venues who have booked Gilad Atzmon or David Icke, that they will lose business if they don't do what they are told and cancel them.

It's fascism. Shame on Centerparcs, who could have said to the progressive crybaby's, "Well we don't agree with Littlejohn, but The Mail reported favourably on Tom Daley and his husband, they have many writers with many differing opinions, so we will not withdraw our advertising." By not doing that, Centerparcs is sending a message to these nasty hateful destroyers of free speech, that they can intimidate and threaten their way to the Dystopian future they are hell bent on creating, where freedom of thought will be but a distant memory.

richieallen.co.uk
Previous Who Are The “Top Political People” That Gihan Muthukumarana Claims He’s Selling Child Rape Videos To? Next Sunday View Is Live On richieallen.co.uk At 11 AM UK Time.