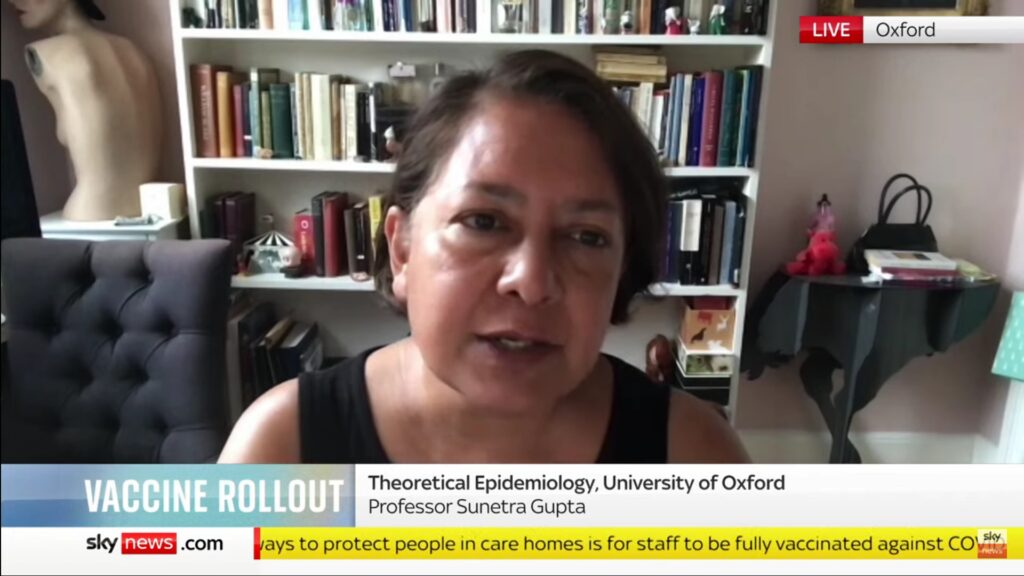 Speaking to SKY News this morning, Professor Sunetra Gupta, a theoretical epidemiologist at Oxford University, said that it is illogical and unethical to “foist a vaccine upon people in the hope that you can reduce transmission of a disease.”

Speaking about the functionality of the jabs, Professor Gupta told Kay Burley:

“They were never meant to be used to stop transmission or to allow people in particular settings to make them risk free. So it is really not logical to use vaccines to protect other people. The vaccine protects you, which if you are vulnerable is a very valuable thing.”

Burley interrupted and asked Gupta to clarify that she does not believe that NHS staff should not be forced to have the jab. Professor Gupta replied:

“I don’t think they should be forced to on the understanding simply because this vaccine does not prevent transmission. So if you just think of the logic of it, what is the point of requiring a vaccine to protect others if that vaccine does not durably prevent onward transmission of a virus?

Obviously there are all sorts of ethical and political issues surrounding this. It’s illogical to foist a vaccine upon people in the hope that you can reduce transmission of a disease.”

Burley asked her for her thoughts on jabbing 12 year-olds. Sunetra Gupta pulled no punches saying:

“I absolutely do not think that is logical at any level I mean leave alone the ethics of using 12 year-olds as barriers for infection for the community. The bottom line is that these vaccines do not prevent transmission.

In the case of the 12 year-old it benefits neither the individual who is not at risk of severe disease and death, nor does it benefit the community. To ask children to bear that risk is for me, simply unacceptable.”

Richie Allen is the host of The Richie Allen Radio show, Europe's most listened to independent radio show and is a passionate supporter of free speech. He lives in Salford with the future Mrs Allen and their two dogs.
All Posts
5 7 votes
Article Rating
Login
Please login to comment
18 Comments
Inline Feedbacks
View all comments

Finally! There is a great way you can work online from your home using your computer and earn at the same time… Only basic internet knowledge needed and fast internet connection… Earn as much as $3000 a week…Get more details on the following site……http://boxofcash2.ml/

Last edited 8 months ago by ArionRayhan
0

Last edited 8 months ago by tqrzvnk
0

Fan fucking tastic, . This insanity has to stop, FFS.

About a week ago, an NHS document was sent to David Ike and The Daily Expose, where it was stated that Drs should be given an extra £10 for each covid jab when given to a child. Since then others have confirmed this. This means a total of £22.58 given as a blood money incentive for every abused child, to these ” Healing angels” and ” protectors of our health”. A regular flue jab is approximately £9. ” First do no harm”, was once what Drs swore. Now its a case of , ” First do no harm, unless its very profitable”. Bear in mind, that some Drs surgery’s have 30 thousand registered patients, many of which of course are children.

Dr Vernon Coleman talks about child vaccinations in his latest video on the link at the top of this post.

Update. The average number of patients per Dr in England is at least 2000. All money from vaccinations usually go’s to the GP, even though it is normal practice that they have a nurse administer the vaccine. So if everyone they have registered were to have the covid jab, that it a bonus of £50,000, without taking into account the child increase been asked for. If they were to be all double jabbed. Multiply this by all the jabs that are planned in the months and years ahead. This all on top of the Drs regular wage. They are basically being paid high bonuses to push drugs. We can see now, why they love to vaccinate.

Whilst its great that Professor Gupta, says jabs don’t prevent transmission. Also that she says for this reason NHS staff should not be forced to have one, and children should not be jabbed.

Its not so great, that she is still peddling the myth that there is anything to transmit. This is simply not true in the case of a computer generated virus. Also outrageously saying.

“The vaccine protects you, which if you are vulnerable is a very valuable thing.”

Really? Life is a valuable thing, life more at risk from this fake vaccine than from flue.

I would say to anyone ,even if they believe the official narrative of lies. The reporting systems of the yellow card and particularly vares in the States which is clearer and more detailed to read, Cleary show, that the risk from Billy’s Blood clot jab, far outweigh any potential benefits for any age group, man, woman, child, pig, goat or garden frog. When that risk is compared to the chance of death from covid.

Many thousands have had life altering injuries or lost there lives as a result of these jabs. And there is a general consensus world wide that these numbers of victims have to be multiplied by at least 10. As injury’s and deaths from vaccines and other medical procedures, are often unreported or wrongly recorded.

If one is medically vulnerable, I would suggest to the Professor. That the last thing they should be doing, is subjecting themselves to this dangerous medical procedure. As they have even more chance of being killed by this injection than the otherwise healthy. But of course getting rid of those deemed to be of less use or undesirable first, is what they want. As we have seen with Midazolam and at another time in history.

She’s just playing the required game. If she doesn’t do that, she’ll get no where near the MSM.
You know as well as I do that there is strong evidence to suggest that virus theory is a myth; but if you try getting that message across to 99.9% of people they are going to look at you like you’ve lost your marbles, no matter how much evidence you show them.

The vast, vast majority of people believe wholeheartedly that there is a life threatening virus in circulation. If Gupta (or anyone else, regardless of their qualifications) tries to contradict that, they will be laughed out of town.

Recognise the battles you can win, and the ones you can’t and work with what’s available.

I can see the elderly marooned in hospital this winter as a result of a lack of staff in care homes being given DNR notices, being deprived of food and drink, and bumped off with midazolam and opiates. All to be blamed on the latest deadly Covid variant of course. Rinse and repeat……

Stanley Johnson will become the new social healthcare minister for the British Reich and implement the final solution to this long standing problem.

The two are not mutually exclusive. Someone like Gates is expensive and dangerous. But he is a known danger.

They want shot of the unproductive elderly and the disabled many of whom require expensive medical care and have unaffordable pension entitlements. Like obsolete machinery they need to be scraped. These people are not dangerous just expensive.