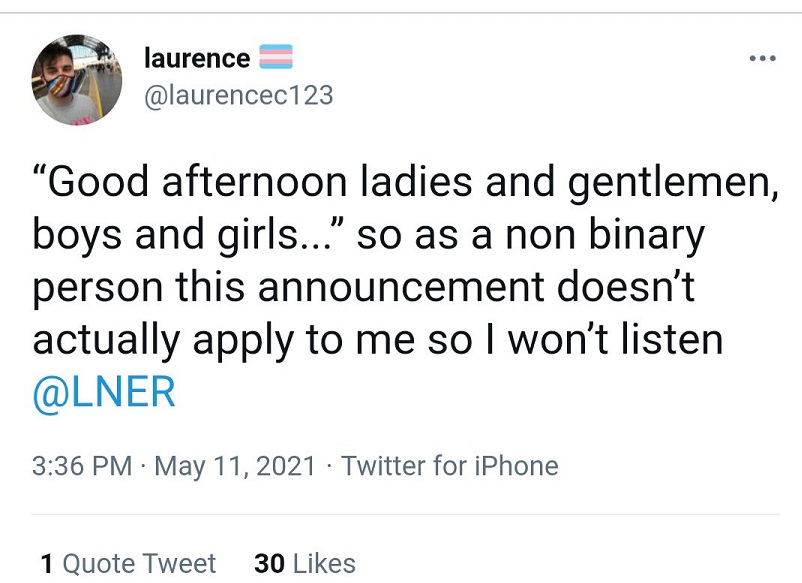 London North Eastern Railway issued a grovelling apology on Tuesday to a passenger called Laurence. Laurence was on a train to God only knows where, when he had a fit after the driver addressed the passengers as “ladies and gentlemen and boys and girls.”

Laurence, who thinks he’s non-binary, whatever the hell that is, had a proper hissy fit and took to Twitter.

“Ladies and gentlemen boys and girls” he said. “So as a non binary person this announcement doesn’t actually apply to me so I wont listen @LNER.”

If I had been running the @LNER Twitter account on Tuesday, I’d have replied; “Dear Laurence, get off at the next stop or I’ll beat the fucking Granny out of you, you little weirdo.” 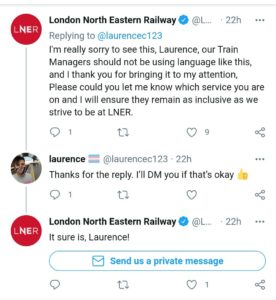 But London North Eastern Railway was awfully sorry and moved quickly to apologise to the little snowflake. @LNER replied:

“I’m really sorry to see this Laurence. Our train managers should not be using language like this, and I thank you for bringing it to my attention. Please could you let me know which service you are on and I will ensure they remain as inclusive as we strive to be at LNER.”

I’ve emailed London North Eastern Railway, to tell them that as a Lucky Charms eating Leprechaun, I will not stand for being mis-identified or mis-gendered on their trains either.

Richie Allen is the host of The Richie Allen Radio show, Europe's most listened to independent radio show and is a passionate supporter of free speech. He lives in Salford with the future Mrs Allen and their two dogs.
All Posts
5 4 votes
Article Rating
Subscribe
Login
Please login to comment
28 Comments
Inline Feedbacks
View all comments

Couldn’t they just add “other” on the end of their announcement? It’s either that or something like Ladies, Gentlemen and ABCDEFGHIJKLMNOPQRSTUVQXYZ people.

Here’s an interesting one from Polly St George concerning the Agenda and “”Transhumanism””..

Well worth a look and listen this one!!

Thanks I’ve bookmarked it for later. 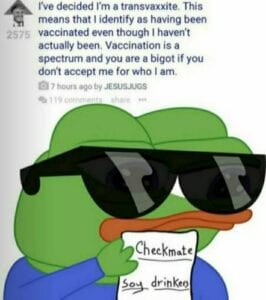 Ladies, Gentlemen, Boys & Girls (whatever you want to call them) are genders. Non-Binary isn’t. That is scientific fact, and if that offends any of you, then quite frankly I couldn’t give a fiddlers f*ck.

Lawrence needs to grow up and get a life.

This is no longer the country of Bulldogs who sacrificed and died for freedom in WW1 & WW2 (I know WW1/WW2 have their own messy origins but you get the sentiment)
But I think it’s clear we ultimately lost those wars. We never recovered and indeed began to fall as an ’empire’.
Inevitable? Maybe. That was our last Great Generation. Now we are dictatorship ourselves, except it’s our own country we wish to conquer. And we have.
Our men are ball-less, dull, empty-headed pussies who think unconscious bias training was “long overdue” and walk round with chins on a permanent period.
Our women are shrill, shallow voids walking around with wind tunnel foreheads and dingy lips (guaranteed that if God inflicts another flood then not one female between ages 21 to 38 would die).
I can’t remember the last time a stranger struck up a conversation and was actually interesting. We are in the 1978 Invasion of the Body Snatchers where everyone is the same. 1984 where everyone is There is no excuse. I almost think people deserve what’s coming.
I’m never more alone than when around other people.

Dear Laurence, Grow the fuck up a Man is a Man. A woman is a Woman if you want to be Non Binary fine, stop moaning like a 3 year old.

Was sat around the hotel swimming pool in Majorca around 5 years ago and this strange creature came to my attention just across the pool,i said too my mate ,what WTF is that/he said they call them binary i said what does it mean and he said they are like half man half woman and this across the pool was one of them,a short back and sides haircut,huge tits big arse and legs wearing a bathing costume straight out of the 1920s,horrific it was.

Ever seen an”Inclusive Bus” No?
Well you have now!
I took this picture a few months back. 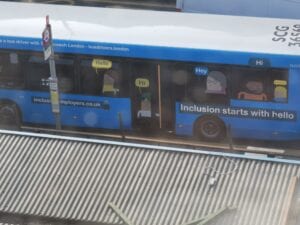 Maybe nothing.
I have a download image on my phone saying that I am exempt so if I need I just show that.
I nearly always ask the driver how they are doing, unless they are the ones that are miserable and just ignore me, and then they remember me which in London is strange as most people do not talk to each other.
My daughter asks me why I speak to them so I explain that that was the way I was brought up to show some common courtesy to people.
It has helped when I need to run for the bus and the drivers know me and wait for me to get on board.

You’re a smart fella and taught well. I’d talk to people that serve me all the time and what you say it true, they always remember.

Fair enough Lozza. Next time there’s a fire evacuation announcement, you can stay on board the train and take your chances, seeing as how ‘you’re not listening’ and that such addresses ‘don’t apply to you’; best of luck……..

So it’s alright for the police to beat the crap out of someone for not wearing a piece of rag over their face, no apology for that, but for using a polite term like ladies and gentlemen they grovel like anything.

They will have to start including BBG in their announcements when you travel Richie.

Lawrence works as a Conductor for South West Trains and is a Labour party, trade union and LGBTQ activist. He was with a girl (am I still allowed to use that term?) who works for the London Underground and is another political LGBTQ activist.
I think this was all a bit of a political stunt.

That’s interesting, thank you. Probably a lot of these sort of things are set-ups.

Quite simply the label non-binary signifies that the person in question lacks the ability to know RIGHT from WRONG.

But if he wasn’t listening, how did he know to be offended?

they will just have to use all or everyone to save all the bullshit but fuk me, what complete joke lol

Imagine dinner speeches of the future: fifty-five minutes to welcome all the different identity types and five minutes of subject.😂