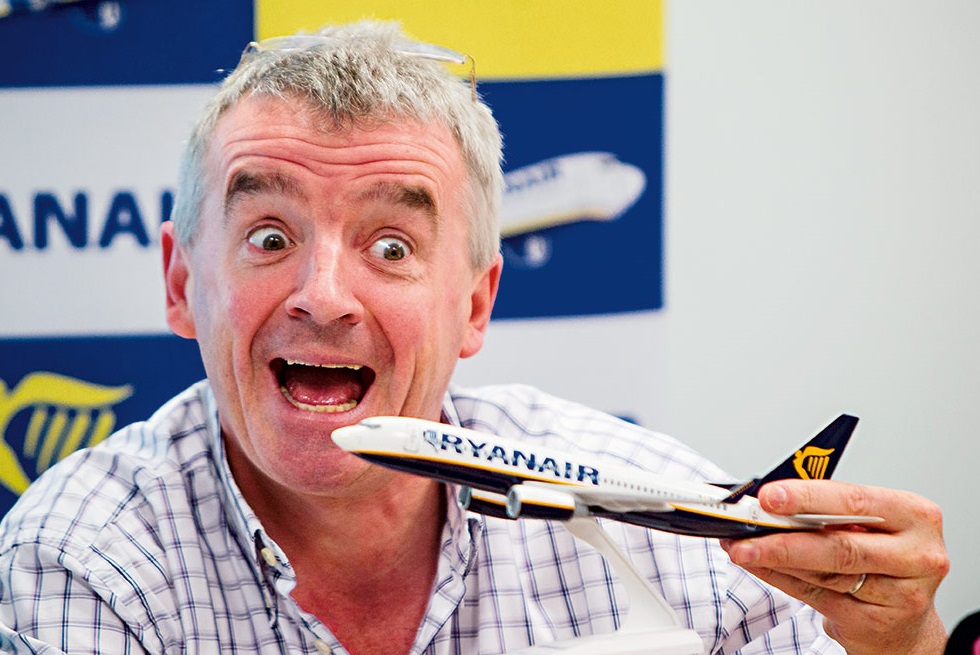 Ryanair boss Michael O’Leary has said that antivaxxers are idiots and should be banned from flying and even from entering supermarkets. O’Leary told The Telegraph:

You can sit at home and you know, get your deliveries of medicines and food. But you should not, you know, go to work or go on public transport unless you have a vaccine certificate.”

O’Leary stopped short of saying that vaccines should be compulsory for everyone. Instead, he believes that life should be made as difficult as possible for refuseniks.

“That (mandating jab) is an infringement of your civil liberties. But you simply make life so difficult. Or [make it that] there are lots of things that you can’t do unless you get vaccinated.”

According to O’Leary, mandating jabs infringes civil liberties, but banning refuseniks from participating in society is fine and dandy thank you very much.

Of course, the Telegraph reporter who interviewed him didn’t think to ask him why in his opinion if the jabs are so effective, is he so concerned about whether or not anyone else has had them.

No, journalism is dead. So is freedom. There is no escape from this.

They’re preparing s0-called firebreak lockdowns for after Christmas. The Welsh government has already said that nightclubs will close from December 26th.

In Ireland, they’ve just imposed an 8pm curfew on hospitality.

Call it what you like, authoritarianism, fascism, communism. It’s here and it’s here to stay.

Richie Allen is the host of The Richie Allen Radio show, Europe's most listened to independent radio show and is a passionate supporter of free speech. He lives in Salford with the future Mrs Allen and their two dogs.
All Posts
5 1 vote
Article Rating
Subscribe
Login
Please login to comment
27 Comments
Inline Feedbacks
View all comments

From the guy who wanted to install coin operated toilets on his aircraft?

Well I wouldn’t need to be banned to not fly on Ryanair. After a couple of bad experiences with them about 15 years ago I have never flown with them again.

I flew with them ONCE and ONCE only – never again.

Reading the responses of my fellow non- jabees here reminded me of something I read fairly recently.
“Trying to force people against their will is ultimately going to make good people want to do bad things”

There will be a great deal of slaps handed out as a result.

It does seem that the jabbed have gone insane. It must be part of the nano programming to destroy all vestige of common sense and critical thinking.
It might be that the jabbed become more brainwashed and the pure even more clear sighted.
I stopped using Ryanair years ago. It is the worst airline ever.O’Leary is just a money grabbing non entity wanting to be accepted into the cheese and wine parties.

He’s a self confessed oink and will NEVER be allowed into the upper echelons, no matter what he does. The truth is that as in the excellent Arthur Miller play the Crucible, mass hysteria has swept through those who’re too weak to think for themselves and stand their ground.

Hope he goes out of business promoting the Covid hoax. People should boycott all businesses that go along with all the nonsense.

Is he getting paid to say that or does he really believe into this?
Its not hard to read up vaccine and medical history, the vaccinated are the idiots.

What about the ones who had 2 jabs but no boosters, and who are now considered unjabbed?… Well, I guess it’s one way to shoot yourself in the foot….

does this berk not realize that the states restrictions if continued for much longer could threaten ryanairs own business? if say 5 – 10 million plus were banned from flying, that means potentially his customer base shrinks and could also mean it cannot function if say heavily in debt.

Last edited 1 month ago by Patrice
7

Let’s all remind ourselves where the term ‘refuseniks’ came from:
https://en.m.wikipedia.org/wiki/Refusenik

So in essence, O’Leary [and his ilk] are actually saying that life should be made unbearable for those who are already oppressed.

Thus certifying just how nasty a cretin this piece of work is!

I rest my case.

It’s a curious double standard, is it not, that the Press claim that likening current events to Nazi Germany is anti-Semitic while simultaneously using a term born from the persecution of Jews.

Most definitely.
More evidence of an inversion.
It’s like the planet has somehow turned inside out and all common sense and logic along with it.

In the classic Ramero sense it really is the zombie apocalypse: the mindless masses shuffling about consuming, seeking to convert or destroy any not like them.

When the Nutters run the proverbial asylum this is the kind of nonsense they would spout. This prick needs to be able to prove that the vaccine free people are infecting the so called obedient ones. Massive claim to make any way no use preaching to the converted but I am sitting in a Peugeot dealership getting my car serviced with idol fingers and thumbs a while you wait customer no mask on my face and no hassle from the masked staff just so you know.
Also whilst I am typing I went out on my Christmas party in London canary wharf to be exact I used the train to get there no mask no hassle I went to the pergola bar I think it was called no LFT result asked for no mask no hassle the venue was relatively busy and no one including the staff were masked. Moved on to the big easy for a meal this gaff was rammed so much so the drinks were very slow to come a proper buzz kill you when you start to get a hangover when you are out and not finished the drinking as a gauge to how rammed this place was no LFT required and no mask for pretty much every one no hassle moved onto the electric shuffle also rammed people all over each other no LFT required no masks on any one no hassle watching the BBC in the waiting room with some blonde girl reporting on London last night saying it was extremely quite not sure which London she was reporting on as I was there and it was certainly not quite.

Sounds good! I myself never get hassled without my mask, and supermarket workers still have a conversation with me. I feel like a hell of a lot of mask wearers don’t really want to wear it, but are scared of being left on the outside. I believe this pressure from world governments is soon to backfire, as I’m hearing many who are double jabbed saying they won’t have anymore. Gonna be an interesting couple of months ahead of us!

Mr O’leary should be asking himself why so many pilots have died this year. I hope you are wrong about “it is here to stay” Richie . They can take what ever they like from me i do not care but i care about the future of the youngest. Anyone promoting this agenda should be fired and put in the the camps they are building for the people who dare to think out side the box.

A dirty little sneaky weasel rat bastard that’s already and long since booked his place for an eternity of roasting on a spit over the smouldering coals of satans furnace.
A teacherous despicable horror of an entity that unfortunately still inhabits the same planet where we must all bear witness to his relentless incessant plundering and pillage.

In fact, satan himself may have to move over for this piece of work, as even he might find it difficult to surpass this individuals legacy.

Your day of reckoning will come eventually O’Leary.. of this you can be certain!!

And the sooner the better for all of us!!

Agree with what you say Gerry concerning this muppet. See years ago when that airline was getting off the ground so to speak, I thought that muppet was a breath of fresh air, fighting against the big boys, giving people a good deal and that, but he has shown his true colours, total creep.

He’s a member of the ‘club’ Martin.
Be under no illusions with this pile of horse shit.
He’s the sort that would sell his own mother if there was some profit to be gained.
The ultimate parasitic vulture.
Unique among scum is this thing.
One in a billion, which means there’s perhaps 7 more like him on the planet, excluding his twin brother satan of course.

How fucked can you get! All I see around me are double jabbers infecting each other, getting sick and staying off work. This guy is a prize prick! This is modern day nazism on a worldwide scale, and there WILL come a time when all these mother fuckers supporting and participating in this modern form of nazism will bow their heads in shame and apologise to the world. History will judge them as weak pathetic excuses of a human being!

So what he saying is “over the last two years, I have lost loads of money because of government restrictions. I don’t care about anybody else, if you die you die, but do as your told. So I can go back to making lots of money”

This website uses cookies to improve your experience while you navigate through the website. Out of these cookies, the cookies that are categorized as necessary are stored on your browser as they are essential for the working of basic functionalities of the website. We also use third-party cookies that help us analyze and understand how you use this website. These cookies will be stored in your browser only with your consent. You also have the option to opt-out of these cookies. But opting out of some of these cookies may have an effect on your browsing experience.
Necessary Always Enabled
Necessary cookies are absolutely essential for the website to function properly. This category only includes cookies that ensures basic functionalities and security features of the website. These cookies do not store any personal information.
Non-necessary
Any cookies that may not be particularly necessary for the website to function and is used specifically to collect user personal data via analytics, ads, other embedded contents are termed as non-necessary cookies. It is mandatory to procure user consent prior to running these cookies on your website.
SAVE & ACCEPT
wpDiscuz
27
0
Would love your thoughts, please comment.x
()
x
| Reply