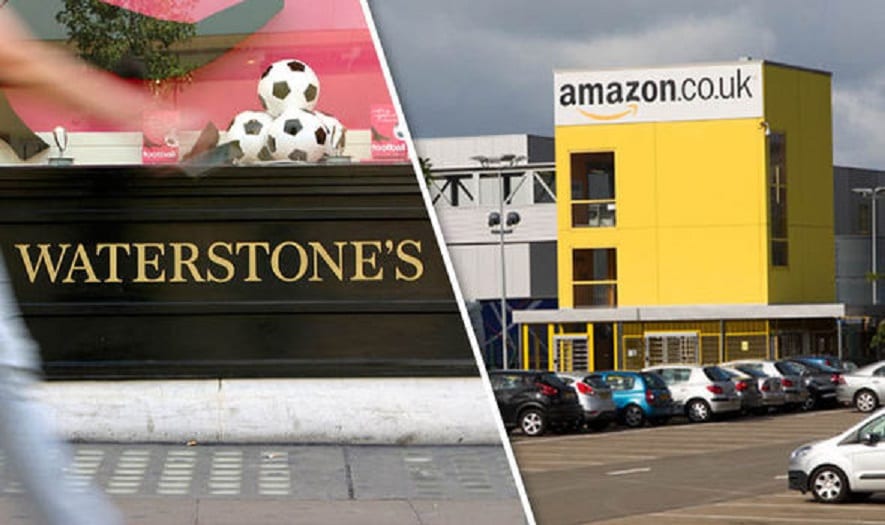 The report references a book written by Dr. Vernon Coleman entitled; Anyone Who Tells You Vaccines Are Safe And Effective Is Lying. The book has received hundreds of 5-star reviews on Amazon’s website. Dr. Vernon Coleman is a medical expert.

His books have topped best-seller lists around the world and he was a national newspaper columnist for many years. SKY asked the booksellers to explain why they were not “providing annotations” to suggest that Vernon’s book contains disputed claims.

Labour’s shadow health minister Alex Norris appears in the segment. He says that “getting the population vaccinated is a massive priority” and that he hopes “retailers would act responsibly and have a look at whether they want to be associated with such products.” 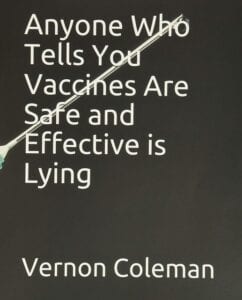 The reporter doesn’t ask Norris if he even read Vernon Coleman’s book, even though he is calling for a so-called “health warning” to be slapped on it.

This is propaganda, not news. SKY doesn’t report the news anymore, it manufactures it. It’s important to understand this. SKY is not following up concerns by parents, teachers or other doctors. SKY created this story.

A reporter at SKY News, took screenshots of the covers of books written by Dr. Vernon Coleman and Dr Joseph Mercola. He/she then forwarded the screenshots to Alex Norris in an email and asked him to respond. Norris has not read any of the books, but that doesn’t matter. He says that something must be done about them and the reporter has a story.

Look at how it appears on the SKY News website. The opening paragraph reads:

Anti-vaccination books are being sold on Amazon and the websites of Waterstones and Foyles – amid calls for warnings on items to combat the spread of misinformation.

That’s disingenuous in the extreme. The “calls for warnings” were manufactured by SKY’s reporter. It’s wretched and it’s anti-journalism, but sadly it’s all too common.

Every claim made by Dr. Vernon Coleman in his book Anyone Who Tells You Vaccines Are Safe And Effective Is Lying is backed up by hard evidence. I can say that because I’ve actually read it. I can’t speak for Mercola’s book or the others mentioned in SKY’s hit-piece because I haven’t read them.

A national news channel is promoting book burning and dressing it up as news. It’s seeking to discredit medical experts by throwing around terms like misinformation and disputed claims, without referencing a single paragraph from the books in question.

SKY is banking on it’s viewers being too lazy to ask for the evidence or to know the difference between news reporting and news manufacturing.

Richie Allen is the host of The Richie Allen Radio show, Europe's most listened to independent radio show and is a passionate supporter of free speech. He lives in Salford with the future Mrs Allen and their two dogs.
All Posts
5 5 votes
Article Rating
Subscribe
Login
Please login to comment
28 Comments
Inline Feedbacks
View all comments

When all the news outlets have sold the last dregs of any integrity they may have had left (never really seen any anyway), one is not surprised. The plebs rejoice in unison, their ego to fragile to admit they have been brainwashed into capitulation, incapable of rational thought they drool in anticipation of the next Government lie – dressed up in ribbons of lies and sold as the cure.

I bought this book a few years back along with many others. I’d trust the lovely Dr Vernon Coleman with my life. He is truly a good soul. 🥰

Me too. I love that man ❤️. He brought me to this site too.

It’s pretty clear, even to the dullest amongst us, that we’re witnessing the establishment of a cult. A rabid, in-your-face denomination which seeks to proselytize every man, woman and child on the globe. This church (lower and upper case) will not stand for any other cleric or gospel.

Heretical thoughts, words or deeds will simply not be tolerated.

I haven’t used Amazon for 6 or 7 years now because they have become way too powerful. I use my local bookshop although I can’t at the moment because they are closed due to the insane lockdown. People need to support their local shops. Unfortunately it’s the same with the libraries, also closed.

The mainstream media is now totally controlled, absolutely useless for information. They are the ones who should have warnings on about misinformation.

These psychopaths and control freaks don’t behave like adults, they have the emotions of a 2 year old (sorry if that’s insulting to 2 year olds). They can’t allow people to live their own lives and make their own minds up, they want to own everything and have everything their own way.

Sadly, we are living amongst toddlers who have nuclear weapons at their disposal.

There is a 3rd edition of Virus Mania available …JUST YET … get it while you can. I’m ordering one as I type this

this is such a bitter sweet moment for me. As i bought this exact book last April because i KNEW this would happen. I hope it is available on other platforms and we continue to support them instead. I don’t recall where i got it originally. but i unequivocally banned anything Amazon related late last year. Never again. We see you. Bastards.

Same here Steve, I had Sky many years ago for the football but I haven’t had Sky now for over 20 years. I’ve actually gone one better than that and cancelled my Tv licence years ago. Best thing I ever did !

This is a fantastic book, full of vital information. I can highly recommend it, for anyone wanting more information or to pass on to others who need to know the truth.
Absolutely disgusting that it is being banned along with other books. The only difference between what’s happening here and Nazi Germany in the 1930tis is waterstone and Amazon are not burning them in the street.

Hitler is celebrating in hell today. Whilst Douglas Barder , Nelson and Bodicia are weeping in there graves. And all without a single shot fired, sword raised or spear thrown and hardley a murmur of resistance.

T he millions taking this poison, including my own family , are like lab rats walking off a cliff into the abys.

Come on people, Resist, defy , do not comply.!

stop it, as dr vernon colemans literary agent i highly recommend this book, any questions should be directed to richieallen.co.uk, all the best urban fox.

They are trying anything to stop the truth, one just can’t understand how people will just let this government and it’s cronies stick some sort of crap in ones arm claiming it to be a vaccination when it is not, beggars belief. To have some untried procedure put in ones body and then you have no idea what the short term or long term problems it may cause tells one about how brain washed, a large part of the population are.
I will never go near any sort of mRNA injection as it alters ones body and once it is inside you, you can’t take it out. Richie and Dr Vernon have made this so clear over the months.

I had a kindle addition of dr Coleman’s book. Just made sure, I have just ordered a hard copy of it. Now the government propaganda department are on the case, concerned with our welfare, they will be banned!
not going to happen I know, but please give dr coleman 5 mins on live television with these halfwits!

He’d wipe the floor with them. When Richie plays a clip of a journalist asking a half decent question for once they can’t even cope with that.

I also order my books on kindle as I find it easier to use. Is there an alternative?

I don’t know if there an alternative. I should really look, with how evil Amazon have become. I know what you mean with finding it easier to use. I don’t know if this is any help, but I have bought kindle books, that have then been banned, and you still keep the kindle version, they don’t wipe it from your library.

Thank you Ashley. I haven’t bought an actual book for years. I don’t want to shop with Amazon so wish they’d get some competition.

In the UK there’s Waterstones, Foyles, whSmith, Alibris, Hive, Wordery and others all selling books online and also Ebay. I think the problem is that buying from Amazon has become a knee-jerk reaction and they don’t look around. Same with DVDs there’s HMV and loads of others selling online.

Thanks Jennie. I’ll look into it.

Yes as long as it was live so the bastards couldn’t edit it. ‘Our Vernon’ would absolutely batter them with facts, statistics and good old fashioned common sense. And they fully know it which is exactly the reason they wouldn’t even give Vernon 5 minutes!

Imagine having to go to work everyday and lie all the time. Read somebody’s else words over and over again. Leave your Critical thinking at the door. Turn lies into facts and facts in to lies. Celebrate when there’s a tragedy, so you can be the story, manipulate the fears of the vulnerable. Pitiful, the souls must be black and weeping into the abyss.

It’s ironic. All these large companies promote Diversity, Equality and Inclusivity in their training modules. Most of their websites use words like ‘honesty’ and ‘integrity’; but, in my experience, none of them practice any of it in a truly meaningful sense.
Honesty and Integrity? Don’t make me laugh. Any journalist with integrity would, especially on a live show, break with the script and tell it how it is.
But no; instead they continue to roll out their own disinformation using phrases like ‘for the public good’ which loosely translates as ‘for the continued benefit of my pocket’.
Integrity? These peddlers of propaganda wouldn’t recognise integrity if it danced in front of them wearing a self identifying sign.
But then the MSM are part of the corporate powerhouse that has taken it upon its collective self to impose morality training (as part of contractual obligations) on the working population; and now that they have created a fairly firm foundation, they are rolling out that training to the general population through the excuse of a bloated health scare.
Reset the public will. Reset the public thinking. To increase productivity. To make better workers.

Absolutely disgraceful propaganda! I have also read Dr. Coleman’s book and everything in it is backed up by evidence. Sadly, real news reporting is a thing of the past.

There are other doctors out there debunking this scam as well. Check it out