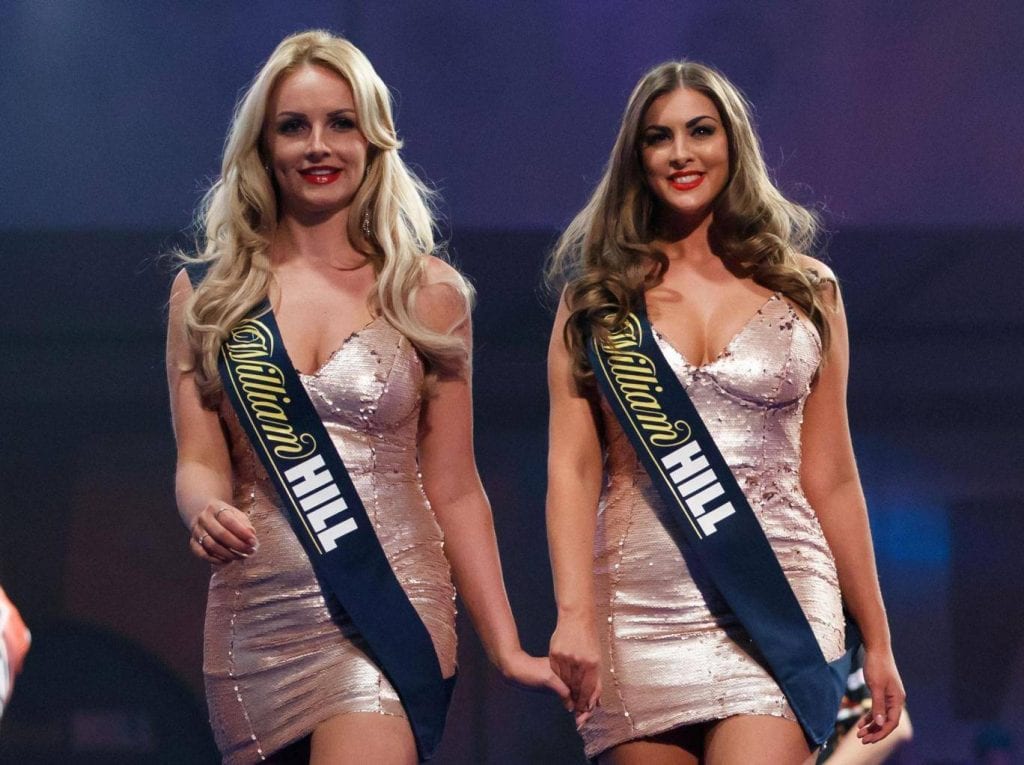 Oh alright! So they haven’t ruined the darts, I’ll keep watching it, sure I’ve been watching it since the heady days of “Old Stoneface” John Lowe, “The Crafty Cockney”Eric Bristow and the great Jocky Wilson RIP. God be with the days, when players drank and smoked their way through epic matches, while the late Sid Waddell called it for the millions watching on BBC TV, while quoting Keats, Shakespeare and Wordsworth (Sid is the greatest commentator that ever lived).  Thank God for YouTube (I say through gritted teeth of course), because younger folks just don’t believe what it was like (it really was like pissed up William Tells on prime time TV) and can look back in amazement on their smart phones. 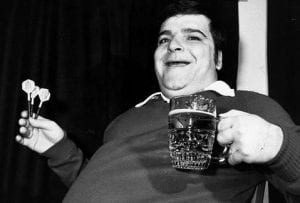 The Sport was modernised and properly monetised, after a decline in interest, by impresario Barry Hearn in the mid 1990’s. Sky Sports, threw its weight behind the pub game and since then its popularity has grown exponentially. It’s massive. Tickets for the tournaments sell out as quickly as rock concerts, the top players in the world are multi-millionaires, household names and it is live on terrestrial and satellite TV every other weekend. As a spectacle it is pure theatre with lashings and lashings of razzmatazz. Crowds of up to 10,000 rowdy revellers turn up for the tournaments, mostly young men and women, stag do’s hen do’s and those just out for a good old piss up. Fancy dress is all the rage, the madder the better. The players have cool nick names too and very distinctive shirts. It’s a great gas altogether.

Now, the players walk on to their signature music. It’s like a prize fight in Vegas, with the top ranked player walking on second. The legendary Phil “The Power” Taylor walked on to Snap’s “I’ve got the power.” Raymond Van Barneveld to “Eye of the tiger” and Michael Van Gerwen (current world number one), to The White Stripes “Seven Nation Army.” And for years, they have been accompanied on their walks to the stage, by a pair of girls, girls employed by the tournament sponsor. Most tournaments these days are (sadly) sponsored by bookmakers. The girls wear eye catching cocktail dresses with a sash bearing the sponsors name. They walk up the steps with the player they are escorting, wish him well and exit stage left. It’s fun, the girls sometimes dance to the music, they blow kisses at the TV cameras and they pose for pictures with the fans. They’re effectively acting as hostesses for the sponsor and modelling too. 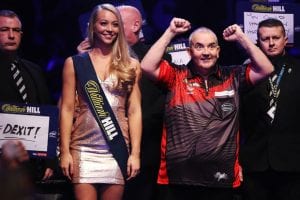 But no more. It has been widely reported today, that the sports governing body The PDC, will no longer use walk-on girls after pressure from broadcasters and fans. Hmmm. I don’t believe a word of it. I do not believe that darts fans have demanded the removal of the girls, because they are in any way offended by their presence. What’s going on?  Well according to today’s Daily Mail:

Sky is said to have taken the decision to get rid of the walk-on girls last year, with the move coming into effect for the 2018 season.And an ITV spokesman told The Mirror newspaper ,’The decision was taken in consultation with ITV and we fully endorse this move.’The PDC’s move will likely increase pressure on other sports, such as boxing and F1, to review their use of ring and grid girls. The use of darts-walk on girls has drawn criticism in the past, with critics saying the tradition is demeaning and even misogynistic.

Who are these fucking people? Name them! Demeaning and misogynistic? For who exactly? Has anyone asked the models themselves? Of course they haven’t! You know why? Because they would say something along the lines of: “Demean me? Of course not! I get well paid, I have a great time and all I do is walk the players on, pose for some pictures with the fans and do some standard corporate hospitality beforehand. How is it demeaning?”

And she’d be right! When my radio shows were on outside broadcasts over the years, the station paid models to work during the show, taking requests from the gathered public, wearing our branded merchandise, taking pictures and engaging with the listeners! It wasn’t remotely demeaning! It was a job! And they want to ban this? Who is standing up to this tiny minority of Feminazis and cultural Marxists? These people are sick, totally effing sick. But there is some sanity this morning thankfully.

Former world champion Raymond van Barneveld is supporting an online petition to reinstate the girls. As of this morning, more than 5,000 people had signed the appeal.”I will really miss the girls!! For me they are a part of the darts,” the Dutch legend said. 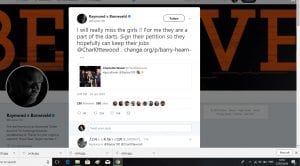 Yes Raymond, I will miss them too. They are part of it, they’re not just pretty faces, they add a lot to the experience of both the folks watching at home and those present. How dare these millennial, snowflake, take to their bedrooms whenever they are offended, miserable excuses for adults dictate what is right and what is wrong? Fuck them, fuck every one of them. Enough is enough. I hope the modelling agencies that employ the girls and the girls themselves come out strongly against this. Ultimately it is they who lose out! They’ve been made redundant because someone is offended! Fuck off and don’t watch then you cretin! We know what’s really going on here don’t we dear reader? Maybe, just maybe, the more this goes on, the more people will see through the agenda and stand up to it. I live in hope.