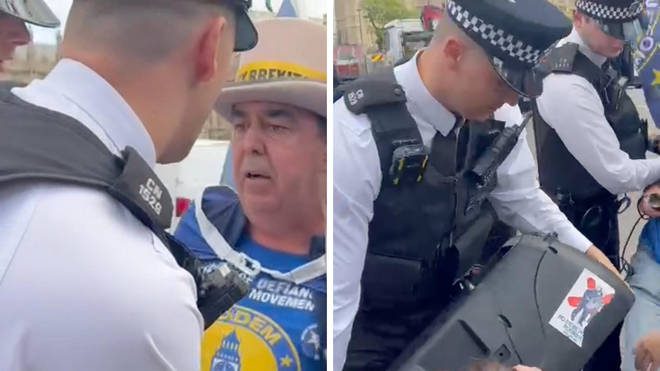 Steve Bray Is A Feckin Eejit, But He’s Got My Support Today

The name Steve Bray mightn’t mean anything to you. He’s the feckin’ eejit who has spent most of the past six years screaming “Stop Brexit” into a megaphone or into a mic connected to a sound system. Yeah, him.

Earlier today, Bray was surrounded by police who confiscated his equipment. The Police, Crime Sentencing & Courts act became law this morning. The act contains a provision which allows police to stop and/or ban a protest deemed to be too noisy.

“I’m here, protesting as normal, I’ve been protesting for the last six years or so and the police warned me twice and I said, ‘no we’re a protest.

I’m not recognising this fascist law that Priti Patel has pushed through Parliament. I put the amp on again… and they came over and started to seize the two amplifiers.

“I’m very angry but at the end of the day amplifiers are replaceable. We need more people here, we need more noise because I ain’t going to let these b******* grind me down, none of us are.

This has fast become a fascist state, when the laws don’t suit them, they change them to suit them and that’s when we need to start worrying.”

Steve Bray doesn’t know the first thing about the European Union. If he did, he’d have campaigned to leave. He’s also seemingly unaware that the UK hasn’t in fact left, not in any meaningful way.

He’s right though, when he says that Patel’s anti-protest law is fascistic. What he doesn’t realise is that the law wasn’t drafted to silence him. It was dreamed up to silence you and me and anyone else who understands the tyranny of the great reset agenda.

I doubt Steve Bray knows much about that.

I wouldn’t go about throwing around terms like fascism if I was him though. After all, he wanted the democratic will of the people ignored, because he didn’t like the result. Is that fascism? Is it authoritarianism? It doesn’t matter.

Bray is right. The Police & Crime bill is tyrannical.

Pity he doesn’t know why it’s happening though. He might be useful if he did.

Richie Allen is the host of The Richie Allen Radio show, Europe's most listened to independent radio show and is a passionate supporter of free speech. He lives in Salford with the future Mrs Allen and their two dogs.
All Posts
5 7 votes
Article Rating
Login
Please login to comment
15 Comments
Inline Feedbacks
View all comments

It’s somewhat ironic that a guy who was pushing a fascist dogma (i.e. ignoring or cancelling a democratic vote as it was something he didn’t agree with it) has now been hit by the fascist law maker’s puppets (the MET Police) enforcing a law that was intended to quell free speech. Where’s your anti-Brexit pals now me old cocker? Not out saving you from the Rozzers, that’s for sure. Maybe now you can start protesting about free speech, and not about leaving the EUSSR….

I’m beginning to think that Orwell was a time traveller. He wasn’t allowed to directly interfere with an individual event but was perhaps free to warn people about what was to come in the forlorn hope that we might see the light.

I doubt it, Orwell was just writing books based on his knowledge having worked for the Indian Imperial Police in Burma and later the BBC, he was just another part of the establishment and a good writer.

Spot on assessment Richie! The news laws coming atop this one, will be terrifying and the slide into hell will be nearly complete.

I see he has the Support of the MSM ,So this is planned to stir shit up fck the drunken sob

Last edited 1 month ago by toney
2

Sadly, he’s not the only clueless one.
I got into a brief discussion today about the supply chain problems. The supposedly erudite person I was speaking to went straight to the ‘it’s the fault of Brexit’.
I stopped talking after that. Better that than the retort I wanted to utter.

That’s what we get here all the time. I asked an assistant in the supermarket why they hadn’t had a particular food item for several weeks and she replied it was because of Brexit. I asked how that could be when it was an Irish product and she just shrugged and walked off.

Absolutely gob smacked , just reading that. Iv heard people in the shops blaming Ukraine as well. Regards Ukraine any impact has yet to be felt on most of the world apart from a handful of country’s. There needs to be more of a time lag. Regards Brexit, i was suspicious at the time, that it was a con job. Now it is crystal clear to me, that they were having a massive joke. As they knew what was coming in 2020. How have these people not noticed that with the powers that have now be rolled out over the last two years. Plus the plans that they are openly talking about, Brexit is totally irrelevant. Its now known that policy’s prier to covid were starting to cause problems in supply lines. And since covid, whole factory’s, warehouses and farms regularly closed down by goverment orders due to one covid fake test case. Truck drivers off sick with testing positive. New drivers not being able to train or get licensed. Increases in fuel costs meaning fewer delivery’s. Rewilding picking up pace meaning less farm land. Whole crops being wiped out because of mutant locust strains, due to a gates funded pesticide going wrong.{ Or right.}. Its like these people have been living in a cave since March 2020. I despair sometimes Jennie.

All of their sad little lives they have been living in a TV cave.

Hi Nev, its like the last 2 years plus never took place, the way people are some times. How’s things with you?

I am fine thank you, yes whilst in the TV cave the fear changes everyday so it’s easy to forget the old story.

I’ve talked to quite a few people. They know something is wrong, but are unable to conceive that the wrongness is deliberate.
Given that the media hasn’t bombarded them with the UN’s goals and agendas, and given that the constant messaging is always to steer clear of ‘unofficial’ sources, their inability to see clearer is hardly surprising.
We are not just up against the conditioning of a couple of years or decades, but up against the conditioning of millennia.

”The wrongness” Thats quality, can i borrow that. Thats spot on actually. Anything that is bombarded by main stream media is true. Anything not bombarded by MSM is not happening. There’s a lot of wrongness going round though wherever you look.

Use it as much as you like, my friend.

That man is a complete pain in the arse so I really don’t have any sympathy for him. That said I absolutely do not support this draconian law one little bit. I suppose the confiscation of Mr Brays sound equipment has been Priti Patel’s greatest political achievement to date.