The EU & The British Media, What A Hive Of Scum & Villainy.

Jacob Rees-Mogg is A Conservative MP. You know who he is, he’s been in the news a lot this last eighteen months. He’s the darling of the Brexiteer backbenchers in Westminster and he’s become a hero to many of the 17.41 million citizens who voted to leave the EU. A hero, because Rees-Mogg seems determined to prevent Theresa May’s government delivering a “soft Brexit” or a “Brexit in name only” deal, which May and her Chancellor Philip Hammond are determined to do. 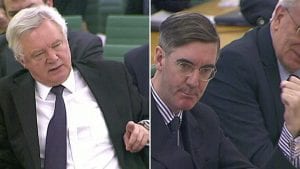 Last week, Rees-Mogg, a member of the Exiting The European Union Committee, grilled the Brexit secretary David Davis, pointing out that the government is no longer seeking an “implementation period” after the end of the Article 50 – one in which the old relationship gradually falls away and is replaced by the new – but a “transition period”, in which the United Kingdom, while no longer a voting member of the European Union, will remain subject to its rules, and continue to pay into its budget for as long as it takes for the final terms of the new trade deal to be hammered out. Rees-Mogg cornered Davis and said that this was a “shift in policy” and would end up with the UK following EU rules, with no ability to influence them and quite possibly for a long time. In other words, not leaving the EU.

Rees-Mogg and other so called “Hard Brexiteers” are outraged, especially because in the same week Chancellor Philip Hammond, who has been undermining his boss and the referendum result at every turn, suggested that the UK and EU economies should diverge only “very modestly” after Brexit. Of course we’re not surprised by this are we? This broadcaster said on June 24th 2016 that they would never allow the implementation of the result and that they would stop at nothing to reverse it. Now Rees-Mogg’s star is on the rise, for better or for worse. To me they’re all the same these wealthy career politicians, but he seems sincere in his anti-EU stance. He’s leading a revolt of pro-Brexit MP’s in his own party and there’s been serious talk of a vote of no confidence in the Prime Minister. His band of merry men and women can see the writing on the wall. He knows that left to it, Theresa May, David Davis and Philip Hammond, will not deliver the UK form the tyranny of the European Union and its super state ambitions.

So Rees-Mogg is clearly a threat to the establishment. Enter The Daily Mirror. They’ve published an outrageous hit piece on Rees-Mogg today, pathetic and totally transparent even by their own seedy standards. The headline of the hit piece:

A far-right activist who once shared a dinner table with Tory Jacob Rees-Mogg has been recorded in a hate-filled, racist rant.Gregory Lauder-Frost spouted bile about justice campaigner Baroness Lawrence , who he called a “n*****”, and broadcaster Vanessa Feltz , who he dismissed as a “fat Jewish s**g”. He also talked of deporting non-whites to their “natural homelands” as he was covertly taped by anti-racism group HOPE not hate who are making a film about the rise of the alt-right. Mr Rees-Mogg, a Tory favourite for Prime Minister, was snapped sitting next to Lauder-Frost five years ago at a dinner of the Traditional Britain Group, of which Lauder-Frost is vice-president. Facebook photos showed the controversial backbencher at the black-tie event, surrounded by dozens of mainly young and entirely white dinner guests. The Tory later said he regretted his decision to deliver the keynote speech to a group that wants “voluntary repatriation” of black Britons such as Doreen Lawrence, mother of tragic Stephen, who was murdered by a racist gang in 1993. Lauder-Frost told of his opposition to Baroness Lawrence’s 2013 appointment to the House of Lords when he spoke on Feltz’s BBC London radio show at the time.

And of course it is accompanied by a picture of Rees-Mogg and the alleged vile racist. This is all the rage these days eh? if you want to destroy someone, simply trawl through their FaceBook and Twitter accounts, find something they said or did, or a picture of them with someone you identify as racist and off you go. It’s a race to the bottom, it really is. Rees-Mogg never used the word nigger to describe Baroness Lawrence and he never called Feltz a “fat Jewish slag.” But it doesn’t matter, the implication is that he numbers among his friends, those who say such vile and indefensible things.

And of course it is no coincidence that on the same day we get the hit piece on Rees-Mogg, a leaked government document (timely leak eh?) suggests that the UK economy will grow more slowly outside the European Union, no matter what deal is struck with Brussels. The leaked document was titled “EU Exit Analysis – Cross Whitehall Briefing” and it was drawn up for the Department for Exiting the EU. It found growth over the next 15 years could be up to 8% lower than if the UK stayed in the EU. It’s a coordinated effort, to both discredit Rees-Mogg the public face of Hard Brexit and scare the British public into believing that we’re heading for financial Armageddon if we leave. The same doom-mongers warned before the referendum, that a vote to leave would have instant catastrophic effects on the economy. Of course it didn’t.

The UK mass media is whoring itself for the EU and it’s doing it 24 hours a day, every day. That’s a symptom of Fascism of course. 17,410,742, 52% of those who voted, voted to leave this anti-democratic, tyrannical den of villainy. It won’t happen. The question is, when it dawns on those people that they have been had again, what will they do about it? We’ll see.