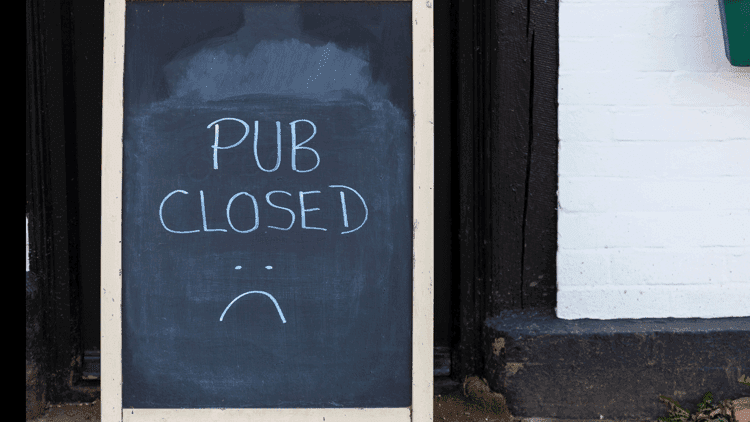 There Are Fewer Pubs In England & Wales Than Ever Before

The number of pubs in England and Wales has fallen to a record low. Real estate advisers Altus Group carried out research which suggests that lockdowns and rising business costs are to blame.

According to The Guardian:

Pubs that have disappeared from communities have been demolished or converted into other buildings such as homes and offices, the research from the real estate advisers Altus Group says.

The hospitality sector has faced immense challenges in recent years as it recovered from the pandemic, which resulted in national lockdowns that caused closures and reduced demand.

However, the researchers suggest that while pubs managed to battle through Covid-19, they are facing a fresh challenge because of record-high inflation and an energy crisis.

Two hundred pubs vanished from English and Welsh communities from the end of 2021 up to the end of June.

The biggest drop was in the West Midlands – 28 in only half a year – followed by London and the east of England, which both lost 24.

Pubs in the overall count are those that must pay business rates, including those vacant and being offered to let.

According to research from the British Beer and Pub Association, the British Institute of Innkeeping, and UK Hospitality, only 37% of hospitality businesses are turning a profit.

The rising cost of energy, goods and labour were identified as the biggest factors behind falling profits.

The hospitality industry has called on the government to provide more support.

Emma McClarkin, the chief executive of the BBPA, said: “When pubs are forced to close it’s a huge loss to the local community, and these numbers paint a devastating picture of how pubs are being lost in villages, towns and cities across the country.

“As a sector we have just weathered the hardest two years on memory, and we now face the challenge of extreme rising costs, with only one in three hospitality businesses currently profitable.

“It’s essential that we receive relief to ease these pressures or we really do risk losing more pubs year on year.”

I read a piece in one of the broadsheets recently, The Telegraph I think, that said working in a pub is a rite of passage for young people. Amen to that. At 15, I collected glasses in a city centre pub. Aged 18, I was behind the bar and also behind the decks in the deejay box.

I learned my social manners in a pub. I made lifelong friends. I learned the value of hard work, the independence of owning my own money and buying what I wanted to buy without having to ask for help.

If I needed information of any kind, I got it in my local pub. Does anyone know a good plumber? A mechanic? The pub was the focal point of the community. It sponsored the local GAA and soccer teams. It hosted our 21st birthday parties.

Can you imagine seeing a good play or film and not filing into the pub afterwards to chat about what you’d just seen?

I’d normally bang on about this being part of the Orwellian Great Reset Agenda, but I’ll spare you.

This is having a knock on effect on chippies.

A lot of chip shops are listed as up for sale. Lots are struggling.
https://news.sky.com/story/amp/food-shortages-could-force-a-third-of-fish-and-chips-shops-to-close-12613442

Chip shops have raised prices now. They’re almost as expensive as a takeaway. They don’t get the 11pm rush anymore because no-one is exiting when the pubs close.

Of course the lockdown is being blamed, as is the conflict in Ukraine. However, I think that this is disingenuous. Key ingredients (potatoes, fish, peas, curry powder/sauce, pork, etc.,) could be sourced in the uk. Policy is driving this deliberately.

can someone start a petition for pubs to be exempt from rates and excess taxes like the big corps?

Almost everything part of ‘normal’ life is being erased, wiped off the social map.

There are a handful of little gems here that have managed to survive and weather the storm thus far. Real ale pubs with a mix of clientele ranging from the highly educated to the young about to experience the right of passage,to the elderly who’s historical knowledge is just fascinating to listen to.

It’s like being transported back in time as you walk through the doors.
God I hope they succeed in keeping them open for some time yet.

Support them. Stop in and buy a packet of crisps, even if you don’t stop for a drink.

After that ban a lot of the old timer regulars (those who brought in the money during quiet spells) ceased their patronage; and many pubs started to serve more food and become more family orientated businesses – and that also drove away many who felt censured by the presence of children (I have worked in pubs and witnessed parents with kids complaining about the noise and swearing of other customers).

And then there are the increasingly familiar TV screens adding a layer of genuinely intrusive noise while simultaneously drowning out, or even silencing, conversation.

With each piece of legislation that has impacted their business, the pubs have had to try new things to survive – and yet those new things have often driven away many customers.

In the late 2000s, many of us could see the unfolding trends. To anyone who would listen, we warned that the varied and vibrant pub industry had been targeted for destruction.
I know that I, for one, was dismissed as a crackpot. I sometimes wonder what those nay-sayers think now. Have they cottòned on, or do they continue to live in denial and make excuses?

Even when the cafes opened for a few weeks here in Ireland during the scamdemic the pubs didn’t. As Richie says pubs are a gathering place and a source of information. The last thing the psychopaths want is for people to mix with each other and to share information and of course having fun is no longer allowed.