I don't know which is worse, the Truther Industrial Complex or the idiots who follow it and share the daily click bait shit it vomits forth. You will know by now that at the time of writing, at least 17 people are dead after a 19-year-old man opened fire at a high school campus in Parkland, Florida. The suspect has been named as Nikolas Cruz, a former student at the school who had been expelled. As the attack unfolded students were forced to hide as police swooped in on the building. It is the sixth school shooting in 2018 so far. Mass shootings are common in the US, I've covered dozens and dozens of them, since the late 1990's. 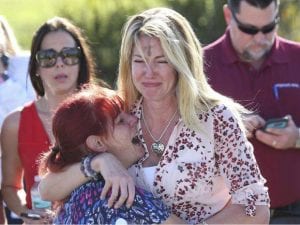 It didn't take long last night for the heroes of the Truther Industrial Complex to fill their boots. "There was a drill scheduled for that day" they cried. "It's a hoax like all of these events" they claimed. Yeeahhh.....but the drill was a fire drill, a fire drill not a shooting drill. Don't let the truth get in the way of a good story right? Many of these morons are based in Europe. How they can know the full story and who was really responsible is totally beyond me. They were posting within seconds, that's how farcical it is. One of these truthers, a guy based in Spain who calls himself a public figure on Facebook (always makes me laugh that) actually told his followers; "Not sure what this is yet..." And they lap it up like the intellectually lazy bastards they are. You're in Spain numbnuts, how the fuck could you know what is going on? But it's all about click bait.

The irony is so thick you can choke on it. These pretenders lament the fact that people won't question the information disseminated by the BBC or SKY, yet they thrive on the financial support of those who rinse and repeat their every public utterance. If they say it was a hoax with crisis actors, share share share, don't question it. If they tell you that colloidal silver will cure your diarrhoea, share it, don't think, never ever think, just share. The Truther Industrial Complex is worse than the mainstream media. If they tell you that a shooting is a hoax, while people are running screaming for their lives, don't question, believe it and share it. Never mind the fact that your hero is posting from his bedroom somewhere in Europe. So I don't know which is worse, the Truther or those who consume his bullshit. Now buy a ticket to his three day conference. Meet your hero, the resistance is in safe hands. 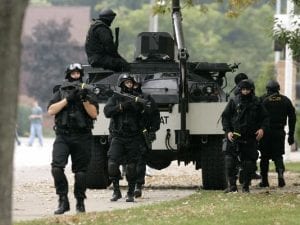 For the record, I am well aware that there is a long term plan to disarm responsible gun owners in the United States, I've spoken about it many times. I am also aware that this shooting will be used by some to advance that cause. I'd be worried too if I was in the US and witnessing the hyper-militarisation of the police. At the same time your elected officials, who should be stopping the police turning into Robocop, are trying to make it more difficult for you to own a gun. I get it. Staged events (where people ARE killed or deaths are faked) have been and will be used to change public opinion. There's no doubt about it. But I am also aware that buying semi-automatic weapons either through official channels or from unscrupulous dealers, is as easy as buying a chicken dinner. Nutters do get guns, nutters do go on shooting sprees and Truthers will always exploit that for financial gain. Wake up they say, wake up. Truther loves telling you to wake up. I say wake up to their bullshit. Don't be such an easy mark.

richieallen.co.uk
Previous Was Weather Modification Technology Used On Haiti To Let In Disaster Capitalist Vultures? Next Who Are The “Top Political People” That Gihan Muthukumarana Claims He’s Selling Child Rape Videos To?