I can't help but think, that if Emmeline Pankhurst was alive today, she'd punch Theresa May right in the nose and then go looking for Amber Rudd, while reminding herself not to forget Anna Soubry and Stella Creasy for good measure. Mustn't forget Soubry! By the way I'm not advocating violence against women, not now, not ever, but Pankhurst loved a good dust up. She and her daughters blackened the eyes of several bobbies in their time. Good for them and no, I'm not a hypocrite, violence against men isn't OK either, but the circumstances were exceptional. 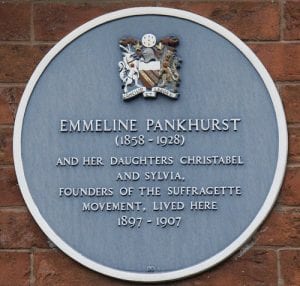 She was born just down the road in Moss Side, about ten minutes walk from where I am. I won't bore you with that which you already know about her legacy. She was an extraordinary woman and human being. She led the British suffragette movement, helped women win the right to vote and campaigned for workers rights and civil rights everywhere. She must have  been larger than life and amazing to be around. One hundred years ago today, The Representation Of The People Act was given royal assent and women aged 30 and over were thereafter entitled to vote.

So it's all over the telly and the radio this morning. Every female broadcaster, writer, politician and athlete within arms length are being dragged on to virtue signal to the moon. It's all rather annoying! You know why? Because I don't think Emmeline would like any of these women. I think she'd despise them to be honest. Because the women being rolled out to wax lyrical about the suffragettes and their achievements, are the same women (the very same) who want men to be fired for touching them on the shoulder or asking them out on a date, the same women who want misogyny to be criminalised, the same women who want to put other women out of work (darts, Formula 1) because their very existence offends them and the same women who want to allow trans women work in women's shelters and even take part when political party's decide to select a female candidate.

Emmeline Pankhurst wouldn't recognise these women. In fact I am sure they would properly boil her piss. So to Theresa May then, who will  demand today that women MP's are protected from hate speech and harassment online. Pankhurst would be apoplectic that these women would dare call themselves feminists. If she were alive today and some cowardly eejit trolled her on Twitter and threatened to rape her, she would offer him out and then knock him the fuck out. Likewise some guy that touched her on the knee or asked her to wear a short dress and racy knickers as she served him. She'd have served him alright! Think Lorena Bobbit! The TV is on as I write this. Home Secretary Amber Rudd (virtue signalling to beJesus) is saying she'll get pardons for the suffragettes who spent time in prison. Again, can you imagine what Emmeline Pankhurst would say to Rudd? It wouldn't be pretty.

richieallen.co.uk
Previous The Thought Police Are Knocking On Doors & Warning People About Their FaceBook Posts! Next Theresa May Wants To Censor Social Media To Eliminate Dissent & End Free Speech Once & For All!