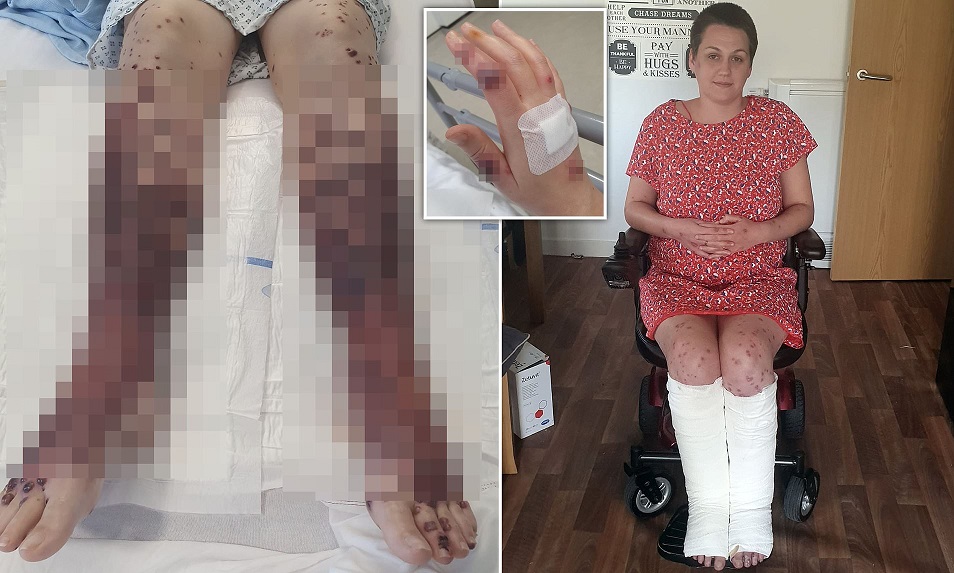 A Glaswegian woman has claimed that her legs erupted in painful blood-filled blisters after she received her first dose of the Oxford-AstraZeneca vaccine.

Sarah Beuckmann said that she had flu-like symptoms after receiving her first dose back in March, but noticed a tingling feeling in her legs days later and a rash around her ankles. She phoned her GP, but by the time an appointment had been arranged, her skin was already blistering. 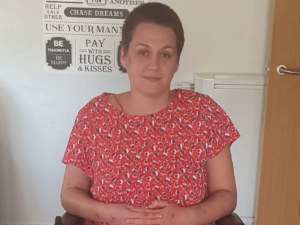 The mother-of-one was rushed to Queen Elizabeth University Hospital, and claimed at one point she feared her legs might have to be amputated.

Ms Beuckmann spent 16 days in hospital, with blisters also appearing on her hands, face, arms and bottom. She was discharged to recover at home but is wheelchair-bound because she struggles to walk due to the bandages on her legs and blisters on the soles of her feet.

British skin experts told MailOnline it appeared she had suffered an extremely rare reaction to the vaccine.

Her doctor has advised her not to receive the second dose of the AstraZeneca jab.

Speaking to The Mail Online, Dr Emma Wedgeworth, a consultant dermatologist and spokeswoman at the British Skin Foundation, said that Sarah had likely suffered a reaction to the jab.

Vaccines are designed to activate the immune system,” she said.

“Occasionally people will have quite dramatic activation of their immune systems which, as happened in this case, can manifest in their skin. This poor lady had a very severe reaction, which thankfully is extremely rare.”

A woman spent sixteen days in hospital with excruciatingly painful blood blisters that spread from her legs to her body and on to her hands and face. It got so bad, she believed she would ultimately lose her legs. What manner of pus and shite is going into these vaccines?

And as ever, the medical fraternity cries: “Nothing to see here, it’s very very very rare! Don’t worry, keep coming forward for your jabs when you are summoned.”

No thanks, you’re alright there. I’d rather take my chances with a sore throat and a cough.

Richie Allen is the host of The Richie Allen Radio show, Europe's most listened to independent radio show and is a passionate supporter of free speech. He lives in Salford with the future Mrs Allen and their two dogs.
All Posts
5 9 votes
Article Rating
Subscribe
Login
Please login to comment
16 Comments
Inline Feedbacks
View all comments

Something Strange Is Happening To Women After The Jab.

Thank you, dear Richie, for clarifying the Spotify thing for us. As a result, i have deleted Spotify and am now listening on your recommended Podomatic. 🙂 Once all of this is over, the Richie Allen show will retain my allegiance, along with the UK Column and all other sources who have proven they have integrity, and i will be shocked if msm ever gets ratings again. Btw, i, nor my bf, nor my 3 wee ones have never had a convid test, never will and we will never have the poison. Thank you for all that you do, dear Richie. Take care. Love, respect, and appreciation from Florida. 🙂

Anyone know if Richie has had Michael O’Bernicia on recently? Just reading up on his PCP case against Hancock, Whitty, Vallance and Ferguson fascinating stuff

Everything is an “Extremely Rare Reaction” until it happens to you…

It’s not bloody rocket science that a product that skipped animal testing is having side effects. The thought of this experimental “Gene Therapy” tested on animals does not sit well with me.

I’ll bet she can’t wait to to get out of hospital and get down the vaccination centre for her second dose. It’s worth losing your legs if you know you’ve been given immunity to Covid. Do what Patrick Vallance says and even if you don’t want it get it for your country. Be patriotic and love Boris and the Royal Family.

The only virus worth worrying about is the mind virus which appears to have infected the majority of the world’s population. The insane psychopaths who created this virus need to be exposed at every level for the voodoo to be stopped in its tracks. Even though you have spoken of your reluctance to credit UK Column news Richie, I would point all your listeners to tune in at 1pm Mon, Wed, Fri for a no nonsense appraisal of what is really going on and who is accountable for this tyranny within Government and their agencies. Another brilliant account of the agenda is unravelled Sundays at 9.30pm by Mark Scott on Windows on the World which can be found on Spreaker. I’ve yet to find any shows that can hold a candle to these two.

Do Richie and UK Column “not get on” for want of a better phrase?

The governments own yellow card vaccine adverse reaction site, latest figures are showing thousands of reactions and now over 800 deaths!
Yet Boris on the podium again saying nothing to see hear!
😤

Boris Johnson is starting to make President Richard Nixon look like a complete amateur when it comes to telling whopping great filthy lies. Good old Tricky Dicky was a master of lies who would be having a bad day if he hadn’t told at least half a dozen porkies by lunchtime. He even lied when he didn’t have to just to keep his hand in. If he were still alive he would be so proud and impressed with Boris.

I’m inclined to think that the jabs are triggering underlying genetic disorders.
But then, they are gene therapy drugs and that implies the ability to give as well as take away.
But hey, that’s just my humble opinion.

-and/ or the fact that there’s anti freeze and i do believe mercury, along with whatever else they’ve conjured up in the name of fighting this killer virus [hahaha] Though im SURE there’s nothing wrong with injecting those ingredients into your body, it’s all been safety tested. Nothing to see here.

They contain aluminium which according to scientists who’ve studied the effects of aluminium, notably Dr Christopher Exley who Richie interviewed, shouldn’t be allowed anywhere near the human body. I remember some years ago replacing all my aluminium cookware with stainless steel because of health warnings. I do believe that these heavy metals in vaccines are a likely cause of the massive rise in the number of children with autism.

Give a monkey admin rights to your PC or smartphone. Show him how to add and delete random files and edit code, reward that hard work each time with a bananna. Within a short time frame unpredictable random stuff will go wrong. Sometimes barely noticable sometimes seriously bad ie the fatal BSOD. 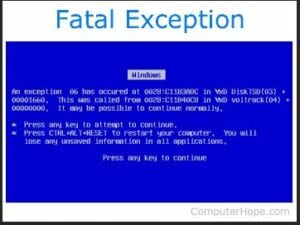 Last edited 16 days ago by sovereigntea
2

Richie, may I suggest a guest for your show who’d be a great education for your audience around the world? Perhaps it would help folks to see through the bullshit resulting in less injuries like the one in this article … just my 2 cents.
Amandha Vollmer. A video (I enjoyed every minute of it) is posted on my page.