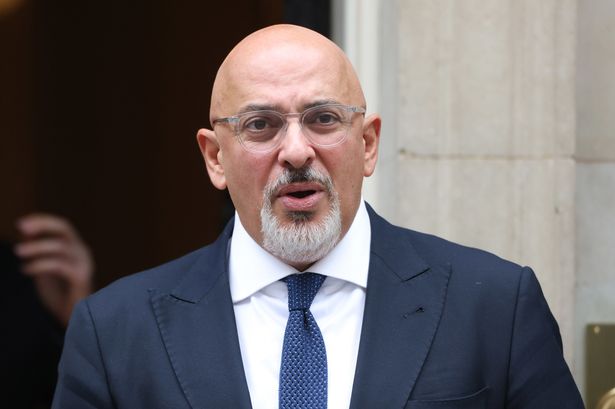 The Education Secretary Nadhim Zahawi was chased out of a university campus by trans activists who accused him of inciting hatred through his definition of woman.

The Education Secretary was met by dozens of student protesters chanting “Zahawi is a transphobe” and “Tory scum” while visiting the University of Warwick on Friday.

The Cabinet minister had to be ushered away from campus by security guards in dramatic scenes, as he was pursued by activists brandishing trans flags and placards.

The furore began when Warwick University’s Conservative Association invited him to the campus – one of Britain’s 24 top-flight institutions – to speak to students.

The Warwick student union’s society for “Lesbian, Gay, Bi+, Trans, Undefined and Asexual/Aromantic”, claimed he “plays a significant role in institutionalised transphobia” and that his presence on campus “clearly violates SU by-laws on equality and diversity”.

The students also claimed he had used “the common transphobic dog whistle ‘adult human female’”, after he stated his definition of a woman last month and addressed the Labour Party’s floundering over whether a woman can have a penis.

Following their unsuccessful attempt to have him deplatformed by complaining to the student union, about 30 students gathered outside the lecture hall where Mr Zahawi was speaking and chanted “Tory scum”. An eyewitness said they were banging on the doors.

As the Education Secretary left a second talk to the Conservative Association’s members following two hours on campus, videos obtained by The Telegraph showed them pursuing him out of the venue while security staff tried to protect him.

What does it take to get kicked out of a university in 2022?

Who gives a damn if someone is asexual or aromantic? Why do these idiots define themselves in these ways?

Good questions, but they won’t answer them. They definitely won’t come on shows like mine where they’ll be asked tough questions. I’ve extended invitations. “We don’t debate transphobes,” is the inevitable response.

Transphobe? Scared? Of a man who believes he is a woman? Pleeeease!

A woman is an adult human female. Anything else is fetish or fantasy.

Enough with these goons now.

Richie Allen is the host of The Richie Allen Radio show, Europe's most listened to independent radio show and is a passionate supporter of free speech. He lives in Salford with the future Mrs Allen and their two dogs.
All Posts
5 1 vote
Article Rating
Login
Please login to comment
11 Comments
Inline Feedbacks
View all comments

Policies by Zahawi and his chums have caused the deaths of tens of thousands of people over the last two years.
But, by all means, get uppity when he uses unfashionable wording…

Millions killed according to other millions but nobody gets to know as most all information outlets are controlled by money. Most people are owned by a corrupt system, bought into it they did, thinking it would look after them. Yes, I know that you know this I am just saying.

Among humans, two X chromosomes make a woman, and an X and a Y chromosome make a man. I am not aware of any treatment that can change this. So, biologically, one is either a male or female depending on chromosome types. How one feels and acts however is a different thing – but shouting and abusing people because they say something that you don’t like is just plain childish. Everyone should remember that it’s not what you are, or think you are that matters, it’s how you behave.

What of genetic disorders where extra chromosomes exist?
The Klinefelter’s Association estimate (based on scientific research) that 1 in 600 men have at least one extra ‘X’ chromosome throughout the cells in their bodies.

Last edited 28 days ago by Craig
0

I have a feeling that in a few years time this article would be classed as a form of hate speech. Richie could, and many people will, be financially restricted, de-platformed and in the most extreme cases, jailed. Serious shit just for taking the piss out of a transformer, or a shirt lifter who has no a sense of humour.
This with Zahawi is just the organisers of this farce flexing muscles to see how far they can get. It must be stopped now and everyone including the alphabet queers, transformers and shirt lifters need to change their sense of victimhood for a sense of humour.

A few years ago I would never refer to people with different sexual preferences to mine in the derogatory way I have just done.
I do apologise to any gay folk who took offence. These sexual slurs only started when the crazy ones started trying to sexualise children.

Last edited 28 days ago by Abdel
3

Undoubtedly for me one of our greatest challenges ahead will be dealing with what the unelected “leaders” who have bought off the majority of governments and community leaders have planned for society.
The next threat to our society, coming in a close second imo is the generation of the young who have been fully indoctrinated by the gender bender cult.
They are so immersed in and conditioned by gender fluidity that they will accept anything any tyrants propose as long as they get affirmation that a man can have a cervix, a woman a penis or one of the many mythical genders.
They will sit with and support the tyranny and will ergo see us even more as the enemy. These are the type of maniacs who will fight for their beliefs.
They’re more of a threat to our way of life than those who are merely asleep and ignorant.
Their number is growing and these woke persons are the people who need deprogrammed and woken up to what is occurring.
Unfortunately I don’t have the answer as how to do that. Any suggestions are welcome because I’m getting nowhere with my 30 year old daughter now living as a man. I don’t want her to think of us as the enemy 😔

Well said. A lot of the young are well and truly indoctrinated in all the establishment trendy beliefs. I saw a group of perfectly healthy looking young men in their 20s on the train the other day all wearing masks and it is hard to find anyone in their teens or 20s who is not fully on board with the global warming scam.

It must be very difficult for you with your daughter. There have always been more feminine men and more masculine women but they still lived as the sex they were born into, no reason why they shouldn’t, but then they weren’t being subject to endless propaganda and mind control. I wish I had suggestions to give you but I suppose love and patience, which I’m sure you are giving her, and to explain to her that people in the past were able to live their lives without resorting to such drastic measures.

Hi Jennie. I have love in abundance for her and I’ve definitely had to employ patience with her. When she first told me I was instantly supportive of her and obviously had lots of questions but she was so very defensive and quite aggressive when I spoke to her about it that I just don’t broach it anymore.
She’s my bairn whom I’ll always love and I just have to unquestioningly accept that my daughter has a beard.

How interesting re yr daughter Vikki: When you say she’s now ‘living as a man’ is it that she ‘identifies’ as male or is it deeper? As in is she in process of ‘transitioning’ with all that entails? Not an easy station for a parent whichever it be. I’ve two nephews who are gay only one of ’em really gay imho…t’other merely lazy.

Hi Jeananne,
She’s living as a man, has changed her name, is taking testosterone daily and is saving up for top surgery.
She told me when she was 27. I’ve known since she was a teenager that she was lesbian but in hindsight I wonder if she was living as her alter for many years before telling me. She always had attractive, seemingly ‘straight’ girlfriends. One of them had 2 young boys. They have all went onto have heterosexual relationships again after they split up with my daughter. I did find it peculiar at the time but never for a second thought she thought she was trans. (I wonder now if they were attracted to her ‘male side’).
At her best friends wedding around 7 years ago, she was his witness and went dressed in a three piece suit. I didn’t think anything much of it then because she had never been a girly dresser, spending the majority of her time on the golf course in baseball caps etc but looking back I wonder if she was living the persona then.
I never saw her the stereotypical butch lesbian either.
It’s very strange and I’ll probably never quite understand it fully because the subject isn’t up for discussion with her and it’s her life to live at the end of the day.
The main thing for me to do is let her know that I’m always here for her.
If it all falls apart at the seams I hope she realises she can come to me then too because I’ll never judge her for her choices

Last edited 28 days ago by Vikki
0