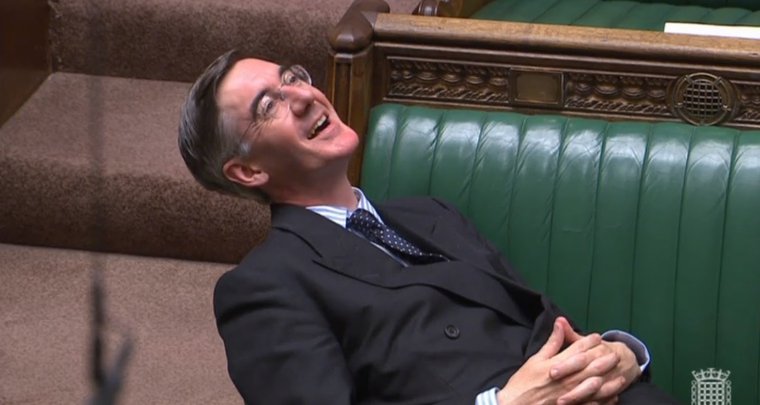 Jacob Rees-Mogg has called for a debate on the use of fixed penalty notices (FPN’s) arguing that they go against British tradition. The Brexit Opportunities Minister said that FPN’s assume a person is guilty until they prove their innocence.

A fixed penalty notice (FPN) is an alternative to prosecution at a magistrate’s court and is often applied for parking and speeding behaviour offences, as well as being used for antisocial behaviour and breaches of Covid rules during the pandemic.

Rishi Sunak, the Chancellor, and Mr Johnson both received £50 FPN from the Metropolitan Police for breaches of coronavirus restrictions last month.

There is no legal requirement to interview a suspect before a decision is made to issue an FPN, but police are still obliged to give a suspect the opportunity to answer allegations against them.

Mr Rees-Mogg, the minister for Brexit opportunities, told the Sun: “If we go back to the 1980s, when fixed penalty notices were debated at the time, there was an argument made in the House of Commons that they reverse the traditional British burden of proof argument.

“That you are guilty until proven innocent because you have to go to court to get it set aside.

“I think you always need to look at how things have worked when they’ve been going for some decades to see whether the intended consequences are what was expected.”

Speaking to the Sun newspaper, Mr Rees-Mogg added FPNs “assume you’re guilty until you prove your innocence” and described this as “problematic if you’re the constitutional balance”.

Accepting the system was widely deemed “proportionate” for low-level offences, he asked: “Is it possible [that] society will want to reopen that? Yes, it is.”

The options available to anyone who receives an FPN are to either pay it in full – as both Mr Johnson and Mr Sunak did – or challenge it at a magistrate’s court.

But an unsuccessful challenge can result in a criminal record and the obligation to pay any unlimited fine issued by a court.

A total of 124,626 FPNs were given out during the pandemic for offences including hosting an illegal gathering and refusing to wear a face mask, data showed in March.

More than 40 per cent fines are still thought not to have been paid, with Mr Johnson’s fine leading to calls for a wider amnesty.

FPN’s are a massive scam. Councils use them to defraud the public out of hundreds of millions of pounds a year.  They pay private firms to go about fining people for all manner of misdemeanours. It’s racketeering.

However, I’d rather Rees-Mogg focused his attention on the unprecedented assault on civil liberties during the scamdemic.

He should be working to introduce legislation that would make it illegal for any government, ever, to lock down society and order people to remain in their homes.

But…but…what is “British tradition” other than an expression of racist colonialism? Surely it is time to replace it with somebody else’s tradition? [sarcasm, for the literalist reader]

It would indeed be better if Mogg and the rest of them, brought up the topic of the destruction of our whole way of life over the last two years. This unprecedented assault on civil liberties as Richie puts it.

But this trend toward guilty until proven innocent, presumed guilt, and a drive toward less jury trials is all a worrying element of this increasingly fascistic society we are now living in.

Regarding ‘Party Gate’ many of us have been saying that the real story behind this is being ignored. Richie highlighted this a few months ago, and above is an article i read recently which echoes what Richie and others have said. We should not be concerned about how they broke the rules. The real question is why they broke the rules.? This is a question that the media and most of the general public are deliberately choosing to ignore, whilst they continue to bury their heads in the sand and take the blue pill. Anything to avoid facing the fact , that those in positions of power ignored the rules, because they knew there was no threat of dyeing from covid. This was just a perceived threat, that they wanted to instill in the publics consciousness, in order to push their agenda.

The only people who would argue with that won’t come anywhere near here to do so but I won’t argue with it. If the scamdemic was as bad as they made out, why where they putting themselves and their entire families at risk? They obviously knew that they where not and it was just the flu like any other year.

Hi Nev, thanks for reply.

Jurying yesterdays Sunday morning melodies which i really enjoyed listening to. The Eurovision song contest was discussed. It was good to hear the Irish entrants that Richie played, and below is the link to the last UK winner from 25 years ago which iv just listened to.

There was some talk over whether the votes were rigged or not in order to allow Ukraine to win. Though the same argument could be had over the last 20 years at least, as the voting has long been totally political in nature. Though i suspect the truth regarding vote rigging is rather more worrying, in that people really are voting the way it would appear. Showing how shallow and easily influenced they have become. Iv seen this over recent years with shows like Britain’s got talent. Those that put money on Ukraine winning the Eurovision, should maybe think about putting money on the NHS Choir, ( revoltingly calling themselves ‘the front line choir’ ) winning this years BGT show.

I enjoyed the Eurovision for many years ever since childhood sitting watching it with my family. Yes some of the songs were terrible, but others we really enjoyed. Back then people voted on how much they enjoyed the song. Over the years i saw a change from voting on the song, to voting for purely political reasons. I think Ukraine winning this year is probably just an extension of that. A sad indicator of how gullible the public have been with the vilification of Russia and the glorification of Ukraine. When the truth is, most country’s including these two are now equally as bad as each other. All controlled by the same forces behind the curtain.

‘He should be working to introduce legislation that would make it illegal for any government, ever, to lock down society and order people to remain in their homes.’

We all know that that matter is well and truly out of Rees-Mogg’s hands. However, by addressing the matter of FPNs (the threat of which would have kept a great many people indoors even if they knew no legislation had been passed to enforce the measures), it could be that he is coming at the matter from a different angle.

Not that it will matter. With the introduction of digital currencies and social credit systems, FPNs will become irrelevant. And with tracking software, guilt (or its lack) will be easy to determine.
And, it could be argued, once all that tech stuff is in place and legal, non-compliance itself becomes an admonition of guilt.

We use all sorts of words to describe this: Orwellian; Fascist; Nazi; Communist, to name a few. But go and have a look on Wikipedia (I know, I know) at how the Church – especially the Catholic church – governed during the medieval period and you’ll see the same things (just with different words).

A few months back, on this site, someone told me that not everything is to do with religion. That person could well be correct, but I think that is exactly what is happening beneath layers of distraction, misdirection, and new words: a return to religious laws and an old social order, enforced with new technology.

It’s just an attempt to keep people occupied with the stupid minor details rather than the real issues, they’re taking the piss, fifty quid fine for Johnson and Sunak? fuck me, that’ll affect the bastards not one bit.