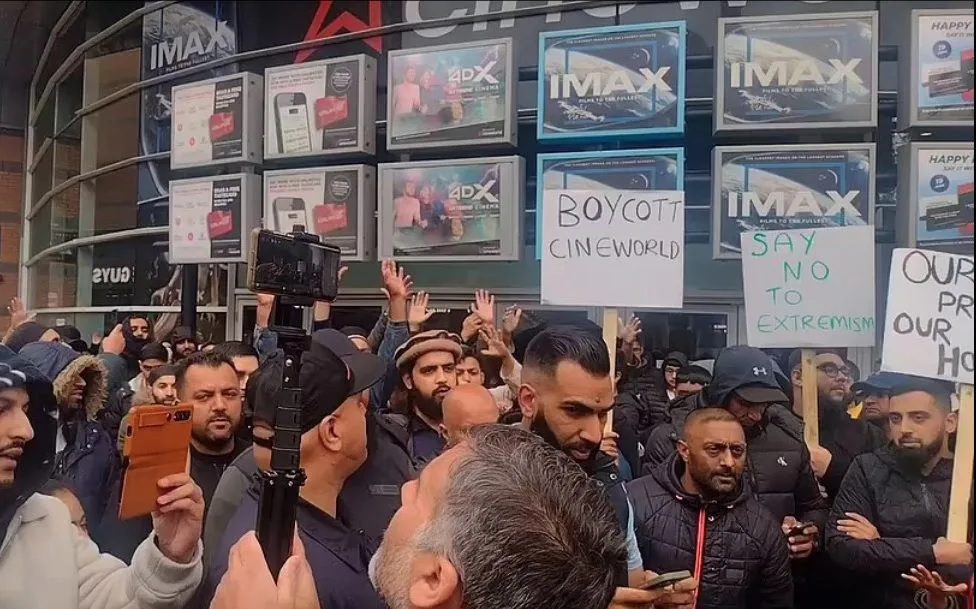 Adviser Tells Government To Stand Up To Religious Mobs

A government adviser has said that appeasing religious mobs will undermine social cohesion.

Dame Sara Khan criticised the government for failing to intervene after protesters caused Cineworld to cancel all UK screenings of a film about the Prophet Mohammed’s daughter.

Dame Sara said it would be easy to criticise Cineworld when questions should be asked about “what support and help did they receive from local and central government, their local MPs and even the police”.

Cineworld said it had pulled The Lady of Heaven “to ensure the safety of our staff and customers”. More than 120,000 people signed a petition opposing its screening, while the Bolton Council of Mosques called the film “blasphemous”.

Dame Sara warned that failing to stand up to the protests was a “dangerous slippery slope” that would mean anybody offended by anything could potentially try to shut down all kinds of lawful activities through the use of “intimidation and fear”.

Citing previous cases where a teacher and playwright had been silenced by bullying, she said: “Over the years, leadership from local MPs, local authorities and central government in standing up and firmly defending our democratic values has unfortunately been lacking.

“I have seen how local authorities and MPs have tried to appease religious mobs or sit on the fence, so to speak, in the hope that such protests will disperse – and often they have, in the short-term.

“But this is a failure of leadership and, in the long-term, has only galvanised religious fundamentalists, who now know that by engaging in such behaviour their unreasonable demands will be met.

“And in the long-term, all this will do will undermine social cohesion in our country and result in a gradual erosion of our democratic values and principles.”

It’s interesting that what isn’t really discussed is that the film was made by Shiite muslims, and that it is Sunni muslims who are protesting.

“Blessed are the cheese-makers.”

Funny how a group of protestors can stop the screenings of a “topical” film, yet they couldn’t give a toss about the vaccine/toxlc filth that they allowed to be administered in places of worship. I can attest to that fact as it was opposite a sheriff court that a place of worship was being used as a Jabattoir in an area I frequent. Another shining example of religious mania used to benefit the ever-present communist movement (Great Reset) throughout the western world. Such methods used are as follows in order.

Still waiting on the Prince <deleted> foot fetish and massage videos that are allegedly on file at an intelligence service HQ’s safe.

I do find party political broadcasts for the mainstream parties exceptionally insulting, vomit inducing and offensive to the intelligence of anyone with the ability to think critically and have the capacity to remember facts from several years.

But I find that simply changing the channel or even turning the TV off resolves this.

As well as crap brain damaging TV shows such as Poop Idol, Britain Had Talent, Teletubbies (WTF is that?), I’m a celeb-retard narcissist that needs public attention, sportsball coverage which I wouldn’t watch if my life depended on it, but I would never deny anyone the right to watch such material.

But seriously who has the right to decide what I or anyone can watch (or listen to) even if it is based on a political or religious figure? Do the powers that be consider that we are psychologically immature and emotionally fragile that our small minds can’t cope.

Nah, this is just another facet of the global communist / tyranny to continually demoralise, restrict, repress and give the state another reason to infantilize the masses via social engineering.

She accused them of “grooming children” politically which is utter lies. You can’t join PA until your 18 & if your under 18 & wish to come to one of Mark colletts events you need a signed parents permission & you have to come with an adult.

Compare this with labour & the conservatives where you can join at 14.

Sara Khan also said that she wants to change the law to make patriotic alternatives legal activities illegal because under the current law what PA are doing is legal within the current law.

So I have NO time for this woman who is daughter of a Pakistani migrant. She should have no say in what we can do in our own country.

For years now we have seen political ideologues getting away with cancelling, intimidating, and threatening anyone that they don’t agree with.
Is it any surprise that religious ideologues would likewise feel empowered to do so?

The basic notions of blasphemy and heresy seem to be once again worming their way into so many aspects of our lives, and anyone who knows anything about history should know the danger in that.

A piedfort is double the thickness of a standard coin Richie. Pronounced Pee, air, fort

Banning films on the basis that they cause offence, to me is clearly wrong. As is the banning of books and censorship of so called misinformation the last two years.

Personally i dont know anything about Mohamed’s daughter. However this reminds me of the film about Mary Madeline, examining the possibility that she had a relationship with Christ. As its a subject matter that I’m very interested in, i looked forward to the film. Only to be disappointed at how pretentious and boring i found it. It seemed that the film was just being used as a vehicle to promote cinematography and political agendas.

Who knows if this film will be any better. But i would like to have the right to find out for myself.

We have “democratic values and principles”? After the last few years I’d love to know where they are hiding.

Depends on the perspective of ‘democracy’. The people vote for the politicians who will govern them, and the people have been governed.
Democracy is also about majority will, and the majority, for a variety of reasons, have chosen to embrace the ‘vaccines’.

From those perspectives, the values and principles of democracy have been working just fine.