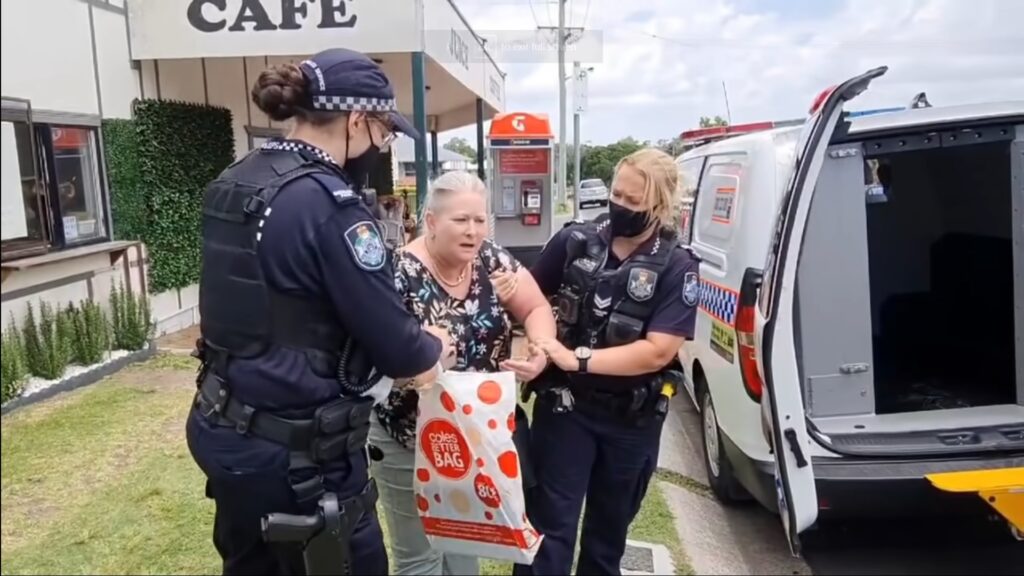 This is what totalitarianism looks like. This is what a police state looks like. A 46 year-old woman was dragged out of a café in Queensland Australia by five police officers yesterday, because she didn’t comply with their order of Ihre papiere bitte.

The woman, named as Rebecca, was in a café at Dayman’s General Store in Hervey Bay Queensland. She was having a coffee at a table outside, when police turned up and demanded to see everyone’s vaccine passports.

Rebecca refused. She told the police that she would supply them with her name and address but would not show them her medical records. She was arrested, taken to a local police station and fined $1.300.

Matt (the owner of the café) said the cafe thought it was their responsibility to provide options for unvaccinated locals as well as the vaccinated, so they decided to open up their garden with socially distanced tables and QR codes to ensure people could be tracked.

‘People can go to food courts and sit side by side, we thought if we opened our garden area, it’d be OK,’ the cafe owner said.
‘We did a video saying we welcome all of the community, a few days later, on Christmas Eve, three police arrived in their paddy wagon saying we were providing false information and that unvaccinated people can’t even sit in the garden.

Queensland Health told Daily Mail Australia that because the garden is attached to the venue, all patrons must be vaccinated, as they must also be in food courts.

‘Restricted businesses have a higher risk of transmission, where there are people at higher risk if they contract COVID-19, or settings where contact tracing can be difficult,’ a spokeswoman said.

Kudos to the cameraman for calling the officers “filth” for that’s all they are. A pox on all of them.

Richie Allen is the host of The Richie Allen Radio show, Europe's most listened to independent radio show and is a passionate supporter of free speech. He lives in Salford with the future Mrs Allen and their two dogs.
All Posts
5 2 votes
Article Rating
Login
Please login to comment
15 Comments
Inline Feedbacks
View all comments

The definition of a highly dangerous criminal in 2021, a lady having a coffee. These ‘Police’ are total scumbags, the Police are there to protect the people, NOT to serve the agenda.

Just the optics of a White middle aged woman manhandled into a paddy wagon – shows how far my country has fallen. She looks like someone’s mum, I wouldn’t say Aussies aren’t aware or standing up – enough are , 20-30% is enough. The powers know this – hence the overblown police presence to arrest a woman, they are all there to protect each other – shows they are anticipating push back . And why wouldn’t they. I have a theory of ‘why Australia?’ – we have, in the individual states ( which have become seperate serfdoms now ) small populations and an advanced medical system – doesn’t take long to jab 4/5/6 Million – it just takes logistically longer when you get to European numbers 60 mill in UK for example – hence the success in Scotland and Ireland for example. So the naysayers are a larger mass and the powers don’t have the bulk resources- people/logistics/ physical clout to pull it off in a timeframe that allot of fence sitters start to catch on.
The time they forced – and that is the correct description – millions in my State – Victoria was quite impressive, if a larger population- say 15 million instead of 6.7 the momentum would have slowed down + having say 500 k refuseniks here as opposed to 2 million also makes a huge difference. I lived in the UK for many years and more than aware of what population mass does to how a society is managed.
On an update here in Victoria it’s an absolute shit show – a huge pingdemic has caused massive supply problems, large swathes of the population isolating because that’s how we are swinging with this. A massive mess, it will get allot worse very soon unfortunately, the damage to the economy alone will start to show. And we are in the middle of summer here, sheer lunacy!

I’m in heavily vaccinated Ireland and what you say makes a lot of sense. So sad about your country which used to be the epitome of freedom. We have to hold our nerve and not give in.

If I was a policeman I would just ignore whatever I was told and just walk the streets and mind my own business. Sure I would have asshole colleagues who want to play Robocop and complain about me for not wanting to ask people to show me they fricking phone covid ID. But let’s be real police can stick two fingers up to the establishment and just leave people alone but these people are braindead programmed sheep who quote ‘just following orders’.

That tall prick copper with no hair is in desperate need of a good beating as for the rest of the scum just kick their heads in.

So the police now only see their job as supporting tyrannical governments not the people. Australian politicians have made themselves rich by selling off water and mineral rights to the Chinese which they had no right to sell. Were any of them arrested? Did the police do anything about it? We know the answer to that. This is disgusting behaviour and those who arrested this woman for the heinous crime of having a cup of coffee should be deeply ashamed.

The job of the police is to uphold the law – whatever that law is.
When they don’t do this – when individual officers choose to interpret law as they see fit, or outright ignore it – we are often very quick to cry ‘corruption’.

That’s just an observation and in no way condones this behaviour. I just thought it needed to be said.

This is the very definition of what Totalitarianism is. And yet if you pointed this out to most people, they will still justify these things on health grounds. Ignoring the fact that even if this plague was real, fascism is fascism and should never be justified. I still shake my head every day at how this assault on humanity, that has broken cover over the last two years has been normalized. But why has Australia been particularly hard and brutal in its enforcement of covid policy’s. Likewise China, Israel and Ireland, what makes them different.?

Well to the Cabal / Cult behind this whole agenda there is no difference. As there are no borders or country’s. I believe as David Icke does that china today is what’s planned for the rest of the world tomorrow. It is the blueprint for what’s planned everywhere, including the social credit system. For decades they have been building Orwell’s nightmare of a police state. And putting the surveillance in place to carry that out. And unlike the western world they have had no need to do things by stealth. The reason things have moved at different speeds in different country’s, in rolling out the master plan, is a mixture of strategy and compliance. Israel like china was an easy target, due to an extent what was already in place, and because of the cabals extremely strong influence in that country because of the Sabbatians.

Its interesting that Australia has a very low level of serious cases of flue and respiratory illnesses in a normal year. Which is why they have had very low covid cases. In fact in 2020, the total deaths from respiratory illnesses, was almost identical to the previous year. This may account for why pre covid, they were attacking people on benefits who refused to have there children vaccinated. And why from the very beginning of the covid scam, they have been unrelenting in the kind of behavior that Richie writes about, and even worse that has been previously seen. How else were they going to push the poison fake vaccine on the Australian public. When they knew that it was never going to be an easy sell.

I think it unfair that some have said Australia is as bad as it has been, because of lack of push back. On the contrary i think that the reasons already mentioned, and the Australian peoples spirit. Led the puppet masters behind this global tyranny, to make the decision to come down hard on Australia from day one. The same spirit that is exemplified by the brave people in the video link above. Long may that spirit live, and the flame of resistance grow and spread to all corners of the world.

Disgusting shame on them.

Notice how the vans look more like stray dog transporters.

And the only real animals are the filth and scum of the earth inventing and enforcing this tyranny.

Shame on the lot of them.

Wondered if this scene was orchestrated by RABA ..royal academy of bad actors!!!

No there are people genuinely standing up to this, I do it myself.

I noticed this as well, why an earth is this police van smaller than usual. The poor lady had to practically duck down and squeeze herself through just to get into that ridiculous entrance. It does look like it’s designed more for stray dogs, animals more than humans, like they want to add even more distress to this poor woman. It made me think of the cramped windowless trains they used to transport Jewish people to the death camps. Herding up humans like animals.

I would suggest that the arrest in this instance was genuine, but they are exploiting these incidents to promote propaganda and fear, so from this perspective, there’s elements of theatre occurring here too… (Hence the animal transporters!)

It will come to our shores soon enough if the masses do not wake up.

The key to understanding all of this is recognising the psychological manipulation being orchestrated by the legacy media.

Get the mind washed to detach themselves from the hypnobox and/or the hypnoradio..

Then there’s a chance of breaking this feed back loop.