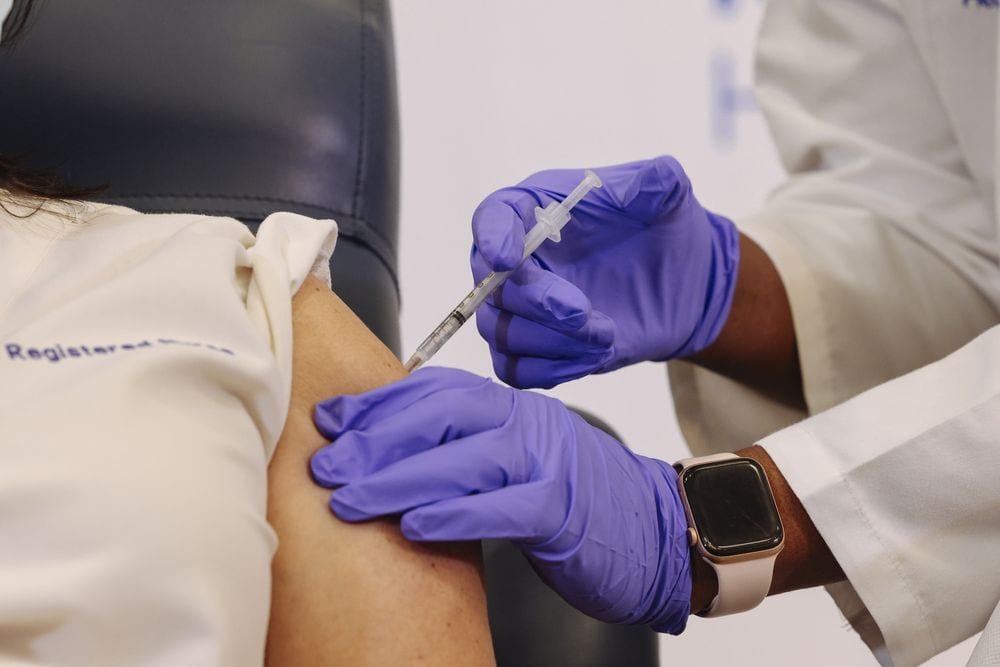 An elderly man collapsed and died just 25 minutes after receiving a Covid-19 vaccination in New York City on Sunday morning. The man who was in his seventies, fell as he left Manhattan’s Jacob Javits Convention Center shortly after receiving the jab. New York State Health Commissioner Dr. Howard Zucker said that:

“Initial indications are that the man did not have any allergic reaction to the vaccine.”

First responders assisted the man, who has yet to be named, but he died a short time later in hospital. An investigation is now underway. In New York, those who receive the vaccine are subject to a mandatory fifteen minute waiting period, in case there’s a reaction to the jab. Zucker told reporters that the man seemed fine and was cleared to leave the building. It’s not known which Covid vaccine he received. 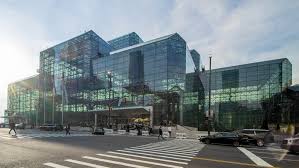 Zucker told journalists that he believes the vaccine is safe, and that “together with continued vigilance including wearing a mask and social distancing, it will bring an end to this pandemic.”

How can Zucker possibly know that the vaccine is safe though? Is he a clairvoyant? Absent an autopsy, how can he rule out that the man had an allergic reaction? He doesn’t know.

On Saturday, Drene Keyes, a  a 58 year-old Virginia woman, died shortly after receiving the Pfizer vaccine. Her daughter said that her mother started vomiting, had trouble breathing and then died hours later. Incredibly, officials in Virginia have said that the vaccine isn’t to blame. Again, how could they possibly know?

Dr. Vernon Coleman, over at http://www.vernoncoleman.com has been meticulously documenting reports of adverse events and deaths. They are mounting. I will not be having any of these vaccines and I have urged my family and closest friends not to have them either.

Richie Allen is the host of The Richie Allen Radio show, Europe's most listened to independent radio show and is a passionate supporter of free speech. He lives in Salford with the future Mrs Allen and their two dogs.
All Posts
4.4 7 votes
Article Rating
Subscribe
Login
Please login to comment
28 Comments
Inline Feedbacks
View all comments

Please note that this is an abridged version of some of the points covered in the phone call which is discussed below.

I got the “vaccine” appointment letter (THE LETTER NOT THE VACCINE) from the NHS on Thursday 18th March 2020 stating that my jab was for the 22nd of March at one of the temporary Nightingale hospitals. (Unsure if there is a discotheque built in them) There was a phone number to reschedule which I phoned on the Friday and stated to whomever that I would not be taking the vaccine at all on the grounds that it was untested as well as many other reasons. I even stated to that person, “Why do we need a vaccine, when safe, cheap and thoroughly tested treatments exist, such as Hydroxychloroquin with Zinc, Ivermectin, Dexamethasone, Azithromycine etc?”

Also pointed out that the survival rate for covid19 was 99.9% (my age bracket – cynical to distrusting of the legacymedia) yet the adverse reaction rate for the “vaccine” was quoted as 2.79% not including death which I’m sure the manufacturers will rename as expiry by natural causes.
These vaccines were experimental thus they could not call them vaccines but gene therapies that the LONG-TERM health problems have not been fully established.
I even asked that person if he/she would be taking the “vaccine” and that person said that they can not discuss it. (I’m suspecting that the person wouldn’t be taking it.) Notice the irony that you are having a conversation concerning vaccine safety and that person can’t answer that question.

Additionally, I implored to the person that he/she should do at least five minutes research and recommended people and topics such as Dr Vernon Coleman, Wolfgang Wodard, The Great Barrington Declaration, (that place that MSM shall not name namely SWEDEN) the BBG Richie Allen, the UK column, Spiros Skouras or anyone that has been banned from Youtube or de-platformed or silenced for doing actual journalism.
The person put me on an opt out list and stated that I would not receive further correspondence regarding that.

I would guess that people opting out of the “vaccine” programme is an issue that the government and MSM don’t want to discuss or acknowledge as I do not believe the latest figures that are plastered over the marquees, banners and ticker tape scrolls of Sky, BBC and STV are extremely over inflated by many millions to say the least.

But what do I know? I’m labelled a conspiracy theorist for having a different view or an alternate opinion but over the many years I am used to such knee jerk reactions from those that are unable to use critical thinking or any form of mental process that does not side with the state approved narrative(s).

Upside down world can be remedied by loving God with your whole heart soul and strength. Dont be half assed, half witted or limp dicked.

Vaccine means harm, people need to read up the history of western medicine and of inoculation, read about epidemics. And best on neutral websites, which excludes wiki because they are biased. Read about germ and terrain theory, Pasteur vs Bechaump, only Pasteur would allow inoculation as “treatment”, Bechaump does not allow such.

Thing is majority does not have the time to read all this, they use preformed narratives by massmedia, western medicine etc…gobbling up any propaganda used for greater profits.

Probably The Source, saying, “No, sweetie, not for you…” Otherwise, you get the hell of being a gmo human, right…? Just a thought. Peace and love to all of you.

Yesterday, I was trying to be friendly to a taxi driver and was telling he that I was concerned about my elderly mother having the vaccine because I didn’t think they were proven safe for the elderly; she said that ‘people like you are making the virus spread’. I told her the vaccine doesn’t stop it spreading but she accused me of reading ‘fake news’. She was caustic. When she gave me my change she informed me that she had disinfected it.

People are getting more entrenched in their views. I found it distressing also because my family have been asking if my mother has had the vaccine. I hadn’t been out for weeks and the masks have increased everywhere, including cyclists; taxi drivers; bus drivers and people walking about in the open. There is increasing intolerance to any kind of dissent. I will be careful who I talk to; if they haven’t woken up to anything by now they never will.

I suspect the psychologists and psychiatrists on the government advisory teams are monitoring this autocratic mindset closely….

And doing every bleedin’ thing they can to increase the uniformity. Totalitarianism doesn’t come by government decree. It comes by popular compliance.

Makes you wonder, did they know through antisocial media that now was the proper time to pounce? Monitored enough and judged, “yeah, people are dumb enough now, let’s go for it.” In America, Florida, specifically, it’s a bit better, for now, almost everyone wearing one, not i nor my wee ones, never have, but people wearing them incorrectly a lot, not wearing them in “quickie marts.” Went to the hospital the other day so doc would prescribe my son his meds he’s been on for 6 years (he has hemophilia). Anyway, he and i, literally the only ones not wearing one in an 8 floor hospital. They sent me a survey, upon which i was very honest. Best to you and yours, dear.

I feel your pain. It’s like we have to be very careful of what we say in case we hurt their little brains but they can talk absolute tripe.

Gives a wholly new, existential meaning to: ‘move along. There’s nothing to see here.’

(N.B. I’m not making light of the poor man’s death. It’s a crime against humanity.)

Celebs who have the jab publicly would a good service if it happened to them, it would save lives

But it won’t happen to them…….I wonder why?

Didn’t realise that death was not an allergic reaction.

I’ve seen probably about a dozen people on FB announcing they’ve had their vax…..and then umpteen comments from friends and family saying “congratulations” “well done you” and “can’t wait to have mine”, It’s absolutely mind boggling how brainwashed people have become.

Even when you show stories like this one, people just blank you or tell you it’s a one-off.

I just want to reach through my PC and slap each and every one of them.

Agree with you.
At least there is still some common sense left.

Yea, and the country is held out to the world as some 3rd world slum. Sounds much more civilised than ‘take the job or lose your job’.

Some people can not accept reality, the majority are still thinking that things will go back to normal soon. It is not planned to!

Someone I know thanked Boris on their Faceache page……..we’re doomed!

Err the guy was ok before he went in for the lethal injection ..

Our Operating System
Recognizing the broad potential of mRNA science, we set out to create an mRNA technology platform that functions very much like an operating system on a computer. It is designed so that it can plug and play interchangeably with different programs. In our case, the “program” or “app” is our mRNA drug – the unique mRNA sequence that codes for a protein.

what could possibly go wrong?! Trust the “science”.

first jab… second jab… booster … monthly update patches … connected to cloud hive mind is good for ya. No need to carry a cell phone in your pocket.
Get instant updates directly to your brain (or whatever is left of it)

not toxicinated yet?
we’re al in this together.
YOU – have our OS injected in your ass, “WE” – run the OS …for your safety of course

DNA Codes Under Attack: The Vaccine Agenda.
Dr Downing’s FACTUAL RESEARCH will reveal how your DNA Codes are under attack and why and how you need to defend them.
https://m.youtube.com/watch?v=L1SkVZvjUyQ

Because they have indemnification
They don’t have to say it’s got anything to do with the vaccine.
They are not liable for any idiot who takes it.
All they see is $$$$$$$

Just another coincidence, nothing to worry about.
Genetic ToxCine is safe cuz gubberment says so!

Ya’ gotta be a *Sucker* to believe this Zucker.
Yeah.
It’s inverted reality, 1984-Orwellian Newspeak.

As always the Truth is 1984-exact opposite of what the msm spits out.

I actually am a clairvoyant, and I know 100 percent these vaccines aren’t safe….