Nearly two-thirds of ‘child’ refugees who were questioned about their real age after coming to Britain were found to be adults, an official report has found. In a 12 month period, 65 per cent of asylum seekers who had claimed to be minors, were in fact found to be over 18. The report by the immigration watchdog David Bolt, revealed that the Home Office received just under 3,000 asylum applications from unaccompanied children in the year to June last year. There were 705 age disputes (around 25 % of the total) where it was believed that the person was lying about his/her age. Of these, 618 cases were resolved and 402 (65 per cent) were found to be adults.

Campaigners who had screamed bloody murder about this and expressed fears that radicalised young men were entering the country this way, will feel somewhat vindicated I would imagine. 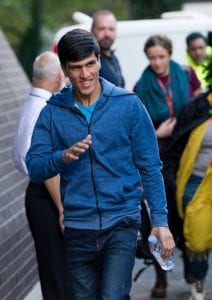 They were written off as xenophobes and bigots weren't they? Maybe some of them are. Some people hate for no reason at all, tis true. But these figures are alarming. By the way I am NOT suggesting that every refugee who has lied about his/her age is a terrorist! But what if even a handful of them are? Western backed Wahhabi headchoppers have turned parts of the Middle East into utter hell-holes. People are understandably fleeing for their lives, God love them. The very least we can do after helping to destroy their homes, murder their families and ruin their lives is to help them get back on their feet right? Right. No rational person would disagree with that. But what if, among the hordes of the truly desperate, you have a jihadi element? What if this mass exodus contains young men, who are not of the ISIS mindset at all, but have revenge on their minds? If I was Syrian or Libyan even, I might just want to give Western civilisation a little taste of what I had been subjected to. Of course I am not saying I agree with that, violence begets violence etc. but I can understand it. And when a radicalised Muslim or a poor bloke driven mad by grief, blows up a concert, or drives a car into a crowd, the government has the ready made solution, which is to erode more and more of our civil liberties.

As I have been saying for years on the radio shows, this is all part of a wider plan, but it's nigh on impossible to get folk to consider it because it is so utterly wicked. People still prefer to believe that these nightmares are the result of bad foreign policy decisions or poor planning. Bollox, you can't keep trotting out that tired old garbage. They know exactly what they are doing. They want to flood Europe with millions of traumatised and bewildered victims of the chaos they themselves created, to bring about the inevitable collapse of those countries and the permanent death of sovereignty. They know full well that we will splinter off into identity groups, you know, progressives v conservatives, becoming increasingly more hostile (and ultimately violent) to one another while they rub their hands gleefully and move onto the next country that they have targeted for destruction. These people are psychotic. If they were genuinely committed to keeping us safe, they would never allow so many adult refugees posing as children to enter the country. But then again of course, they  wouldn't be funding, arming and training nutters in Syria either would they?

richieallen.co.uk
Previous Neocon-Zionist Puppet Donald Trump Is Pushing The World To The Brink Of WWIII Next May To Launch Airstrikes On Syria Without Approval From Parliament.