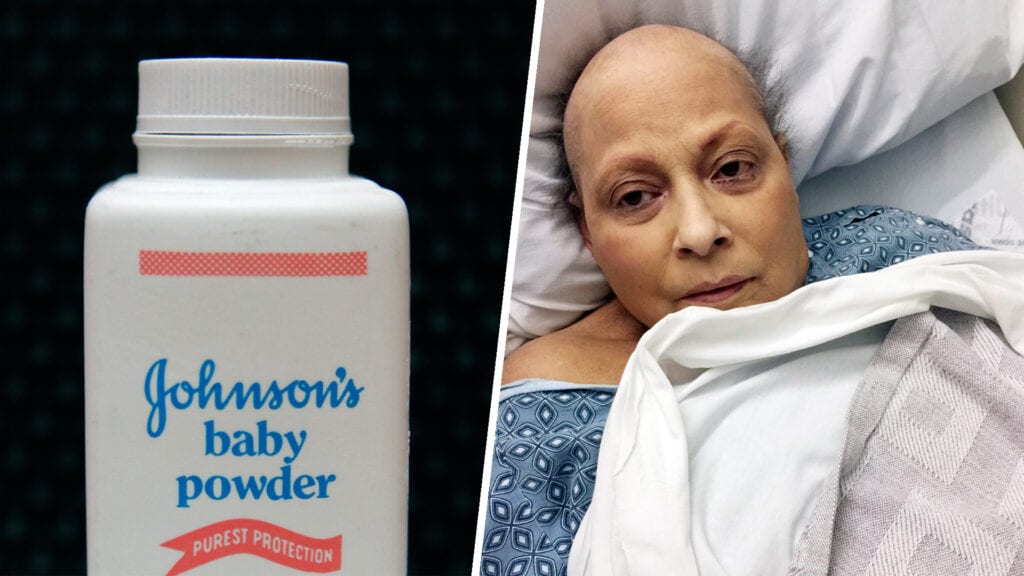 South African President To Receive Vaccine To Boost Confidence. Is He Mad?

South Africa’s President Cyril Ramaphosa said this morning that he will receive a coronavirus vaccine, to demonstrate it’s safety and efficacy. The president Tweeted:

“The Johnson & Johnson vaccine has been shown in extensive trials to be safe and efficacious and will protect our health care workers from illness and death from COVID-19. To demonstrate our confidence in this vaccine and help allay any fears that people may have, the Minister of Health and I will join the first health care workers to receive the vaccine in Khayelitsha.”

Three years ago, a US court ordered J&J to pay $4.7 billion to 22 women who claimed that the companies talcum powder gave them ovarian cancer. A class action against the company was made up of nearly 10,000 plaintiffs. Talc is a mineral. It is mined. It is often located in close proximity to asbestos. J&J knew as far back as the 1970’s that its powder was contaminated. The company was fully aware and sold it anyway, knowing that it would be used on babies. Think about that.

Pharmaceutical corporations are among the most evil entities on Planet Earth. J&J isn’t alone. All of the Covid vaccines, have been rushed out by corporations that have had to pay out tens of billions of dollars in damages and fines over the years. All of them. So why then, did our governments grant these charlatans immunity from prosecution in the event their Covid vaccines caused harm?

The answer is obvious. The vaccines will cause harm. It’s happening already, as we know. If South African President Ramaphosa is really going to take the Johnson & Johnson jab, he should have his head examined. He says he is doing it to “boost confidence” in the jab. In reality, South African’s will have to take his word for it. I’m not sure that I would.

Oh, by the way, back in August, the UK ordered 30 million doses of the Johnson & Johnson vaccine ahead of its approval by the regulator. What times we live in.

Richie Allen is the host of The Richie Allen Radio show, Europe's most listened to independent radio show and is a passionate supporter of free speech. He lives in Salford with the future Mrs Allen and their two dogs.
All Posts
5 7 votes
Article Rating
Subscribe
Login
Please login to comment
14 Comments
Inline Feedbacks
View all comments

These people are psychopaths of the highest order. Sometimes I wonder are they even humans? How can anyone in their right state of mind sell a product such as contaminated/dangerous talcum powder to customers knowing it too well to be unsafe when used on babies. What has a baby ever done to them? Makes me sick.

Why are they targetting the little ones the most? There’s something seriously not right in this world.

Bad effects from these vaccines will not necessarily show up immediately that’s the point. This is why they need years of testing and even then they can still cause harm, look at the Gardasil vaccine.

If the likes of J&J are not even able to make safe a product that has been in existence since the 19th century, then how can we trust an experimental vaccine that has been rushed into production in a matter of months, without any studies on its long term safety and effectiveness?

Also, if J&J knew what they knew about the contamination of talcum powder as far back as the 1970’s, it certainly makes you wonder what they know about the vaccine, that they’re not telling the public.

He is not taking any vax. Just a show to get people to take it. Don’t believe this. These people in power are puppets to dumb down/ trick people. To take a vax- for what? Something that has not been isolated. More fakery.

It’s a trick of terminology. They will say in scientific journals they have found ‘isolates’ and that is very different to ‘isolating’ an entire virus. Which, by the way, they have never done ever, with any virus. They have yet to ‘isolate’ the hiv virus which was from the 80’s till now. Jon Rappaport wrote an entire book on the subject called AIDS Inc. Look it up, then research terrain theory and its juxtaposition to germ theory and you will be challenged to reevaluate what all these “experts” are telling you. Do start at the beginning though, with Antoine Bechamp. (not sure on the spelling there) 👍🏻

great shout, also see what Kary Mullis said about hiv/aids very good, he also said of tony the fraud fauci ” any decent journalist could expose him for the fraud he is in 10 minutes “. 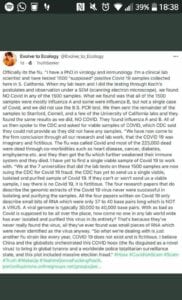 I got a link to this last week or the week before, one of the comments called the guy out and provided a link which led to a page on facebook, where the guy said it was sent to him but he could not verify if it was true or not, but thought it was worth putting up, the guy seemed honest and legit but as he said he had tried but could not get confirmation.

Just seen a video Max Igan has done, I think that document is true, the guy is on tape talking about it, says they have started legal work and are suing the cdc for fraud.

There have been requests under freedom of information acts in numerous countries asking for proof that the virus exists and they have not been able to provide any anywhere. Also the CDC itself said in a report unearthed by Last American Vagabond that they did not have any samples of the virus

Hi their, I’ve heard the explanation as why the proof of virus a scam. And don’t have to hand. And complicated.

But I can tell you with certainty the following.

1/ Something called Kochs postulates, we’re used to determine whether a virus existed, since the late 19th century.

2/ Shortly before the imaginary plague, the rules were changed. And they said this was no longer essential.

3/ They have come out with various reasons why they think a virus, including ” we found fragments and were able to extrapolate with computer modeling. “This has never been properly explained.

4/ They have admitted now that Kochs was not used. They originally lied about this.

5/ Most countries have received legal requests for proof of isolation. Most have ignored those requests. Some have said, we can’t provide as not in the country’s interest. And at least one. I think? It was sweeden. If not forgive me. But I have seen the document online. Came back with a court ruling,saying . That they regretted, that they were unable to provide legal evidence of covid being isolated anywhere ever.

And if that is not enough evidence of a hoax. The numbers now speak for themselves. All people have to do is look at the total deaths from all causes all around the world. For 2020 compared with previous years. I am personally 100% certain it never existed.

Jon rappaport, Tom cowan, Andrew kaufman to name a couple also Stefan lanka is quite interesting, in fact the whole germ or terrain theory debate is interesting, look into the study the U.S. military done on the Spanish flu ? epidemic of 1918 were they put infected and non infected together and not one of the healthy soldiers could get infected with the deadly flu ?, try Jons website http://www.nomorefakenews.com