The Thought Police Are Knocking On Doors & Warning People About Their FaceBook Posts!

Do you remember those old Iron Curtain horror stories we were told growing up? The ones about the Stasi and the KGB breaking down doors and dragging men kicking and screaming from their families, their crime being that they criticised the state? Remember them? It couldn't happen here right? We are free, we live in a democracy, we are the righteous ones. I wonder what Tony Boxford thinks about the country he lives in, after two police officers knocked on his door to have a "chat" about comments he made on FaceBook, about his former employers, Hadleigh Town Council? According to today's Daily Mail: 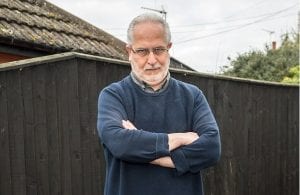 Mr Boxford was elected to Hadleigh Town Council in May 2015, but resigned four months later citing disputes with other members. In January, he wrote a blog criticising the council for delays in producing a neighbourhood plan and claimed a 'grievance panel' set up to discipline another councillor had no authority to do so. On Facebook, he criticised former Hadleigh mayor Richard Whiting for reportedly saying he stayed on in the role to 'support' new councillors when three had resigned during his tenure. In another post, he slammed the council for allegedly spending taxpayers' money on maintaining the town's guildhall, claiming the money was better spent on people. Police told Mr Boxford he had done 'nothing wrong' and was 'not in trouble' but that they needed to 'have a chat' with him about the online comments.

As he knew the officers, he let them in. They couldn't tell him what in fact they were doing there. Boxford told them to caution him, arrest him, or leave. They left. He shouldn't have let them in, whether he knew them or not. He should have told them to fuck off and he should have contacted his solicitor. This is an outrage. But it gets worse. When Suffolk Police were contacted by The Mail, they said:

'Concerns were raised with police that some comments had been made regarding a member of the town council which they believed to be derogatory in nature - this included posts on social media. 'Two individuals have subsequently been spoken to by officers and offered words of advice regarding these comments and in particular the appropriate use of social media.

What the fuck?!? They have absolutely no authority to speak to, let alone warn anyone about their conversations on social media, unless there has been a threat of violence. I mean really? Man criticises local authority policy, local authority phones the police and they send the stormtroopers in to "warn" him? I mean, if someone has been defamed or libelled, it is a civil matter and has nothing to do with the police! This story is buried in The Daily Mail today, but it is the most important story in today's papers believe me. This is how it begins, with just a friendly word of warning. Watch how quickly that progresses to "we'd like you to come down to the station please." And on the day when UK PM Theresa May is warning about politicians being harassed on social media and the need for new laws to protect them from an increasingly (justifiably) angry public too! Welcome to Planet Dystopia.