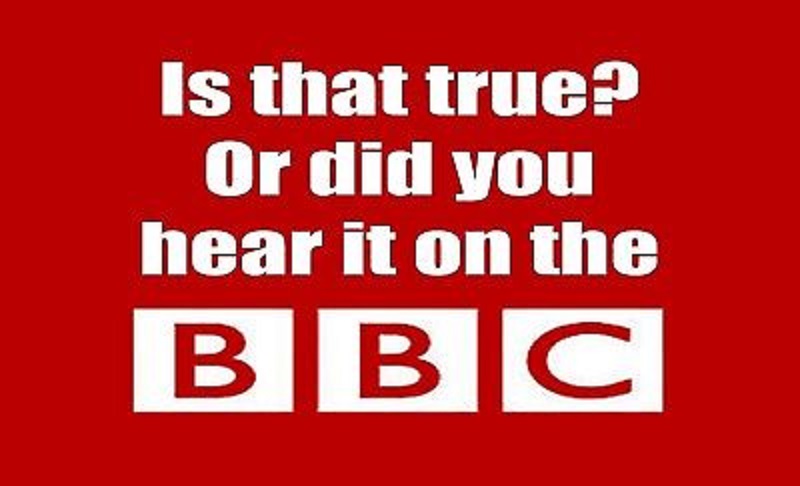 Former BBC editors have warned that the corporation’s younger journalists do not understand that their reporting should be impartial. A former head of BBC television news even claimed that younger staff are confusing impartiality with social justice.

According to The Telegraph today:

A generation that has grown up with social media believes that being impartial and saying what they think is right are the same things.

Giving evidence to a House of Lords committee, Roger Mosey, the former head of BBC Television News, said: “Some younger journalists don’t understand it in the way it was classically imbued into BBC journalists over the years.”

Richard Sambrook, former head of newsgathering at the corporation, is now a professor of journalism and said his students don’t see impartiality in the same way that older generations do.

“I talked to students about impartiality… and they may say, ‘Well, fairness is about social justice.’ You have to try to reframe the argument. With identity politics, they have a very different concept of what is right,” he said.

“We’re in a culture of calling things out. They are a generation who do not see it in quite the same way.”

Sarah Sands, the former editor of Radio 4’s Today programme, said the BBC’s culture of turning news presenters into celebrities could be a threat to impartiality.

I taught radio production at college level. If a student of mine had said to me that fairness is about social justice, I would have ripped him/her a new one.

Fairness is about ensuring that the listener/reader is presented with every side of the story/argument and left to form their own opinion.

In the present paradigm, that should mean that scientists who oppose lockdowns, vaccine mandates and vaccine passports are afforded equal time alongside government advisers.

In my MSM days, it would have been impossible for government scientists to come on the radio and advocate lockdowns, mask wearing and social distancing and not be challenged.

They would have been compelled to appear with doctors and academics who opposed them. Listeners would have never heard my opinion.

That was journalism. That was then. This is now.

Richie Allen is the host of The Richie Allen Radio show, Europe's most listened to independent radio show and is a passionate supporter of free speech. He lives in Salford with the future Mrs Allen and their two dogs.
All Posts
5 3 votes
Article Rating
Subscribe
Login
Please login to comment
30 Comments
Inline Feedbacks
View all comments

NOT The BCfm Politics Show presented by Tony Gosling.

I knew that they were lying about the numbers not getting the “Experimental Gene Therapy” treatments.
Does not sound to good that figure.
Good news much needed..

the state is trying to project the majority forcing the minority, 23 million people is far more than say 5 million, no wonder the state looks desperate if these figures are correct.

An advisory panel to the U.S. Food and Drug Administration voted to grant emergency authorization to Merck’s oral COVID-19 pill molnupiravir (Lagevrio) — but only by a narrow margin. The 13-to-10 vote speaks volumes about the panel’s confidence in the treatment, as do the numerous concerns regarding efficacy and safety voiced by the panel.

Merck reported in a press release in October 2021 that their antiviral drug led to a 50% risk reduction in hospitalization and death among COVID-19 patients. That was based on data from 386 patients, however. When the full analysis was released, which included data from 710 patients, the effectiveness declined significantly.

Among those who received the drug, the rate of all-cause hospitalization or death was 6.8%, compared to 9.7% in the placebo group — a relative risk reduction of just 30%. Several panelists reportedly said that the change in data was poorly explained, and it represents just one concern voiced by experts that raise major red flags about Merck’s COVID-19 pill.

Placebo Outperformed Drug in Second Half of Trial
In an addendum released November 22, 2021, the FDA stated that they became aware of the “topline safety and efficacy results from all 1,433 randomized participants. The data showed that patients taking the placebo fared better than those taking molnupiravir.

As noted in a commentary in the BMJ, “The full data showed more hospital admissions among patients taking molnupiravir (6.2%) than among those taking a placebo (4.7%) and led Merck to revise the benefit of preventing admission downwards to 30%…….

Sorry Gerry but I have proof these events are pure coincidence.

Dang it angelseal!!
I feared it would be debunked eventually!!!

Nothing to see here.. move along!!!

“Roll up, roll up, to the maddest, baddest, wildest, druggiest and most devil-tatted show on Earth!”

Thank you for clearing that up angelseal. I thought it must be coincidence because the alternative would be that the powers that be are lying to us, trying to take over everything and want to control us. As if that would ever happen.

It was in another lifetime,

Standing in the doorway,
Silver bangles in her hair,
Come in she said, I’ll give ya shelter from the storm.

Evening Fox.
I hope you are well

Same as usual Jake, not heard back from sister yet. I’m gonna chuck a hand grenade onto face book overnight. Not used in about 4 years, but gonna post the letter sent to sister to everyone i know on there. So no doubt it will hit the fan. What’s happening your end.?

All the best for your plans 👍🏼👍🏼
I just finished watching thehighwire.
Another xmas without getting out of London to see family sadly.
I am preparing incase there is another lockdown again so stocking up on supplies.
That about it really.
Catch you later Fox 😁

Just a heads up Richie, you said some of your podcast services are editing/censoring your shows.

I always download off your site’s front page from podomatic.

Yesterday’s show was only 1hr 16m long, and started in the middle of an interview with someone. Jfyi.

Morning Tony, Richie knows about it. His system crashed and the website went down as well. Also according to the search i did. Google chrome crashed at the same time and anything that was being listened to through the search engine.

always makes me laugh when the media is saying there was a “rebellion and backlash” over the vote on tues, when I heard people say this my response is, “yeah, such a rebellion the measures including jab passports and jabs for NHS staff went through anyway and the agenda goes forth” A backlash is when the agenda is stopped in its tracks and not agreed to.

The media is propping up the false pretense thsgthe country has not become a dictatorship.

That is why I beg to ask the question Richie. Did bbc get a piece of that 300 million dollar spent by Gates to buy out the media?

Old Billy boy Gates is listed as one of their donors
https://www.bbc.co.uk/mediaaction/about/funding

Billboard outside the paint shop today 🤣

I’m actually surprised that these former bosses had the balls to say this. Fair play to them, for what it’s worth.

This lack of proper journalism is yet another issue I can’t seem to get people I know to consider.

On a completely different note. On your show yesterday you were talking about simulation theory. There is a book from 1998 called The Fifth Interview of The Wingmakers. It’s really interesting. Says very similar things to what David talks of.

This website uses cookies to improve your experience while you navigate through the website. Out of these cookies, the cookies that are categorized as necessary are stored on your browser as they are essential for the working of basic functionalities of the website. We also use third-party cookies that help us analyze and understand how you use this website. These cookies will be stored in your browser only with your consent. You also have the option to opt-out of these cookies. But opting out of some of these cookies may have an effect on your browsing experience.
Necessary Always Enabled
Necessary cookies are absolutely essential for the website to function properly. This category only includes cookies that ensures basic functionalities and security features of the website. These cookies do not store any personal information.
Non-necessary
Any cookies that may not be particularly necessary for the website to function and is used specifically to collect user personal data via analytics, ads, other embedded contents are termed as non-necessary cookies. It is mandatory to procure user consent prior to running these cookies on your website.
SAVE & ACCEPT
wpDiscuz
30
0
Would love your thoughts, please comment.x
()
x
| Reply