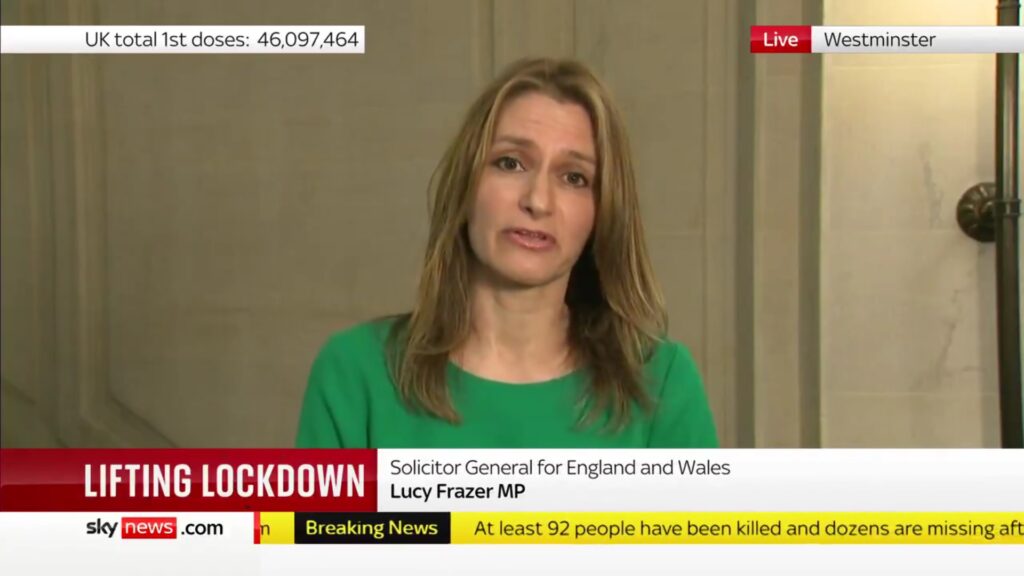 Govt To Look At Reimposing Restrictions If Cases Continue To Rise

SKY News is reporting this morning that the UK government “will look at” reimposing restrictions if infections continue to rise and case numbers become unacceptable.

“I think the Health Secretary’s been very clear, as has the Prime Minister, that we will see infections rise.

But the reason why the restrictions have been taken away is because of the vaccination programme, which will protect people when those infection rates do rise.

And of course if we get into a situation where it’s unacceptable and we do need to put back further restrictions, then that of course is something the government will look at.” 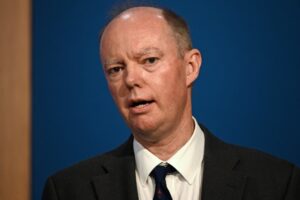 Meanwhile, speaking to a webinar hosted by the Science Museum, England’s Chief Medical Officer Chris Whitty said that the country isn’t “out of the woods yet” and should approach the easing of restrictions with great caution.

“We are not by any means out of the woods yet on this, we are in much better shape due to the vaccine programme, and drugs and a variety of other things.

But this has got a long way to run in the UK, and it’s got even further to run globally. I don’t think we should underestimate the fact that we could get into trouble again surprisingly fast.”

Perfectly healthy people continue to submit themselves for testing, hence the rise in cases. As the PCR test is worthless (it has been thoroughly discredited), it’s fair to say that the vast majority of people who return  a positive test do not have covid or anything else.

I wonder if someone who has been jabbed is even more likely to return a false positive? Just a thought. I’ve no idea.

It really is Hotel California, something which has been said time and again. They will never let us out of this. Only we can stop it. Non-compliance is the only answer, but it needs numbers.

Lucy Frazer says self-isolation is an 'important tool', after more than half a million people were 'pinged' by the NHS track and trace app.

She adds the government are carrying out a pilot to see if people could get tested instead of isolating.https://t.co/WxvFh1p2VW pic.twitter.com/1JbDd9NO6Y

Richie Allen is the host of The Richie Allen Radio show, Europe's most listened to independent radio show and is a passionate supporter of free speech. He lives in Salford with the future Mrs Allen and their two dogs.
All Posts
5 5 votes
Article Rating
Login
Please login to comment
40 Comments
Inline Feedbacks
View all comments

Interesting that the inventor and other scientists have stated that testing people with no symptoms is useless. Also never before in history have we ever diagnosed an illness based on a single test undertaken in less than clinical settings. It would be like going in for bowel surgery immediately after a bowel cancer screening test comes back positive after you’ve done it from home. For really interesting commentary, look up Ivor Cummins videos and commentaries.

In America, Biden and his CDC wench are calling the unvaxxed, murderers. They don’t use the term but its the same import from what they said.

I want to believe that but I don’t dare. Klaus still breathes our air as a free man and he is low on the pyramid.

I will continue to do my own thing as I do not consent, the only thing they will stop me doing is travel abroad.

If these figures are to be believed – and given the almost total compliance for wearing a face nappy, even in the fresh air – then I think they may well be accurate; so this means 35,341,428 people, 67.1% of ALL adults (presumably across the UK) have now had BOTH doses of Uncle Billie’s poison jabs, that’s just over two thirds of the entire adult population! By law of averages that means at least two thirds of the “cases” – “positives”, “false positives” or whatever – must be from those who’ve already had two jabs. Do all these “positive cases” represent actual sick people in the real world, and if so how many? Or is it that thousands of healthy people with nothing wrong with them, no symptoms of anything whatsoever, are simply being told to hide in the airing cupboard, just to be on the safe side!
Although, having said that, the fact so many people have now allowed their innate natural immune systems to be compromised, then perhaps some of them ARE actually suffering ill health effects and flu-like respiratory problems as a direct result of being jabbed. It certainly can’t be ruled out.

i do think wearing face masks for hrs a day on end will lead to breathing problems in a percentage of those people.

Yes, absolutely, I forgot to mention the damage resulting from prolonged muzzle wearing! Where I live in East Yorkshire, there is a large concentration of food processing and manufacturing businesses, many operating round the clock or even 12 hour shifts, fast paced and physically demanding work, sometimes in warm environments. I can’t imagine what it must be like to do such work for hours on end, while your oxygen levels are being reduced, and you’re struggling to breathe properly. I feel great sympathy for those who have had to endure this lunacy for almost a year now. How will this effect their long-term health, only time will tell. I really can’t understand why many more people have not simply just exempted themselves from this madness.

Hi, reports vary wildly. But from research ive done. General consensus worldwide is 10 % of injuries and deaths from medical drugs and vaccines are accurately recorded. I believe that’s been the U.K stance in recent years. I think probely right. It’s fair to times by at least 10.Hope that helps.

Maybe look at Scotland figures, they may be a little more accurate and are certainly higher, may help to get a different estimate of deaths from Englands figures for the UK.

Well worth a read.

Last edited 1 year ago by Jennie
4

& why they so desperately want to plunge this ‘illuminating’ gunk into every living thing with a ‘pulse’ — knowing full well that the majority of humanity don’t need it!!

Oh what a surprise – not. They haven’t gone to all this trouble to take away people’s freedom just to then hand it back.

As those of us who are awake and aware know there are no cases. They are based on a test which is not really a test, which cannot look for anything specific and cannot be used for diagnostic purposes.

“vaccine programme, and drugs “. Interesting word usage, that, because what is a vaccine if not a drug?

Yes an interesting slip of the tongue. They haven’t been using other drugs because they’ve banned them all.

Or Whitty is clearly stating that the ‘vaccines’ aren’t a drug.

i really do suspect the furlough payments will be here longer than people think, afterall, if the restrictions come back, the only way to gain compliance is to pay people all over again. I also think the amount of debt they are getting into is deliberate, if people know this level of debt is terrible and unsustainable, with all their advisers they should know it, and as they know it, why do they keep doing it?

Last edited 1 year ago by Patrice
8

Universal Basic Income is what is being predicted for the surplus population until the vaccines do their evil work. This looked like a crazy conspiracy theory 16 months ago but today its looking increasingly like the grim reality.

In a feudal system, the role of the masses is to do the work. If there is little work because, say, machines can do most of it, then the masses have minimal use or value to the state.
The ruling class will be fine. The educated working class – those with the skills to maintain ‘the system’ will be fine. Humanity will survive.

The skills to control people, to create wars and to invent ever more evil contraptions.

I think were in danger of comparing apples with oranges here. Cosmetic surgery, prosthetic limbs, pacemakers and IVF unlike mRNA gene therapy will not be passed on down the generations through your modified DNA to your children (whether they like it or not). They are also entirely voluntary procedures nobody is trying to force them upon you. I’ve had 3 phone calls from the NHS last week alone trying to coerce me to get a vaccination (sic) but they’ve yet offer me a compulsory pacemaker. Nobody is against medical advancement but what’s happening here is pure malign evil.

It’s true that many things are capable of being used for both evil and benign purposes but those behind all this are anything but benign.

Universal basic income has been talked about for the last forty years but of course they don’t intend to pay that forever to we useless eaters.

Sadly will be paying the grim reaper!!

Not so sure, they will play that one by ear. They are intent on stressing people through all means, including poverty and the food hyperinflation (no furlough scheme is going to cover that) and subsequent famine. Maybe give some food vouchers to the unjabbed in exchange for their compliance at vaccine centres.

This website uses cookies to improve your experience while you navigate through the website. Out of these cookies, the cookies that are categorized as necessary are stored on your browser as they are essential for the working of basic functionalities of the website. We also use third-party cookies that help us analyze and understand how you use this website. These cookies will be stored in your browser only with your consent. You also have the option to opt-out of these cookies. But opting out of some of these cookies may have an effect on your browsing experience.
Necessary Always Enabled
Necessary cookies are absolutely essential for the website to function properly. This category only includes cookies that ensures basic functionalities and security features of the website. These cookies do not store any personal information.
Non-necessary
Any cookies that may not be particularly necessary for the website to function and is used specifically to collect user personal data via analytics, ads, other embedded contents are termed as non-necessary cookies. It is mandatory to procure user consent prior to running these cookies on your website.
SAVE & ACCEPT
wpDiscuz
40
0
Would love your thoughts, please comment.x
()
x
| Reply