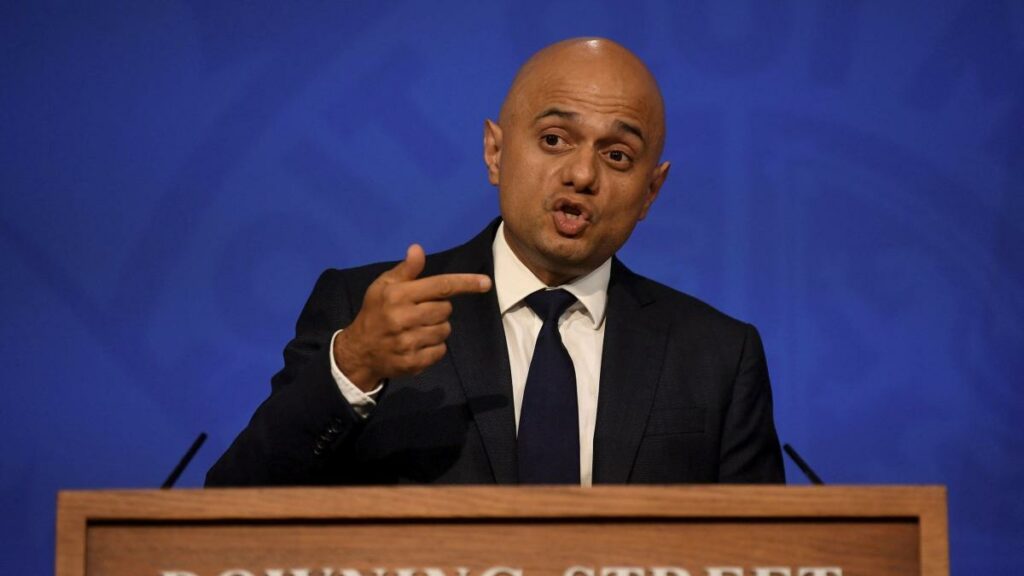 Javid Warns The Unjabbed “Come Forward Or Lose Your Freedoms!”

What a thoroughly wretched, snivelling little thug Sajid Javid is. Speaking at a press conference yesterday afternoon Javid, who masquerades as the UK’s Health Secretary, told the nation to get jabbed or he would impose covid restrictions this Christmas.

What a jumped-up little toad Javid is. He said that covid cases might reach 100,000 a day in Winter. Therefore when we, the great unwashed are offered a booster jab, we should come forward immediately.

Javid actually said we should rush forward, “not just to save lives, but to keep your freedoms too.” There’s no ambiguity there. It’s simple, get jabbed or lose your freedoms. He took a pop at the estimated 5 million people who have not yet had a single jab. Javid said:

“If not enough people get their booster jabs, if not enough of those people that were eligible for the original offer, the 5 million I’ve talked about that remain unvaccinated, if they don’t come forward, if people don’t wear masks when they really should in a really crowded place with lots of people that they don’t normally hang out with, if they’re not washing their hands and stuff, it’s going to hit us all.

And it would of course make it more likely we’re going to have more restrictions. If we want to secure these freedoms for the long term, the best thing that we can do is come forward, once again, when that moment comes.”

What a disgusting little Nazi. My freedom is not his to give or take away. How dare he or anyone else threaten to impose restrictions on my right to travel? How dare he tell me how many people I can entertain in my home? How dare he attempt to force medicate me and my family?

The gloves are off now. The masks haven’t slipped from the faces of these thugs. They’ve thrown them away. It’s on now.

Richie Allen is the host of The Richie Allen Radio show, Europe's most listened to independent radio show and is a passionate supporter of free speech. He lives in Salford with the future Mrs Allen and their two dogs.
All Posts
4.9 9 votes
Article Rating
Login
Please login to comment
20 Comments
Inline Feedbacks
View all comments

Just the fact they think they can remove freedoms is bad enough.

Could the powers that be please explain how someone who refuses to have an untested, unsafe, unnecessary jab which is basically genetic engineering and has killed and injured many thousands of people is selfish.

They are so desperate to get everyone jabbed up before people start dying with the onset of winter bugs, they must be crapping themselves now because their only thing now is to make everyone who have the 2v hate us as being selfish. The fact that the jabbed are still able to catch it and pass it on just hasn’t sunk in to any of them. If you mention it to them they’ll just come back with “but I won’t get it as bad as I would if i hadn’t had it”.

I call him Savage. No one is telling me what to do. They can stick their rules, they do not abide by up their jacksy for all i care anymore. I have not worn a mask and no jabs and i intend to stay that way. No dodgy experiment is going to cause my death. Thats on my watch.

I ask myself regularly ‘how or when can this ever end?’ The answer to both questions is simply: Never. This nonsense will never stop now. The so-called pandemic is perpetual. Will the WHO ever declare that the ‘pandemic’ is over? No. Too much is riding on the engineered state of emergency. Will the drive for enslavement of humanity ever stop? No. It’s fucking never-ending.

These MPS and there masters, to whom they bend over and the Tyrannical policy’s they have introduced. Are the real threat to humanity, not an imaginary virus or climate change. And all was made possible by a public than en mass still has a blind faith in authority. Regardless of how illogical or insane life increasingly becomes. Without the general publics apathy and complacency, the events that have transpired since March 2020, would never have been possible. Because from day one, people should have put there fears aside and said ‘ No we are not going to except this.! ‘

From the very first day that “lockdown one, Tyranny begins” was being talked about. Before i had any idea whether the virus was real or not. Or whether it was deadly and going to wipe out millions. I told the woman on the checkout till, and anyone who would listen who i knew.

‘ This is going to be used as an excuse for Fascism. And we should never except our loss of freedoms under any circumstances. Regardless of the cost. As it would set a president. ‘

I said if they do this now, what are they going to do next time? And i also kept saying, if this is the answer to viruses, how come we have never done any of this before.? Everyone just looked at me with a blanc expression on there faces, and this is where we are now. Living in a country and in a world that bears no resemblance to the pre covid era.
A world where millions of mask wearing slaves, are holding out there arms. As we all stand on the precipice of the Abys.

Easy. We are going to blame the unjabbed for the inevitable winter lockdown, come what may.

HUMANITY vs INSANITY – #81 : DEATH of DEMOCRACY.
(Exposé of Sajid Javid excellent info from 5 yrs ago)
Sajid Javid, MP for Bromsgrove, is a Muslim, (In name only),
‘Friend of Israel’ who has stated, “If I had to leave Britain to live in the Middle East, I would choose Israel. Only there would my children feel the warm embrace of freedom & liberty.”
Remind me again who these socio-psychopaths are supposed to serve?

Last edited 9 months ago by Jake
10

Exposé of Sajid Javid is from 14 min into the video.

May 2012… during a day long visit to south Israel.. to see the different type of rockets launched from “Gaza!!” 🤔…

No doubts Javid has fond memories of this!!

Sad to learn that Ian R Crane is no longer with us, but at least he managed to expose this little weasel and many others during his career.

He compares Javid to ‘The Hood’ from Thunderbirds who’s occupation is described as a ‘Criminal & Terrorist’ on Wikipedia no less… And how accurate and prophetic this comparison has turned out to be.

Javid reminds me of the Irish equivalent ‘Stephen Donnelly’ who has also only recently been catapulted from nowhere into mainstream politics..

Here’s an excellent exposé exploring his ‘humble origins’ Jake, if you fancy a good read..

Yet another little tyrant working tirelessly for the hidden hand..

And here’s the photo Ian Crane put up in the above video he made five years ago exposing “The Hood”.

Thanks for sharing Jake!
👍

Hands up who didn’t see this coming?
There are news reports today of doctors complaining that the government is not doing enough about Covid. Think about that. It is the job of doctors to address health issues, but they are abrogating that responsibility to the government.
And, of course, those articles are also simple theatre. There are loads of doctors who don’t feel that way, but they don’t get a voice in the corporate press.

He’s a toad alright, but the fact is we wouldn’t be where we are if people hadn’t acquiesced. People disgust me, sorry to say.

I completely agree Alex its really quite depressing how gullible the public have now become. At this point the future is looking very bleak.

The threat level to the public from MPs has has reached substantial.

There is no threat from the MPs. The threat comes from those who capitulate.
Leaders, no matter how psychotic, utter only words. The power invested in those words comes from the public.

Sajid Javid “…he joined the Conservative Party. Working in banking, he rose to become a Managing Director at Deutsche Bank…” -https://en.wikipedia.org/wiki/Sajid_Javid
This thug’s CV reads like a wanna-be capo-hitman for the Gangster-Banksters in the *City of London*.
Yeah, deutsche bank ; money-laundering firm for the 4th Reich.
—
Definition- “A caporegime or capodecina, usually shortened to capo or informally referred to as “captain”, is a rank used in the Mafia (both the Sicilian Mafia and Italian-American Mafia) for a made member of an Italian crime family who heads a “crew” of soldiers and has major social status and influence in the organization. Caporegime is an Italian word, which is used to signify the head of a family in..”