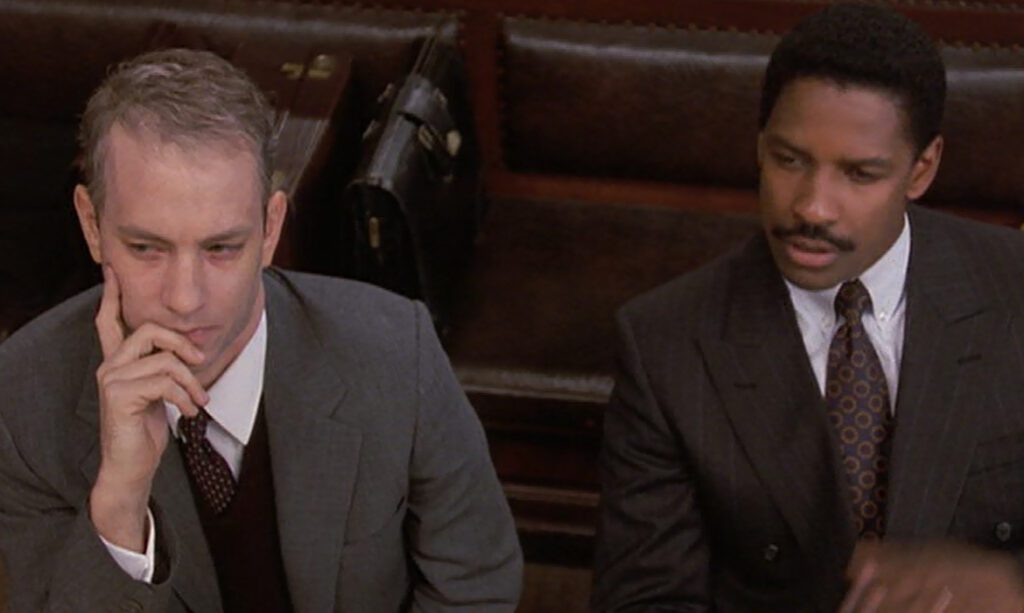 Tom Hanks: “I Couldn’t Play A Gay Guy Today And Rightly So!”

Tom Hanks won his first Oscar playing a gay lawyer who sues his firm for wrongful dismissal. However, Hanks has said that he couldn’t play the role today, as it would be inauthentic for a straight guy to play a gay man.

“Let’s address, ‘Could a straight man do what I did in Philadelphia now?’ No, and rightly so. We’re beyond that now, and I don’t think people would accept the inauthenticity of a straight guy playing a gay guy.

“It’s not a crime, it’s not boohoo that someone would say we are going to demand more of a movie in the modern realm of authenticity. Do I sound like I’m preaching? I don’t mean to.”

By Hanks logic, an unordained  person shouldn’t play a priest or someone who has never seen the inside of a gym should never play a boxer.

I bet Hanks doesn’t have too much support among gay and lesbian actors and actresses though, because what’s good for the goose, right?

Sarah Paulson, Zachary Quinto and Kristen Stewart, to name just three, would soon see their careers hit the skids if they were told they couldn’t play straight characters because it would be viewed as inauthentic.

Richie Allen is the host of The Richie Allen Radio show, Europe's most listened to independent radio show and is a passionate supporter of free speech. He lives in Salford with the future Mrs Allen and their two dogs.
All Posts
5 6 votes
Article Rating
Login
Please login to comment
16 Comments
Inline Feedbacks
View all comments

It could be argued that the desire for ever increasing authenticity is a risky road. After all, snuff movies are authentic, but the vast majority of sane people wouldn’t want that outcome.

Still, this kind of rhetoric is either more Hollywood fashion made manifest, or part of a larger programming model prepping the way for people to be the star of their own interactive film in the Metaverse.
As Richie said on his show, Total Recall (or Red Dwarf’s ‘Better than Life’) on steroids.

I’m currently reading the first book in the ‘Otherland’ series, written by Tad Williams in 1996 and it reads very familiar. I highly recommend it.

Thats all great .I’m going to film a short with a pregnant character over 9 months so everything is autentic and kill the baby in the last week so the baby dying scene is perfectly correct but we wont tell the actriz so its a genuine scene .

Laurence Olivier once famously said to Dustin Hoffman: ‘you just act, dear boy’.
It was Olivier’s subtle criticism of the method actor approach.

In my opinion, the alleged drive for greater ‘authenticity’ risks destroying the film industry. Period dramas, Westerns, fantasy, science fiction, superhero films, and horrors would all have to go – unless the industry can ressurrect people from the past to give an authentic feel to those period dramas and Westerns; can find real dwarves, elves, orks, trolls, and aliens for the fantasy and science fiction; real monsters for the horrors; or real people with super powers.
The claim for more ‘authenticity’ is patently absurd. Which, I would argue, suggests something else is at play.

Some might argue that it has something to do with the over used concept of ‘representation’. But, gossip and innuendo aside, the Hollywood ‘elite’ represent the dizzying heights that can be achieved through talent, hard work, and determination to achieve a goal, irregardless of skin colour, sex/gender, or sexual preference. And that is how it should be – not just in Hollywood, but in all jobs. Without it we risk ending up with dreary second rate films and actors, just as we are increasingly getting homogenised, dreary scripts.

Personally, I don’t think this has anything to do with ‘representation’, but is rather about a low risk, maximum profit business model.
Hollywood in particular, aims its films at a global market. Most of that global market doesn’t have our more liberal attitude towards homosexuality and homosexuals. Just as films with Cary Grant fell out of favour in the late 1980s after it was revealed he was gay, so there is a risk of gay and lesbian actors finding themselves out of work in a modern, increasingly global, film industry, and films like ‘Philedelphia’ being consigned to the dustbin of film history.
Likewise, much of the global market (in particular, China and India) doesn’t view black people and black characters the same as we do. This may account for why original black characters, particularly comic book characters (of which Blade, Spawn, Luke Cage, and Black Panther are the most well known) are not getting much focus. The financial risk may be viewed as too great, despite many black people turning away from the tokenised ‘black washing’ of their favourite white characters.
Just as there is a risk of job loss for gay and lesbian actors in the not too distant future, so too is there a similar risk for black actors.
Unless, of course, giants like Hollywood move their business model away from expensive, ‘for cinema’ productions and adopt a cheaper, straight to streaming model where they can target specific ‘representative’ groups.

Many years ago I believed that Hollywood would eventually move to convincing high quality animation. Such a direction still remains a possibility, and perhaps even more so to satisfy ‘representation’ – as so much more is possible with animation and any representative of a ‘group’ can do the voice over at a fraction of the cost of an actual actor.

There’s a phenomena in Hollweird known as ‘gay for pay’. Actors such as Clarke Gable and the like bent over on the casting couch for producers and studio heads alike especially at the beginning of their careers. This has an echo of Tom Hanks’s statement in as much as it’s ok to turn ones back on what ‘got you to the top’ the moment you arrive.

Then he would be ok to play a peadophile.

Wouldn’t that make him a method actor? 🙂

I wonder what Hanks would think of the authenticity of Jodie Turner-Smith acting in the role of Anne Boleyn.

Good call Robert, i was trying to think of an example when i wrote my piece below. I completely missed this, just looked up online now. Complete insanity. By the way, i dont know if you have ever seen The Tudors. I believe one of the best drama series there has been. Reputed to be very accurate portrayal of Henrys Reign. The actress in that did a wonderful Ann Boleyn. A must watch for anybody interested in history, or the true nature of politics or power. [ Also highly entertaining} As i believe things work the same way to this day. The only difference being they hide things better. Available on channel 4 website.

Good point. That was ridiculous and wrong on so many levels.

So you won’t be able to play anything in future except a middle-aged actor then Tom. Isn’t playing people who can be different to you what acting is?

sort of puts all those workshops and acting skills honed for versatility to waste as you now can’t use them. Will this extend to accents too soon? You can’t play a northerner unless you are from “up north”?

If your guest Isaac, Isaac Kappy (RIP) is to be believed, Hanks should have no problem playing the part of a nonce though, eh?

To say that its not authentic for a straight guy to play a gay man is indeed ridiculous. The clue is in the term acting. Actors are playing parts, its make believe and there Job is to make the audience believe what their portraying, for the juration of the performance.

I agree with Richie that you wouldn’t get the same consideration the other way round. As there would be to few parts for gay actors, so they would soon be complaining. This kind of hypocrisy can be seen with those that call for black actors to play traditionally white roles like James Bond. Yet if a white actor asked to play a black role, there would be an uproar.

Never thought it’d come to this though
If the party ends
Where the hell would we go go.

Not sure i can answer that Fred.

However at a fictional wedding on Hollyoaks last week, the service commenced with the announcement ” Lady’s and Gentlemen and Non binary folk. We are gathered here today.”

Time for a nice cup of tea and a lie-down in a dark room i think.

I could be wrong, but it seems to me that ‘black’ has replaced the old ‘red’ in terms of political symbolism, while ‘white’ continues to represent the old symbolism (ie, Nationalism).
I’ve reflected on this quite a bit, and through the old Bolshevik/Communist (globalist) symbolism much of the modern rhetoric actually makes a modicum of sense.
So, allegations of ‘white supremacy’, like facism and Nazism, has nothing to do with skin colour but is, rather, a term to denote nationalists; and black actors playing traditionally white roles has less to do with the actors (or roles) as it does about symbolic representation of Internationalism/Globalism.
It’s not about people – it’s about a cause.